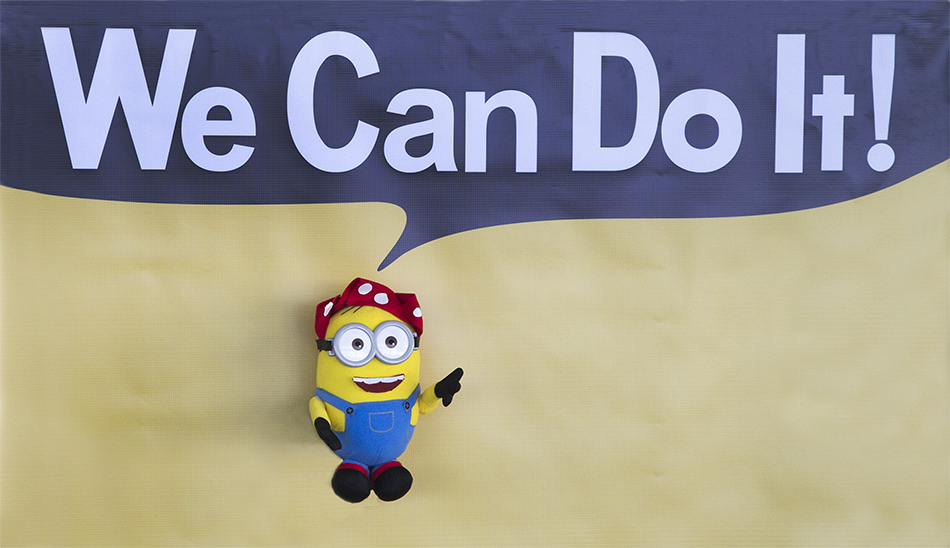 They came from near and far—real Rosies, Rosie emulators, canine Rosies, baby Rosies and even male Rosies.

First it was 776 Rosies gathered in May of 2015 at the Willow Run Bomber factory in Ypsilanti, MI, then in August of 2015 1,085 Rosies claimed the record at the Rosie the Riveter Memorial in Richmond.  Not to be outdone, just a few months later on October 24th, the Willow Run Rosies retook the record with 2,096 Rosies recognized by Guinness World Records.

Not to be outdone, the Richmond Rosies put together 2,265 Rosie at the Craneway Pavilion to retake the record.  [The Craneway Pavilion was, before WWII, a Ford Assembly Plant but when WWII started it was converted to build tanks and other armored vehicles.]

While The Swingin Blue Stars [ http://www.swinginbluestars.com ] entertained the thousands of Rosies with their wonderful repertoire of songs from the era, family members, community leaders and fans, Rosie after Rosie lined up to have their photos taken in front of the many ‘We Can Do It’ posters lining the wall.  Cell phones were put to a test to see just how many photos could be taken.

The time came for the Rosies to gather within the enclosed area where they could be counted.  Speeches from Congressman Mark DeSaulnier, Supervisor John Gioia and Mayor Tom Butt set the stage before the count was made.

All that waits now is for the Guinness people to certify the record.

And now, we wait for the Ypsilanti Rosies to continue the rally and try their best to reclaim the title.

The Richmond Rosies have but one thing to say:  Bring it on because We Can Do It!