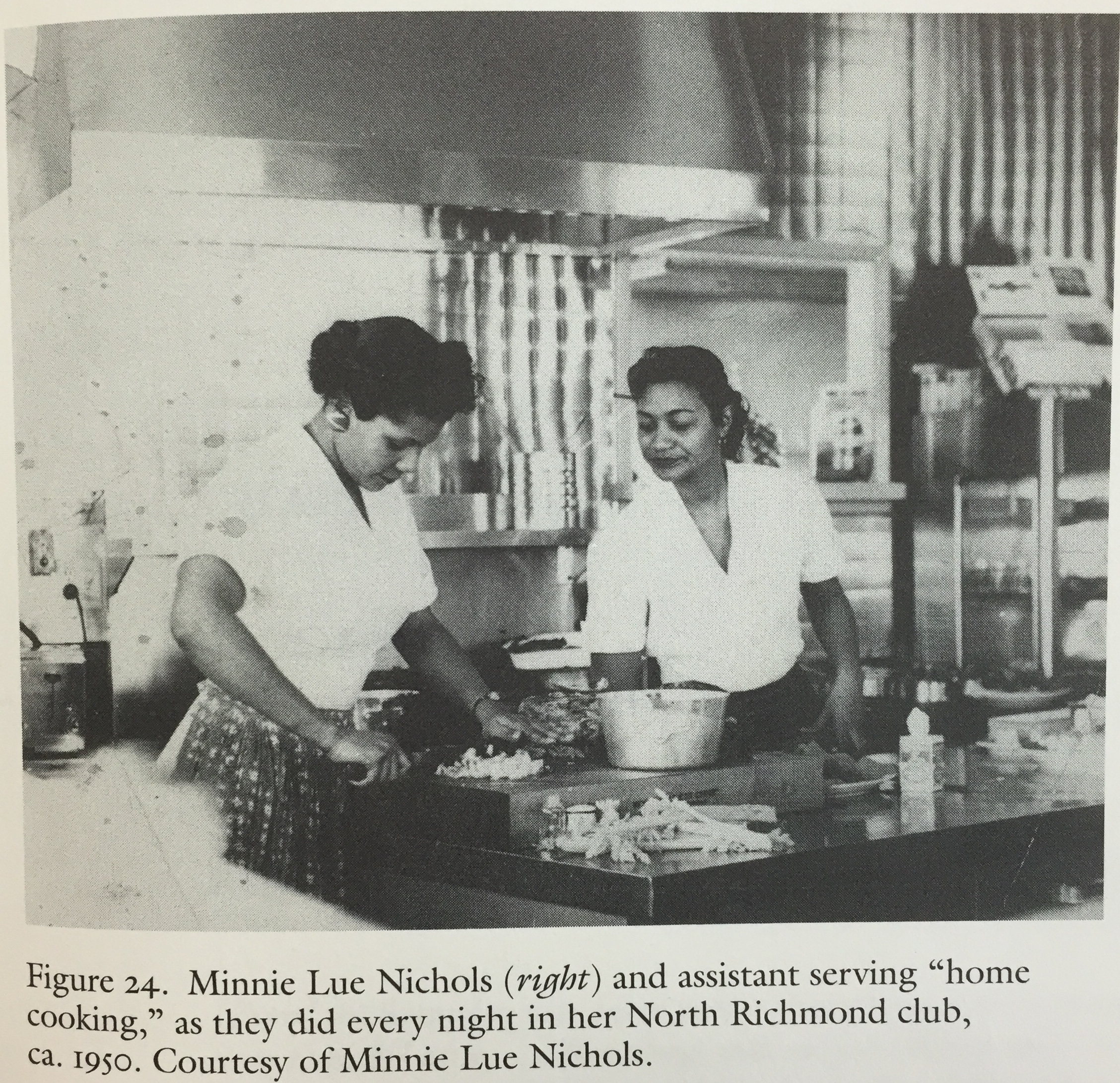 Richmond is a bastion of rich African American history. Starting with the earliest families who moved to the City for jobs in the shipyards during WWII, up to their descendants, many of whom live in Richmond today — their experiences are varied and have helped shape Richmond as we know it.

To honor this heritage, here are the stories of five African Americans who left their marks in Richmond.

In running her restaurant and blues house, Minnie Lue’s, Nichols became a community leader and a cultural figure.

In “To Place Our Deeds”, Shirley Ann Wilson Moore explains that in Richmond during the war, “The blues clubs were the place where the link between power and culture was most evident. Music places served as large cultural hubs often mixing whites and black, but a lot of the black new comers to Richmond wanted undiluted urban blues. North Richmond blues clubs were their hubs.”

Of the appeal of her blues house and restaurant, Nichols said at the time, “Well, if you’ve never felt the blues, I can’t hardly explain. You know how it feels… It was a blues crowd, a beautiful crowd. When the house is full and they’re rocking with members of the band, you enjoy it,” according to Wilson Moore.

The cultural capital of North Richmond blues clubs, like Minnie Lue’s, faded as Richmond’s population dwindled after the war, but Nichols’ establishment proved the most enduring. Minnie Lue’s stayed open until 1983, when Nichols passed away, and it played music until the very end.

Judge George D. Carroll
Judge George Carroll began his career in Richmond government in the 1950s, a time when the City’s doors to political power were closed to African Americans. In doing this, he was a pioneer.

When Judge Carroll first moved to Richmond from New York, he encountered a city that was very different from the one we know today.

"When I came to Richmond at first, Richmond was divided into black and white sections. I remember going down Cutting Blvd, in the public housing. On one side of Cutting Blvd were the white projects, and on the left side would be the black projects, and there were restrictive covenants still in existence here in Richmond. So I felt that this would be a good place for me to practice" stated Carroll in an interview with present day City Councilmember Nathaniel Bates for the KCRT series.

Carroll described the formation of a human relations council to ease racial tensions as his major accomplishment as mayor.

When asked by Councilmember Bates if he had any advice for young people who admired his success, Carroll emphasized the importance of education.

"Education is the key to your status in life,” Carroll said.

Betty Reid Soskin
Betty Reid Soskin worked in the Richmond shipyards, but she didn’t know much about what was going on. Soskin wasn’t welding; she instead had an administrative job that largely kept her out of the loop of the record-setting operation under way just feet away.

Soskin returned to the shipyards years later as a park ranger at the Rosie the Riveter/ WWII National Historical Park. In her second time around at the shipyards, Soskin has been pivotal to the direction of the national park, the only in the country to be within a densely urban city.

In an interview with RFR, Soskin reflected on her impact on the park: “I think that my work has helped to shape the park. I came in at a time when there were only four people working here, and now there are 53. I’ve had an impact, and I really value that. I think that I helped to shape the direction of the park. It’s a park with integrity. It’s honest. If you notice the exhibits, there are no heroes here. It may be the only park in the country devoted to ordinary people, and I helped to establish that."

Today Soskin is the country’s oldest park ranger, at 94 years-old, and she still gives regular presentations at the Rosie museum. This past Christmas, Soskin introduced President Barack Obama at the annual tree lighting ceremony.

Ellis Myers
A photographer who captured the joy of life, Ellis Myers was renowned in Richmond during WWII for being the man to hire to capture everything from weddings to warships — even though he didn’t think of himself as a photographer.

Instead, Myers saw himself as a veteran. He moved to Richmond in the 1940’s to escape the racial discrimination of his home state of Louisiana and he worked as a driver for the Veterans Administration in Oakland and San Francisco.

On his move to Richmond, Myers told the San Francisco Chronicle in 1998 that, “I was fed up with the South. Back there, you were not free. You didn’t step out of your place. You knew you were secondary.”

In Richmond, Myers lived with his wife in the Canal apartment complex off Cutting Boulevard. While the city was not free of racial prejudice, Myers and his wife found a welcoming African American community in their new city.

Myers passed away in 2015, but 15 years prior he donated a number of his old photographs and negatives to the Richmond Museum of history. To learn more about Ellis Myers, click here.

Judge Patricia Ann McKinley
Judge Patricia Ann McKinley, the first Black woman to serve on the Bay District Municipal Court, grew up in Richmond, and spent most of her life in the Bay Area. She was born in San Francisco, went to Harry Ellis High School in Richmond, majored in French at UC Berkeley, and received her law degree from Boalt Hall School of Law in 1971 (what is now UC Berkeley’s law school).

She was not, however, a provincial woman. McKinley was fluent in French, having spent a year studying in France, and traveling in Africa, the South Pacific, Turkey, and Japan.

After establishing her law practice in Oakland, McKinley’s career advanced remarkably quickly, and in 1980 she was asked to work at the Richmond City Attorney's office. Following this, she was appointed in 1982 by Governor Jerry Brown to be a Judge on the Bay District Municipal Court. She was only 33 years-old at the time of her appointment.

McKinley thrived in her new role, as it allowed her to help people with little power, including members of ethnic minorities.

"People will be able to listen to people they can identify with,” said McKinley upon becoming Judge according to an article in the Oakland Tribune printed in 1986. "Although Bay Municipal Court has a heavy case load, let the defendants say what they have to say so they can have their day in court."

She was known as a liberal Judge, although she was respected by her more conservative colleges and prosecutors, according to Robert Kochly, Chief Richmond Prosecutor, at the time of McKinley's death.