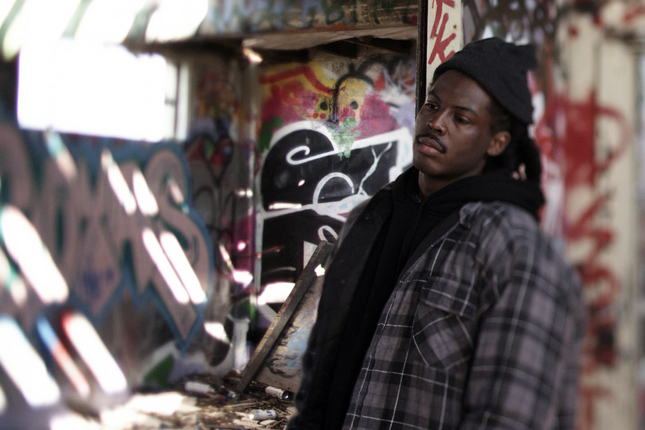 Donté Clark and Deandre Evans sit on the curb in teary-eyed silence during a powerful moment captured in “Romeo is Bleeding”. Their friend has just been shot and killed on a street in Richmond much like the one they are sitting on.  He’s another victim of the turf war in Richmond. The documentary, which premiered last week at the San Francisco International Film Festival, is a poetic and impassioned response to the years of street violence that have plagued North and Central Richmond.

The loss of their friend comes as the two prepare to put on Clark’s production of Shakespeare’s “Romeo and Juliet”, reworked to fit the streets of Richmond. Instead of the Capulets and the Montegues, it is North Richmond versus Central. The camera follows the crew behind the production from Richmond Artists With Talent (RAW Talent), an after school performance art program.

As they write their monologues and prepare for the play’s premier, actors Clark, Evans and D'neise Robinson work through anxieties about putting on the production and about the gun violence which serves as their tormentor and inspiration. Director Jason Zeldes follows their progress, weaving in retooled Shakespearean prose with imagery of a rough industrial setting where death by gun violence is a common occurrence.

North Richmond, a 1.5 square-mile piece of unincorporated land in Contra Costa County, has an average of five homicides a year, a number out of proportion with the area’s small population. Residents of North Richmond maintain a connection to the City of Richmond, though they are not recognized by the city’s jurisdiction. If it were part of the city, Richmond’s crime rate would be significantly higher than it appears today.

The turf war documented in “Romeo is Bleeding” is believed to stem from one dispute over a damaged car in 2003. The Richmond Police Department believes half of the homicides in the city are connected to this conflict.

Clark, who was named one of Richmond’s Poet Laureates last year, toes the line between being a native of this area and a fighter against its current state.

"What is happening is not gang violence, but family-on-family violence," Clark says in the film.

The production of the play, titled “Té’s Harmony”, and the documentary are pivotal in exposing this situation.

“To take viewers to the block where we played with our cousins, and then in the next clip they’re dead…A lot of people understand where we’re coming from now and the issues in the city,” Clark explains.

Molly Raynor from RAW Talent helped facilitate the play and the documentary. She supported Clark’s growth as an aspiring poet at the after-school program, and she introduced him to the director.

To Raynor, the strength of “Romeo is Bleeding” comes from its locale.

“Power comes from within the community,” she said. “People who grow up in Richmond are the ones who know what’s best for Richmond. I hope this inspires [Richmond youth] to find their power, because the world needs to hear you.”

To learn more about “Romeo is Bleeding” and RAW Talent, click here.