All Gov: Richmond Stumbles Through a Slow-Motion Public Housing Disaster 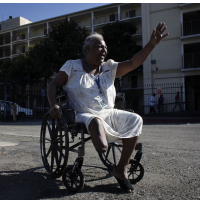 As of Thursday evening, around 7:10 p.m., more than 100 seniors and disabled Richmond residents had spent 302 days, 23 hours, 14 minutes and some odd seconds in the worst low-income public housing complex, run by one of the nation’s worst housing agencies, since authorities labeled it uninhabitable.

The Center for Investigative Reporting (CIR) knows this because it has a running clock on its website tracking the fate of the 150-unit Hacienda Public Housing Complex since February 18. The Richmond City Council voted in March to give all the residents vouchers and kick them out of the moldy, rodent-plagued, roach-infested broken-down buildings. But it hasn’t. The city didn’t have a plan or the money.

“Clearly, we’ve failed in some of our public housing,” Mayor Gayle McLaughlin said at the time. That might be a bit of an understatement.

The U.S. Department of Housing and Urban Development (HUD) has had the Richmond agency on a “troubled” list since 2009. The national Public Housing Assessment System (PHAS) rated it among the nation’s 45 worst (pdf) in 2013. The Contra Costa Grand Jury reportedly began an investigation in October.

Richmond Mayor-Elect Tom Butt was a city councilman in April when he told the Contra Costa Times he wasn’t convinced the problem was as bad as people said and blamed HUD for whatever mess there was.

“(HUD) wants us to run a Champagne project on a light beer budget,” Butt said.

By then, CIR’s Hacienda-inspired “Subsidized Squalor” series (19 stories at last count) had begun and Richmond was embroiled in another public battle over conditions in a city whose largest employer is Chevron. The petrochemical giant and its supporters squared off with progressive elements in November in a fight for control of the city council. Chevron lost, but fighting over the giant oil refinery in the city is ongoing.

Richmond officials only belatedly found out that a rail terminal in Richmond was being used to offload oil from train tanker cars for transport by truck to a refinery in Martinez, raising environmental, safety and ethical questions. Crude-by-rail is rapidly escalating in popularity as an alternative to shipment by pipeline and ship, outstripping sluggish attempts to regulate it at the local, state and federal level.

City officials made a formal application to HUD in May to help pay for the relocation of Hacienda tenants and tear down or restore the complex. It is still waiting to hear from the agency.

One resident, Clarence Malbrough, told Richmond Confidential he wasn’t too optimistic about the outcome. Tim Jones, executive director of the Richmond Housing Authority (RHA), is a “great talker,” the 16-year resident said. “He told us back in April they were going to tear it down, keep the land, and build a new place that we’d have first dibs on. . . . They discussed a better future for us. It’s the same bull-crap month after month, year after year.”

Reposted from All Gov