Getting to know the Richmond Wrecking Belles 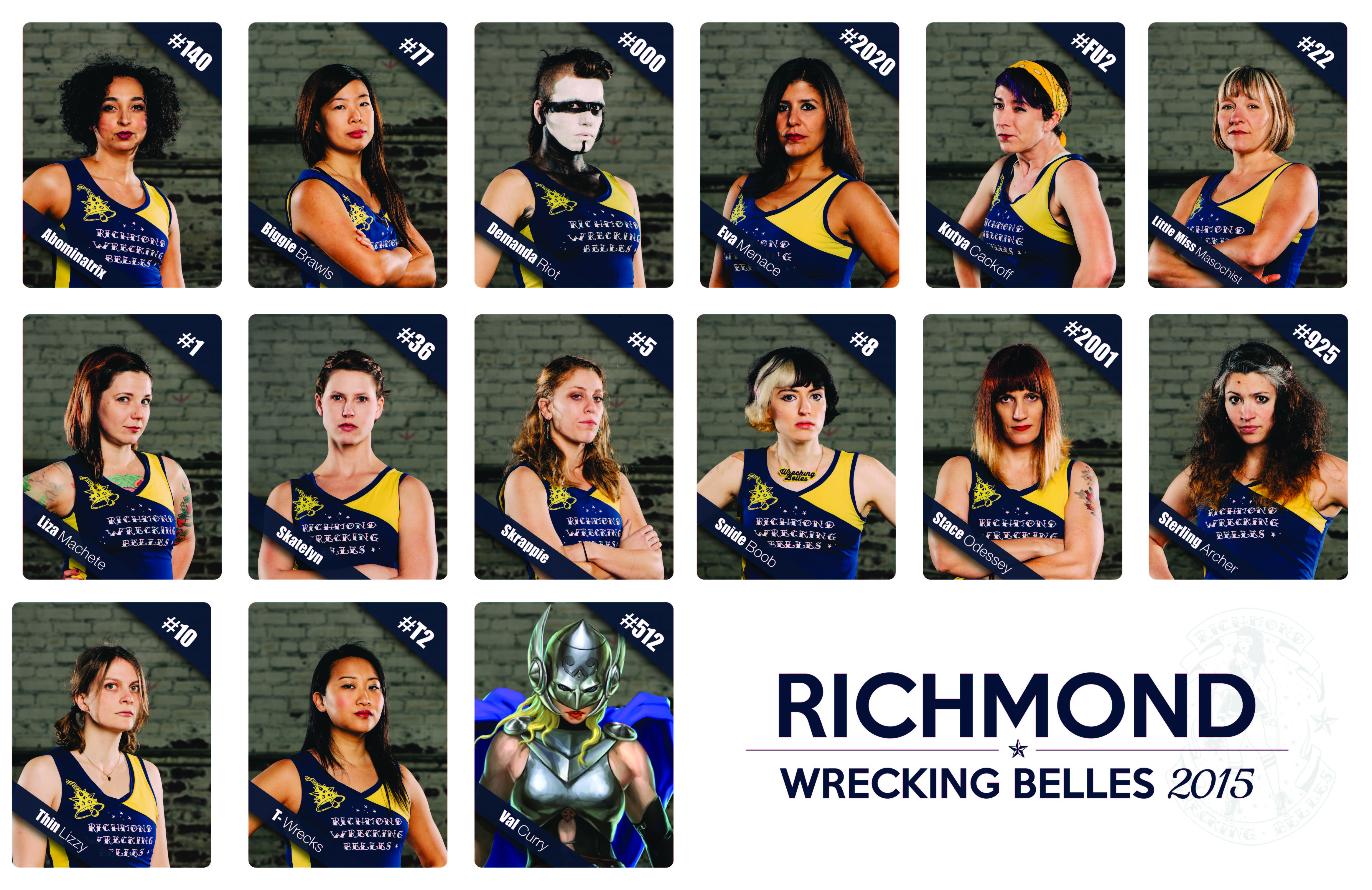 The Bay Area Derby Girls are back. The 2015 season of our local roller derby league kicks off on Saturday with a double header, and before the action starts Radio Free Richmond talked with players from the Richmond Wrecking Belles to find out what makes them tick.

To learn more about the Richmond Wrecking Belles and to get tickets for Saturday's game, click here.

1) How did you come up with your skating name?
Sterling named me. Something kind of reference to my size I think :)

2) What got you into the Wrecking Belles?
I'm not sure, but Sterling and I were both drafted at the same time. I think they were covering both ends of the height spectrum

3) What is your signature move?
As a league we've been doing this move where you sort of sink back into an oncoming player to suck all their speed. I'm a fan of it since I tend to fit right in their lap like a little spoon. It usually sucks for them.

4) How much time do you dedicate to skating during a season?
I skate 4-5 days a week and cross train 2x a week. So a good amount.

5) What is the most intense moment that has happened to you during a game?
Last season in our first game versus Oakland I was an alternate and was notified the day of the bout that I would play. It was incredibly nerve wracking because it was my first home team game with the Belles and my first time playing in front of a large crowd of people I didn't know.

6) When you have a team of skaters rushing at you to take you down, what keeps you going?
Roller derby isn't an individual's sport you have to keep going for the people that are on the track with you.  As an individual you may be having a bad jam but if you give up you guarantee that your whole line will have a bad jam.

Sterling Archer
2nd season with the Belles
Originally from Connecticut

1) How did you come up with your skating name?
It’s the name of the protagonist of my favorite animated series, Archer, who happens to be a secret spy. Aside from the name just sounding cool, I, like Archer, love Burt Reynolds. I've always thought Reynolds looks like my dad. I think it’s the mustache.

2) What got you into the Wrecking Belles?
Hmm…. ask my coach?
But I guess you’re asking me so I’d have to say it’s because I’m easy to work with and have a good attitude. (This sounds like I’m interviewing for a job). But seriously it’s really important to not let a bad a jam sit with you. You have to able to just let what just happened 30 seconds ago not affect the next 30. I try to do that as best I can.

3) What is your signature move?
I’m not sure it’s a move but it’s more just a trait. I try to be really vocal on the track, so as annoying as it might be I’m constantly trying to narrate or communicate what is happening. I’m sure I sound like a squawking bird, but my teammates tell me it helps.

4) How much time do you dedicate to skating during a season?
For skating I try to attend as many practices as I can. So in a week that could be anywhere from 8-10 hours. In addition to skating, my workouts include weight training and conditioning. In addition to the physical stuff, I also have committee jobs to help run our organization.  The awesome thing about our league is that we are a skater owned and operated 501(c)(3) non-profit that is entirely volunteer-run. So not only are our skaters amazing athletes, but we also have a wide and multidisciplinary set of skill-sets that help our organization grow and run efficiently.

5) What is the most intense moment that has happened to you during a game?
The most intense moment for me didn’t happen during a game but rather a few days before a bout, when my coaches told me I would be jamming in a game that I didn't even think I was going to be playing in. Talk about SUPER stressful. I was definitely not expecting this for my first game ever with the Belles  I wish I could have recorded my inner monologue when I found out. I’m sure the amount of F-bombs I dropped was absurd.

6) When you have a team of skaters rushing at you to take you down, what keeps you going?
I think about my diet: “All I’ve had today is like, six gummy bears and some scotch.”

1) How did you come up with your skating name?
I wanted to use my real name somehow because I don't feel I need an alter ego; I am who I am 100% of the time. I am into retro sci-fi/atompunk and Stanley Kubrick is one of my favorite directors so Stace Odyssey seemed like a good fit for me. And of course my number had to be 2001.

2) What got you into the Wrecking Belles?
I wanted to be on the best team in the league. Getting on the Belles was a combination of doing what I could to make it happen, good timing, and luck.

3) What is your signature move?
I love offense — I'm a team player through and through and helping out my jammer makes me happy.

4) How much time do you dedicate to skating during a season?
I go to practice 3-5 days a week.  But derby is more than just skating — I also dedicate all of my off-skate workouts to derby training, and as BAD's ED of Operations who just built 2 websites for our league, I spend a lot of time dedicated to our league other than just skating.

5) What is the most intense moment that has happened to you during a game?
Every jam is intense — I skate like every jam can make or break the bout for my team.  Before the whistle blows before each jam is always the most intense moment for me, when everyone is crammed up against each other on the jammer line like race horses waiting for the gun to go off.

6) When you have a team of skaters rushing at you to take you down, what keeps you going?
Confidence in myself and my teammates.  The great thing about the Belles is that we always support each other on the track so I never feel like I'm out there by myself, and that keeps me going

1) How did you come up with your skating name?
Demanda Riot combined a fierce imagery and wrapped up a more subtle homage to a drag queen I knew once upon a time.

3) What is your signature move?
Devouring Jammer souls.

4) How much time do you dedicate to skating during a season?
4-5 nights a week and 1-2 weekends a month.

5) What is the most intense moment that has happened to you during a game?
The final bout of 2014 season between the Wrecking Belles & Oakland Outlaws.  For the majority of the game the Wrecking Belles held a substantial lead against the Outlaws. That point spread was closed in the last 5 minutes both by some extraordinary skating by the Outlaw jammer Bricktator and the Wrecking Belles Jammers going to the penalty box (giving Oakland the ability to score points unopposed) and blocker penalties.

I was the jammer for the last jam, beginning the jam from the penalty box. The Wrecking Belles still had a lead, so I knew that I had to at the very least keep Bricktator from scoring enough points to close the differential. I had to at least match her, scoring pass for scoring pass. Fast forward into that jam, the differential had closed to Oakland being 3 points away from the Wrecking Belles score (a full scoring pass with jammer in the box could earn them 5 points and the win). Bricktator was sent to the penalty box, leaving me the lone jammer on the track, and I too gained a penalty and so was heading to the penalty box.

When both jammers are in the penalty box, the jammer in the box is freed once the second jammer sits down. Bricktator was also still seated in the penalty box which is a visual cue that she had more than 10 seconds remaining to serve of her 30 second penalty.

As I skated towards the box I saw that there was 15ish seconds left in the game.  This would be plenty of time for Bricktator to make a final scoring pass and win the game for the Outlaws.  I was faced with the decision, do I sit in the box and give Bricktator the chance of scoring those points and winning the game, or do I stand: delaying the game and running out the clock and insuring the win for my team as the crowd and the opposing bench cursed and booed my actions.

Intensity rose, I alone could secure the win by standing or roll the dice: sit and allow Bricktator to take the track again.  I do not like the idea of winning a game by such rules manipulation, and I wanted nothing more than to take a seat and serve the penalty that I had earned by my error. I turned to my bench, not willing to make this decision alone, I received a single word from my Captain and continued to stand. The Wrecking Belles won the Championship game by a 3 point margin.

This was the most intense moment of game play because it has been the only moment where I felt the entire weight of the outcome resting on my shoulders instead of it being spread through out the working of my team together on the track.

6) When you have a team of skaters rushing at you to take you down, what keeps you going?
We are the team of skaters rushing to take down the opposition.  This question seems to imply a feeling of being the potential victim or prey of another team.  No, no, no, that is not the case.  Even when you are a target, you are empowered by the fact that everyone is drawn to where you are. That magnetism can be turned to manipulate the opposition to your wanting. It's the thrill of the game -- the thrill of the defensive struggle -- that is so engaging with this sport.