Jan Mignone: What Richmond Trees Means to Me 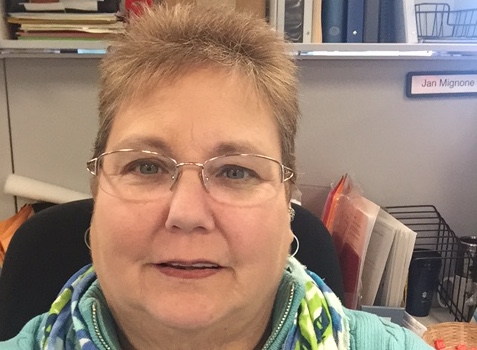 The Past
My family moved to Richmond in the late 40’s from Oakland.  They moved a second time, in the mid 50’s, to the house I always knew as home and returned to when my parents needed me. We never had any trees in our yard and Wendell Park (our closest park) didn’t either. I enjoyed trees for reading under and for climbing. I usually went to other parks to enjoy the trees. While our garden and the local parks lacked trees, I remember a lot of street trees. Many were flowering plum trees, not good for climbing but good for shade, just what I was looking for. There were magnolias, oaks, eucalyptuses, even some redwoods. The trees started to disappear as I grew older, mostly because they dropped leaves or flowers and made a mess and people were too busy to clean up after them and wanted them removed for the “inconvenience,” not because their life was over. The first time I watched the death of a tree was when the holly tree that was in our neighbor’s front yard and right next to our driveway, was cut down. “It was getting too big and its roots were working their way into the sewer pipes,” our neighbor said.

As a kid you take things for granted and climate change wasn’t even on my radar. Not until many years later when it was getting hotter each year did I begin to notice the lack of trees in Richmond. I had spent time in different cities and some were much greener than others. I always knew I’d end up back in Richmond again, and when I returned I had an urge to do something for my city. Some streets had trees on every block and others had only one or two trees. Much of the tree area on streets had been cemented over because people were too busy to do yard work. It was sad to see a once lush area look so much like a concrete jungle.

Getting Involved with Richmond Trees
Before returning to Richmond, I had been the President of my HOA and found that I really enjoyed knowing and working with the staff and my neighbors. Now, back in Richmond, I was looking to volunteer again. I joined the North and East Neighborhood Council and, over time, became the President. As President, I wanted to show my support for what every group in the neighborhood was doing. I supported Solano Play and have run their “cafe” at their events for many years. I also heard about a group of neighbors that were trying to grow the urban forest, using the City of Richmond’s Adopt-a-Tree program. I went to the first couple of meetings and I was hooked.

This was something I could do, meet my neighbors and really help change the City of Richmond. I may not be the one who plants your tree, but I am the one who makes sure the volunteers have a bite to eat, a warm cup of coffee, and water when they are thirsty.

I meet so many people from all over Richmond and other cities as well who believe in growing the urban forest wherever they can.

I’ve been with Richmond Trees since the beginning and am amazed at all the trees we have planted, all the children we have taught about trees and how beneficial trees are for us. The self-esteem a child has when they tell others “I planted that tree” is one of the greatest accomplishments Richmond Trees can have (other than seeing the urban forest grow to 50% in Richmond, which is our vision!).

Richmond Trees’ 2015-2016 Planting Season
We began our planting season on October 24, 2015, at Richmond’s Make a Difference Day at JFK Park, by planting trees and showing others how to plant a tree and grow the urban forest. At JFK Park, we worked with many other groups in Richmond that are helping to grow the urban forest like Groundwork Richmond, The Watershed Project, Pogo Park and the Earth Team from Richmond High School. We then planted in December as well as in January, and our next planting will be on February 7, 2016, when we will be planting another 19 trees on the streets of Richmond.

On February 7 we will meet at 919 33rd Street, with volunteers arriving around 8:30 am, and at 9:00 am we will break up into groups with our planting captains and go to the area where we will plant trees. We are planting again in the beginning of March and may try to get another planting day in the end of March. We really want to take advantage of the rain and get as many trees in the ground this planting season. We hope to have at least 100 trees planted by the end of the season, bringing our total to 500 since 2011. Our work also includes caring for the trees during their first three years, and we do this by having monthly Tree Care Walks. They are on the third Sunday of every month all year.

I am very proud to be a part of Richmond Trees, partially because it was started in my neighborhood but more because this is an all volunteer group that works tirelessly to get trees in the ground and fundraising to make Richmond Trees grow as well. This is an organization that is really doing something to change global warming and it also makes Richmond a healthier place to live and work.

If you want to get in some exercise before sitting in front of the TV to watch Super Bowl 50, join us at 919 33rd Street on Sunday, February 7, 2016 at 8:30am to plant a few trees and change the look and feel of Richmond. Or join us for a future planting and/or for Tree Care. We always love seeing new faces. Just contact us at info@richmondtrees.org.