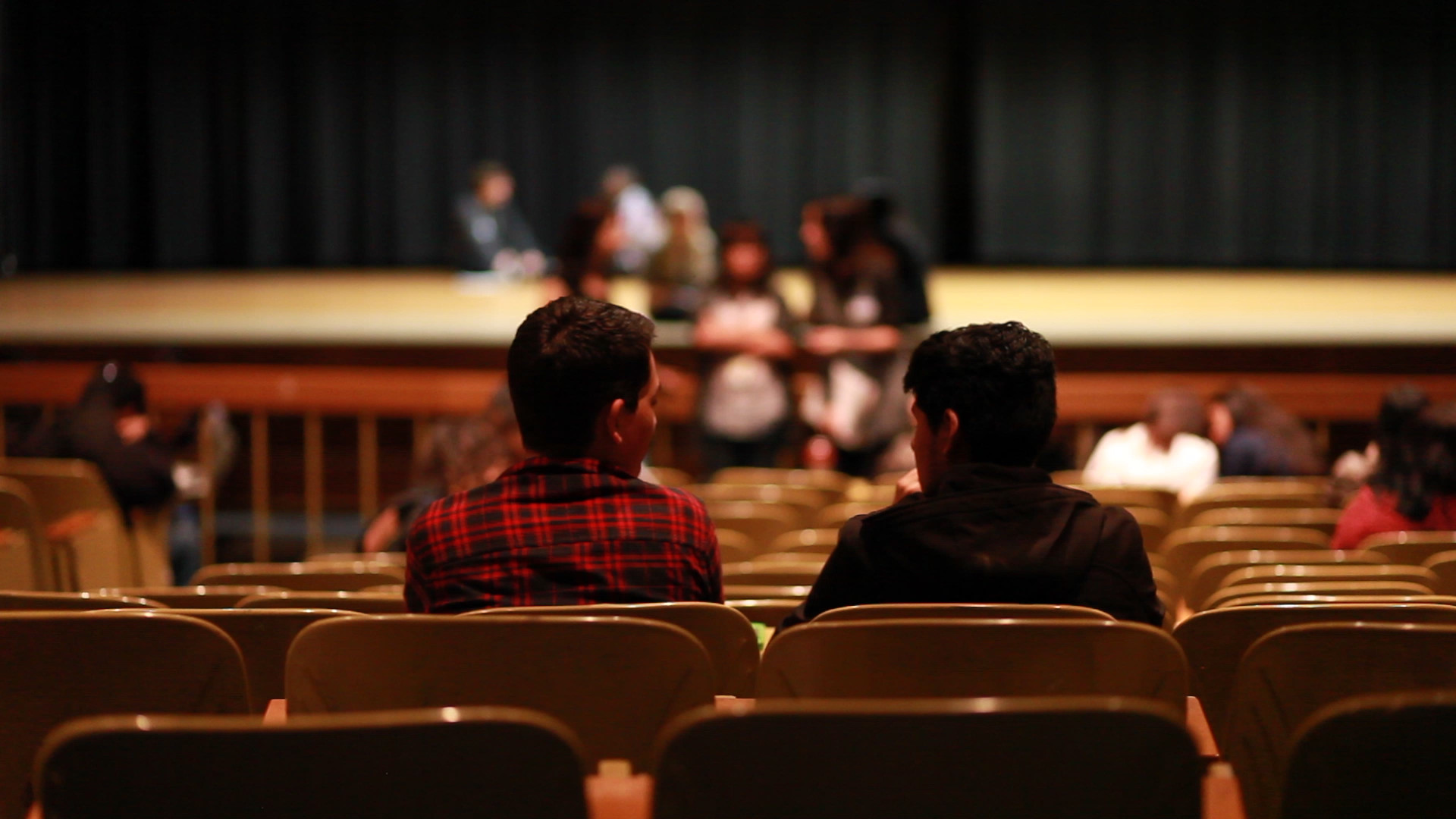 The worlds of Richmond High School and Marin Academy are only one bridge away from each other, but they rarely collide.  Until a theater project asked students from both schools to interview each other, and perform each other’s lives on stage.

Before going to Richmond High School for the first time, Marin Academy students weren’t sure what to expect.

“There’s a lot of talk here in Marin, kind of like, ‘Oh, the East Bay’, and that it’s a scary place. So I definitely had some of those seeds planted,” said Maddie Eisler.

Will Bewley had only been to Richmond to pick up industrial parts with his father, or car parts at the Pick-n-Pull.

Richmond High students had their own worries about  visiting Marin.

“I was kind of afraid of going there because I thought everyone would be judging me, not only me, but us,” said Brandon Martinez. “Like, they were going to be, like, ‘Oh these are Richmond High school kids, public school kids, poor kids, they don’t know anything,’ you know?”

All that changed when the students did documentary theater. Which means interviewing someone and then basically becoming them on stage. You have to learn to move the way that person moves, and follow the exact words that person said, even the ums, the ahs, the likes.

So each student met with a student from the other school, and they basically ripped their hearts out, knowing full well that these interviews would end up on stage for everyone to see, performed by the student that interviewed them.

“When I went there, I expected really small, rich-people problems, like, ‘Oh, I can’t afford this car,” said Richmond High senior Tiyana Sugimoto. “But after transcribing the interviews, and reading what the other students wrote, I found that a lot of people have issues that you can’t see. One girl, she has ulcers in her colon. …It’s a lot. It gets really deep.”

In one scene, a student from Marin Academy speaks the words of a girl from Richmond High.

“I’ve seen many guns in my life. I’ve had guns pointed to me before… My brother, he had his best friend die in his arms in front of my sister’s house.”

When you have to walk in another teenager’s shoes, and speak their truths, you come to understand them in a different way.

“So many of the kids from Richmond have, obviously, lives so much deeper beyond the fact that their parents don’t make as much money as our parents,” said Kai Barshack from Marin Academy.

“So many of them are passionate about writing or social justice. I interviewed someone who is just, like, super interested in, like, biology and psychology. The idea of portraying one of those people, really getting inside of them… our theater teacher was saying, ‘It’s a lot of pressure, like baring someone’s soul on stage.'”

In the play, Barshack portrays Richmond High senior Reggie Edmonds, while Edmonds portrays Barshack. He runs his hands through his hair and muses about privilege:

“I like living in the U.S. and part of the top 1 percent,” he says. “I like living in Marin, but we talk so much about privilege here, it makes me sick. Like, acknowledge your privilege. …Like, yeah. Stop shoving guilt down our throats!”

The play, “Bridging the Bridge,” is the brainchild of Marin Academy theater teacher Annie Elias and Richmond theater and English teacher Eugenia Ives.

Elias has experience in documentary theater, which has been made popular by performing artist Anna Deveare Smith.

“Sometimes, my students would use the word ghetto, or other phrases, and I just felt like, ‘You know, I don’t think they really know what that means,'” said Elias.

Ives lives in Marin but drives every day across the bridge to teach at Richmond High School.

“Something I am so aware of since working in this school, how segregated the Bay Area is. It’s shocking to me, actually, to come over the bridge and work in this school every day and to come home, and almost everybody’s white where I live,” said Ives.

To create the play, students had to break through that segregation. Which meant examining some big differences, even when those differences were uncomfortable. At one point in the play, Marin Academy student Georgia Spears speaks the words of a Richmond High senior talking about receiving her college admissions letter.

“It said ‘Congratulations, you’ve been accepted to…’, and I was like, ‘Whoa!’ I was like, ‘Mom!’ Because I’m the first person in my family to go to college, so it’s a pretty big deal.”

“Cornell University, Yale, or Harvard, or any of those. I never thought twice if I got into them, how I would pay for them. Well, yeah, my parents are going to pay for it!”

The play is intertwined with footage of the kids’ visits to each other’s schools. Their concerns beforehand. Their joy at getting to know each other. The audience is left with a play full of honesty and vulnerability. Of people making themselves vulnerable in order to understand each other.

Overwhelmingly, students from both schools came away with the feeling that they had a lot in common.

“Teenagers, we all pretty much want the same thing, we want freedom, we all want to be liberated, we all want to go out and see the world,” said Richmond student Jamey Williams.

Deshawn Boyd from Richmond bonded with his Marin Academy partner.

“He was on the swim team also. We both like the 49ers and the Warriors. We just had a great connection. I still talk to him every so often, like once or twice a week,” said Boyd.

Some of the other students are also keeping in touch by text message, Instagram or Facebook. Will Bewley says he might even end up at the same college as his Richmond partner, Brandon Martinez.

“Statistics on crime and literacy and how well people can do math don’t reflect anything about how nice the people are and what kind of problems they face and how similar they are to you,” said Bewley.

Martinez agreed: ” I don’t think having money should separate somebody. That’s what I learned. You can be friends with anybody, even if they’re rich or poor, not judging someone just by their income.”

It’s going to take a lot of work, though, to stay in touch across the divide. Many of these kids will probably still have very different lives after high school.

Their stereotypes of each other were challenged, though. On opening night, Richmond senior Tiyana Sugimoto told adults in the audience they too should challenge their assumptions.

“If high schoolers can put themselves in each other’s shoes and understand each other’s problems, then adults should be able to do it, too,” she said.

The crowd erupted in applause.