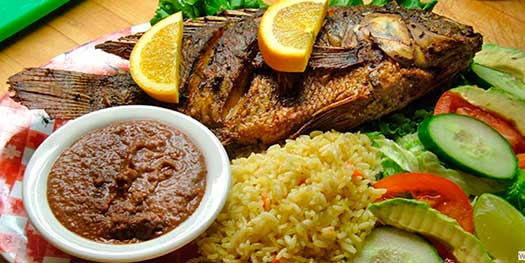 Fried whole tilapias, fresh empanadas, and fluffy hand tossed pupusas: Salvadorian restaurant La Cascadita has one of the most authentic and diverse menus in town.

The restaurant at first appears like many others.  The faux flower topped linoleum tables, Spanish radio on over the speakers, and clanging kitchen could have been in any other restaurant on San Pablo Avenue. But it’s what ends up on your plate that makes the restaurant stand out.

The restaurant serves big soups with seven kinds of seafood, heaping plates of pupusas, and enormous breakfast dishes, but one of the most popular and unique items is the Mojarra Frita, or fried tilapia. Unlike most fried fish dishes, this one is not made of nicely sliced and fried hunks of fish. No, La Cascadita prefers to give you the whole fish — gills, fins, and all.

It was, admittedly, a little intimidating at first. Was the fish staring at me? How do I cut this thing open? What if I swallow a bone? After a little self-help pep talk, I dove in.

Surprisingly, the meat fell off the bone with ease. Though the exterior was crispy and fried, the tilapia’s meat remained tender and juicy. The bones, though, did pose a bit of a challenge. The occasional one — thin, sharp, almost transparent — would get tangled in the fray of meat. Patience and a careful approach are advised for this meal.

The tilapia itself makes for a hearty feast once separated from the bones. Stacked on the pupusas with refried black beans, fluffy yellow rice and lettuce, it becomes a meal to be reckoned with. It’s too much food to eat in one sitting, but it isn’t the easiest thing to take home, either. The best compromise is to eat as much of the Mojarra Frita as you can before your brain catches up with your stomach.

The Mojarra Frita is a the star of the restaurant’s lunch menu, but the restaurant is best known for its breakfasts. The menu is full of huge, delicious specials, like the number ten, which comes with two fried eggs, fried plantains, refried beans, fresh cheese, and sour cream. The meals are hearty and flavorful, drawing on many elements of Salvadorian cuisine.

I learned that La Cascadita has been open for five years now, but a language barrier between myself and my waitress inhibited a longer conversation about the restaurant’s origins. The place feels homey though. It’s the kind of place where one would get to know the owner if they hung around long enough.

The restaurant is one of those hidden gems tucked away in an inconspicuous strip mall, but it’s worth the trip.