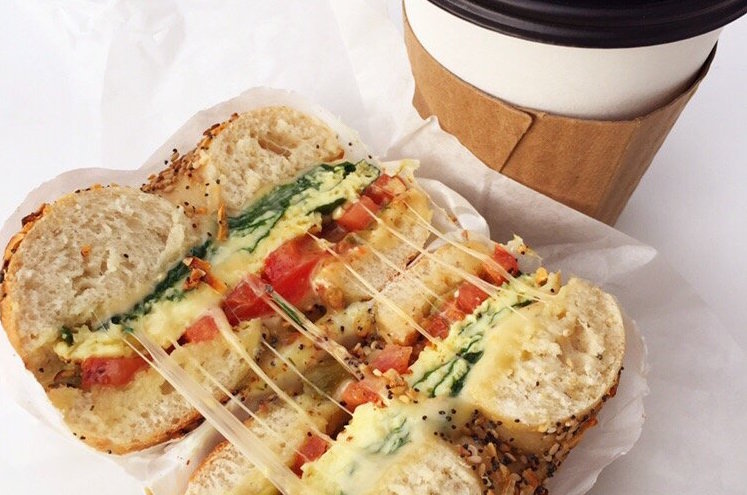 If Catahoula Coffee had an El Cerrito equivalent, it would be Well Grounded. The coffee and sandwich shop is known for is diverse array of tasty bagels and big sandwiches, in addition to a uniquely flavorful coffee brew. Well Grounded has a strong menu, but falls short when it comes to basic amenities.

To start, Well Grounded is very tiny. The El Cerrito cafe is basically just two small rooms bridged by a small set of steps. The main area, where patrons order, is about six feet by four feet, and it becomes easily cramped if there are more than five people in the space. The second room, just a few steps up from the first space, is nearly the same size with three small tables scattered about.

Well Grounded could easily be the perfect spot to do some work or read a book, but its lack of space makes this a challenge. During a recent weekday, the tiny space was packed despite it being the middle of the afternoon, which is often the easiest time to grab a space at a coffee shop to work. There weren’t actually that many people in the sitting space, it’s just that the cafe is so small that it can’t accommodate more than half a dozen people at a time.

Further, the cafe doesn’t have a restroom on site. The patron that needs to go will have to head over to the boutique next door to use their bathroom, if they’re open.

However, the cozy space didn’t appear to be much of an issue to the patrons who packed into the space.

“We’re a community hub, and a lot of the people who come here know each other and don’t mind sharing a table or sitting close to each other,” said Eddie Valladao, who has worked at the cafe for about a year. “The owner is actually looking into another space, but nothing is official yet.”

In the meantime, it might be best to take their bagels and sandwiches to go. Navigating the space is a bit of a pain, but their food makes it worth the minor hassle. Well Grounded is stocked with tons of bagels from Berkeley’s Boogie Woogie, and everything is available gluten-free, for the celiac consumer.

One of their most popular (and delicious) sandwiches is their New York bagel. It’s simple, with just a spear of cream cheese on a bagel (choose between onion, the works, sesame, etc) that’s packed with a generous amount of lox, capers, red onion, and tomato, but it hits the spot.

Their coffee, too, is a delightful surprise. According to Valladao, all of their coffee is pressure brewed, which results in a creamier taste.

“People often think we’re giving them a latte instead of their coffee, but it’s just the flavor that comes from the oils in the beans,” he explained. “It’s really unique.”

Balladao is right — there is something special about their coffee. It’s a little nutty and smooth in flavor, and it pairs well with their bagels.

Well Grounded excels in making big, tasty sandwiches — and their coffee is pretty good, too — but there is much to be desired in terms of breathing space and basic amenities. It’s worth a visit, but maybe not a stay.

Update: This story originally spelled Eddie Valladao's last name as "Balladao." Thanks to Jen Komaromi for the correction.