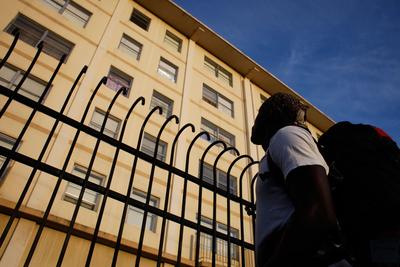 At last night's special meeting of the Richmond Housing Authority (RHA) and the Richmond City Council, it came out that while steps have been taking to fix problems at the most troubled building in the department, there is still vast room for improvement across different parts of the organization.

Conversation focused on the troubled Hacienda complex. The dilapidated condition of the building was the focus of a series of articles nearly seven months ago, which lead RHA Executive Director Tim Jones to declare the building uninhabitable. Since then, the spot light has been on the RHA to fix this building and save its residents. However, a lack of consistent or reliable information has left the public -- and the residents of Hacienda's 150 units -- feeling forgotten by the RHA.

Last night, Tim Jones tried to rebut these feelings with the comments that have become staples of such meetings. As things stand, the application to receive funds to renovate or demolish the Hacienda building is in the hands of the United States Department of Housing and Urban Development (HUD). "We are moving as fast as we can," explained Jones. But there was no answer as to when people are going to actually move out of the uninhabitable building.

When the RHA and City Council met last week, City Manger Bill Lindsay estimated that HUD could approve the application in early October, but mentioned that there was no way to be sure of this. From the date of approval, a 90-day process will begin where residents of the uninhabitable building will be moved out and given Section 8 vouchers. As the application process stands right now, tenants could be moved out of the Hacienda building by early January 2015 at the soonest, nearly 11 months after the crisis initially broke headlines. Throughout last night's meeting Jones looked exasperated at having to explain "old" information before the Council, but it became apparent through questions from the public and the council that there is much more to the RHA crisis than just the Hacienda building.

During public comment Yolanda Pearl, an RHA tenant, asked Jones and the council when her mold-infested housing unit would be renovated and ready for her and her children to move into again. What threw off Jones and City Council wasn't that her unit was mold-infested (that too has become a regular staple of these meetings), but that her unit isn't in Hacienda -- it's in the Nystrom Village development.

Since May of this year, Pearl described, she has been moved from one place to another, often with less than 24 hours notice. She has had to pack up her kids and their belongings to move into one-room hotel units where they would remain for an undetermined amount of time. Pearl was recently told that she could stay in her current hotel room until September 30th, but she wasn't given information on what was going to happen to her family after that date. Pearl emailed Jones on a number of occasions and received no response, so she went to last night's City Council meeting to demand a answers.

After Pearl's speech, in which she pleaded with Jones to simply acknowledge her and her problems, looks of awe were exchanged among the council members. In the midst of the outrage over Hacienda, problems at Nystrom slipped through the cracks and their tenants were forgotten. Jones wasn't advocating for them, either, so their problems fell to the wayside.

As the issue of the unapproved HUD application was forgotten and discussion shifted to the vast information gap on other problems in the RHA, the depths of the organization's dysfunction grew more apparent. For several months, none of the buildings had designated building managers. Housing Commissioner Jackie Thompson mentioned that she hasn't received any reports on Nystrom Village. Reports of misspent money remain unresolved. Eventually, as frustrations became exhausted and few answers were received, a motion was presented to move on with the meeting. It was passed unanimously.

The special joint meeting of the Richmond Housing Authority and the Richmond City Council brought to light that while steps have been made in the right direction to resolve one problem, the RHA has many more miles to go until all of its tenants are living in clean, secure, and stable housing. Just how long it will take to get there remains unknown.