As Bay Area governments have slashed their work forces in recent years, overtime pay has exploded, with nearly 1,500 public employees adding at least $50,000 in OT to their gross pay last year.

The jaw-dropping trend is especially strong among firefighters and police, many of whom are doubling their base pay to cover empty shifts, this newspaper found in a new analysis of 2013 compensation data.

While it's often cheaper to pay overtime instead of hiring more workers, the runaway OT costs are so alarming in some cases that local officials are now admitting that a short-term management tool has become a costly crutch. The workloads also are raising concerns of fatigue that can endanger public safety employees and the public they serve.

The OT surge is revealed in a Bay Area News Group survey of compensation data from 355 Bay Area public agencies that is by far the most detailed such database in the state. It found:

Those figures floored Vallejo City Manager Daniel Keen, who acknowledged he had no idea Cpl. Stanley Eng put in so much overtime until the newspaper informed him.

"Wow," Keen said. "I'm worried about anybody who works that much."

The individual cases add up: This newspaper's analysis shows the share of OT in public payrolls across the region has jumped 26 percent over the last three years.

And more workers are seeing extra bucks in their paychecks from the extra hours: The number of public workers in the region who were paid more than $50,000 for overtime in 2013 is up 13 percent since 2011, according to the newspaper's survey.

BART senior foreman Nucion Avent said there's no reason for workers to apologize for trying to get ahead.

"Look, the overtime is there, it's available. People take it because we provide a service to the public that people need to get around. That's the way it is."

Overtime as a portion of gross pay jumped 70 percent from 2011-2013 in Brisbane, 50 percent in San Jose and 32 percent at the East Bay Municipal Utilities District, the only agency among those with the 10 highest increases that does not employ law-enforcement officers or firefighters.

"Since 2011 we had a hiring freeze and an uptick in retirements, so we have used overtime as a way to bridge that gap," said a district spokeswoman, Abby Figueroa. "Since the hiring freeze ended, recruitment hasn't caught up yet."

Most of the overtime, she said, is because of a 20 percent spike in water and sewer main breaks last year that occurred partly because maintenance was slashed during the recession.

"Pipes break at all hours of the day and night," she said.

Brisbane's overtime soared because of a decision to cut police and fire staffing through attrition, City Manager Clay Holstine wrote in an email. The small San Mateo County city's overall payroll fell by roughly $600,000 during the past three years while overtime grew by $221,000 over the same period.

"We are concerned about potential burnout," Holstine wrote, and the city is planning to add four cops over the next two years.

In San Jose, overtime has become a calculated -- if not controversial -- trade-off, as the city cut its workforce and employee benefits to balance the books. The loss of 2,000 employees over the past decade has made overtime climb, said Deputy City Manager Alex Gurza. "Demand for services doesn't go down, so overtime is a way to provide that."

An exodus of police officers, in part blamed on Mayor Chuck Reed's pension reforms, has forced the city to increase overtime by $8 million each of the last two years, as well as another $525,000 in the overtime budget to beef up downtown patrols.

The department announced last week it was going to a mandatory overtime program to make up for patrol shortfalls, requiring officers to stay on duty if they are needed when their normal shifts end. Oakland has enforced mandatory police overtime for the past 18 months. 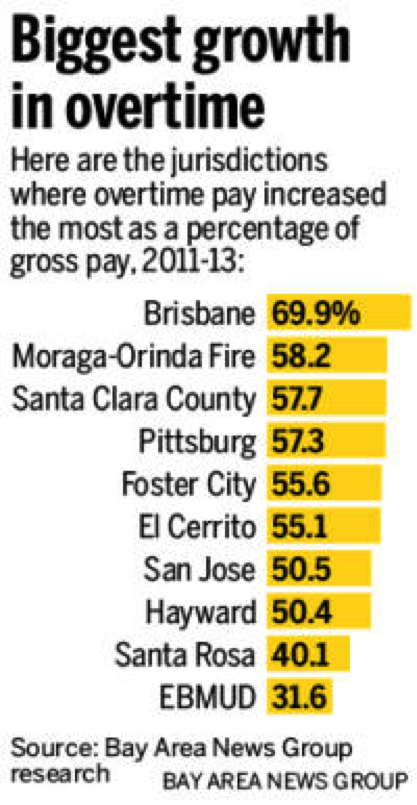 San Jose spent $21 million on police OT last year, with officers who worked it averaging a little more than $17,000 each, data show. Oakland spent $30 million with an average take per cop of $29,910.

Santa Clara County's overtime spiked to more than $60 million last year -- tops in this newspaper's survey, by far -- in part because staff at its Valley Medical Center had to be trained on an electronic medical records system that took nurses away from bedsides and created open shifts, County Executive Jeff Smith said. The county is about to hire 300 people, about half of them hospital workers, to cut down OT costs, he said.

For cops and firefighters, overtime even in the best of times is an inevitable part of government employment, fueled by the necessity of 24-hour staffing and unexpected events, said fire and police managers. Police can find themselves in the midst of investigations when shifts end and are forced to remain on the clock.

Firefighters typically work 56-hour weeks in California, with OT built into their routine work schedules, which can also include downtime between emergency calls for meals and sleep.

No government worker in the region topped Richmond Fire Capt. Angel Bobo, 59, who received more than $279,000 in overtime pay last year to boost his gross take for the year to $426,000.

His 2013 overtime alone exceeded the sticker price on a 2014 Lamborghini Gallardo Spyder convertible.

Bobo was among 24 Richmond fire captains who combined to receive $2.2 million in overtime in 2013 -- enough to pay the salary and benefits of 17 firefighters last year, Richmond's data shows.

"It's too high, without a doubt," she said. "This is something that Richmond needs to get a handle on." Overtime among captains, she added, seems to be a systemic problem.

Richmond's leaders made a conscious decision not to close any of the city's seven fire stations during the recession, said its city manager, Bill Lindsay, so as staffers resigned or retired, overtime went up.

The state doesn't cap the amount of overtime an individual can work, said Chris McKenzie, executive director of the California League of Cities, and the league has no recommended limits. "Certainly there are life and safety concerns," he said.

There's also no specific industry standard for safe levels of firefighter overtime, said Tracy Hansen, president of the California Association of Fire Chiefs. "It's a department-by-department decision based on the need."

Richmond salary data from 2010 through 2012 shows the overtime for fire captains hovering between $1 million and $1.25 million for those years before spiking to $2.2 million last year. The department had 26 captains last year, up from 20 in 2012, data shows.

When asked about the rise in OT in his department, Richmond Fire Chief Michael Banks said that he believed that "overtime has diminished" recently. But data shows that overall overtime has increased steadily over the past four years, from $2.6 million in 2010 to $4.3 million last year.

For Bobo, especially, overtime has served as a way to boost paychecks that would have otherwise remained flat. His base pay for the past five years has remained around $113,000. But during that time he's added another $564,000 to his paychecks through overtime. Each of those years, his overtime exceeded his base pay by an average of 60 percent, data show.

"That's too much for any individual," Lindsay said. ''We have to minimize the need for that much overtime. I don't think it is good for employee performance."

Bobo "is one of those guys who's made a decision to work every shift he could get," Banks said. "He's there when he is needed."

Bobo did not return phone calls or a message left with Banks. Noah Brownlow, business agent for the Richmond firefighters union, called Bobo "a very respected guy" and declined to comment specifically on his overtime.

"Overtime is a necessary evil, but overtime like (Bobo's) on a consistent basis is a sign of bad human resource management and human resources allocation," said Jon Coupal, president of the Howard Jarvis Taxpayers Association.

"When you have managers who don't know how much overtime was worked, it's obvious that they aren't watching or don't care. There are human limits. You can't forget about those."

On top of his regular shifts, Eng worked an average of 46 hours a week in overtime, police records show.

The city paid Eng for working 57 hours of overtime in a single 72-hour period on Sept. 27-29, records show.

Keen, the city manager, referred questions about Eng's work schedule to police Chief Joseph Kreins, who didn't return calls. Eng did not return repeated phone calls to the police department and his home. The president of the city's police union, Matt Mustard, did not return calls.

Overtime in the department has been high as the city of 116,000 people has struggled through the bankruptcy it filed in 2008 and emerged from in 2012.

"It's no secret we've had a lot of overtime because of low staffing levels," Keen said. "It's an issue the Police Department is working to reduce."

Vallejo officials should be asking questions about Eng's "effectiveness as a police officer," said Dennis Kenney, a professor at the John Jay College of Criminal Justice in New York, who has studied fatigue in cops.

"His fatigue has to be enormous," Kenney said. "Policing is about communicating with people. If you're constantly fatigued, your ability to make decisions is compromised. If you are irritable, you aren't going to be able to get people to do what you need them to do."

That can lead to accidents or bad decisions about using force, Kenney said. "Police are out on patrol to see things. If you're fatigued you're less likely to pay attention, or you might fall asleep at the wheel, or get in a car wreck and get your city sued."

Tony Ferrara, a retired Los Angeles County sheriff's deputy, agreed. From moment to moment on a long shift, "adrenaline kicks in" and a tired officer can function, said Ferrara, incoming president of the California League of Cities and a mayor in San Luis Obispo County. The real damage comes when an officer works massive overtime month after month.

When Ferrara was assigned to patrol South Central Los Angeles, he said he "worked 24 hours straight sometimes" and looked forward to days he had to testify in court instead of being on his beat. "Then I could take a nap on the bench in the hall."

Staff writers Eric Kurhi and Mike Rosenberg contributed to this story. Contact Thomas Peele at tpeele@bayareanewsgroup.com and follow him twitter.com/thomas_peele