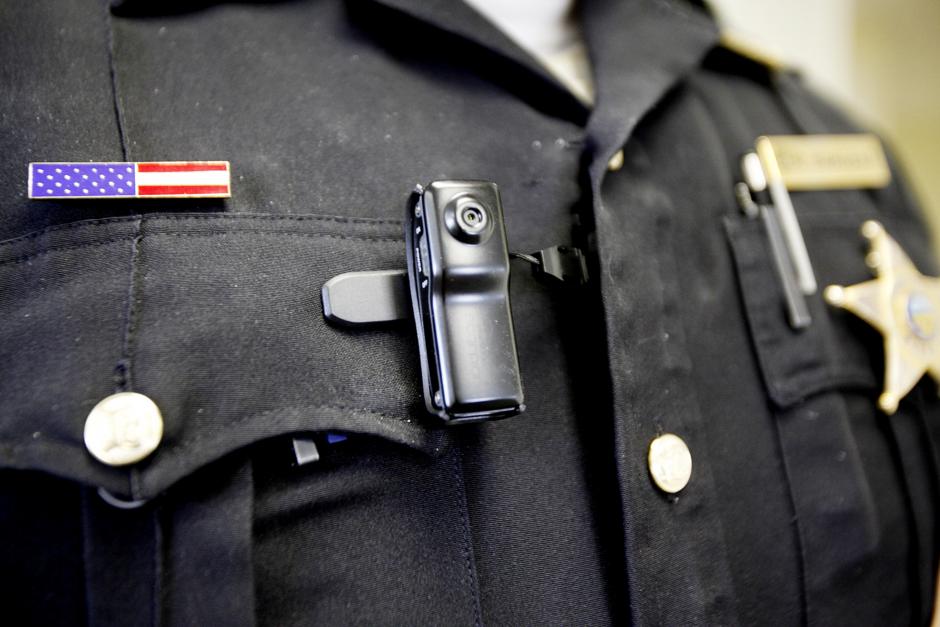 This is part one of Radio Free Richmond's podcast on body cameras in the Richmond Police Department. You can listen to the audio here and read the transcript below.

TRANSCRIPT:
This is a Radio Free Richmond podcast. You’re listening to part one of a three part series about the Richmond Police Department’s new body cameras. To start, here are the cameras themselves.

Opening: [Sounds of tinkering with camera]

Officer Jennifer Cortez: You can pop the back off and see how big the battery is on this one. So there’s the on and off switch right there, and then that’s also the charging port.

Sean: Looks like a micro USB port. Then here on the top this is where you record.

Cortez: Yeah, on the sides.

Sean: And on the bottom here’s the switch for the audio.

Sergeant Abetkov: So there’s several different pieces the officers were given. They’ve got charging cords, they’ve got USB cords

Sean: Here Richmond Police Sergeant Nicole Abetkov and Officer Jennifer Cortez are talking me through the new police body cameras in January of this year. For all the clicking and clunking sounds the camera makes, they’re surprisingly small — just a one-inch by one-inch black cube that officers clip on to their uniforms.

At the time of recording, in mid March of 2015, the cameras are still relatively new to the police force. The best way to use the technology and its longterm effects are still being worked out.

But the expectations are great — both from the public and from the RPD. Many in the public see the police body cameras as the way to hold officers accountable for unwarranted use of force.

But the RPD see the cameras as a tool — both to gather evidence, and to fight false accusations of police violence from the public. In a way, both the public and the police are looking for the same thing from these cameras — accountability for the other’s actions.

Let’s take a step back. What are these cameras? Where did they come from? How are they being used by the Richmond Police Department? And what is their ultimate purpose? Depending on who you talk to, the answers to these questions can vary greatly. The disconnect conjures debates about police accountability, privacy, and trust between the public and the officers that serve them.

In part one, we’re going to look at the cameras themselves. What are they, exactly? How are they used? And where did they come from? Let’s begin.

Abetkov: So the one thing about these is, if it’s not plugged into this battery pack, it’s not going work. It’s not going to record obviously because it needs power to it. But even still, the way that the camera works is, obviously, they’re going through a couple little glitches on it, but they’re trying to figure out the battery life on it to last longer because they were running it on a continuous loop…[fades out]

Cortez: The batteries as of now, they’re not lasting full shifts, especially if you’re actually using it.

Sean: The camera is called a FirstVu from the brand Digital Ally. In terms of specs, the camera seems pretty standard. The whole package, including the battery pack and camera, weights just over four ounces. It has an extendable cable, a waterproof design, and, as the RPD knows well, an “Advance Exchange Warranty” to swap out broken models. The cameras are new, and the RPD is still getting the hang of them.

Abetkov: In all reality, it was only deployed, what, maybe three weeks ago? Obviously any time you deploy something new there are going to be glitches in it.

Sean:The main glitch with these cameras is their battery life — only an hour or two max of continuous recording. FirstVu’s website claims the camera can record up to four and a half hours without interruption, but the day-to-day experience with the cameras hasn’t been up to par. When an officer is out on patrol for more than five hours at a time, that makes it a pretty big glitch.

Sean: So, what are you supposed to do?

Abetkov: You just have to do the best that you can with it. I mean, it’s one of those things that everyone pretty much carries duty bags, or they carry bags with equipment. I guess they could have another battery charged up and put into their bag, but, like I said, we’re still trying to figure out what the best way is to utilize them. Battery life, all that stuff.

Cortez: We’ll figure it out.

Sean: Getting the cameras up and running has been a year and a half in the making. Richmond’s Deputy Police Chief, Allwyn Brown, helped spearhead the endeavor. While he sees the limitations of the technology, his primary concern is using them to gather evidence and create transparency.

Deputy Police Chief Allwyn Brown: Like many other tools that are being used by law enforcement officers from across the country, first and foremost we look at what’s the value added. Does it enable us to be more effective in the service we that we provide to the public? Does it make our officers safer? Does it make them more efficient? Is it cost effective?

Sean: How did you come across the first view cameras as the cameras that you chose.

Brown: Well across the board HD video technology isn’t that much different from vendor to vendor, but we liked the design, the wear ability, and the DVR is separate from the part that does the recording, so that in the case that an officer were involved in any sort of a physical altercation, car crash, or, you know going over a fence, and the camera were to be dislodged, there is a higher probability that at least the video footage up to the point that camera gets lost is retained and not lost because it’s carried in a different location on the officers uniforms.

Sean: Okay, that makes sense. Now, I’ve heard that the cameras battery has not has good as some officers were hoping or expecting. I’m wondering if you can discuss the battery life of these cameras a little bit.

Brown: Yeah, sure. With any new technology that is different and foreign, there is going to be an adjustment curve. We did notice, initially, during the trial period after we accepted delivery of the cameras that there were some battery issues in terms of the battery life was not as long as officers were expected that it would be. But part of that was the first charging of the batteries getting the proper memory.

Body worn cameras really have become considered a very important tool for the future of policing, partially because what they provide is an audio/video record of police officer activity and police officer interactions in the community. That’s something that really enhances transparency and accountability and that allows us to build on and improve the public trust.

But just how transparent do the cameras make things? And who is holding whom accountable? And what are the rules regulating the use of these cameras? That brings us to Part 2 — Use of the cameras: Policy versus practice.

You can listen to the rest of the podcast here, or wait until next week.