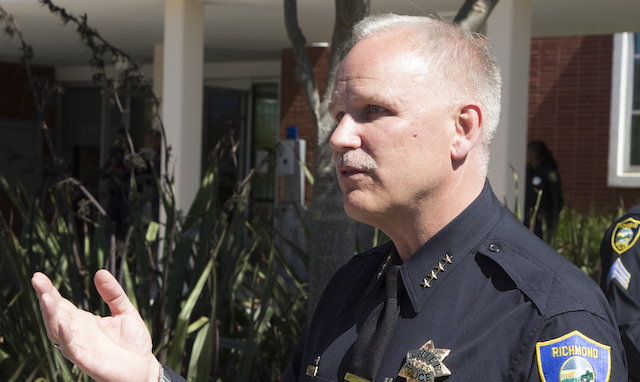 Richmond is now nationally celebrated for its community policing tactics —but it wasn’t always this way. In the nearly 10 years since Richmond Police Chief Chris Magnus took the job as the city’s lead cop, the homicide rate plummeted and relations between the community and the police department significantly improved.

Now, as one of four final applicants under consideration for police chief in Tucson, Arizona, Richmond’s most celebrated officer might be on his way to a new chapter in his career.

“I really love Richmond and to even contemplate leaving here…was extremely difficult,” Magnus said. But, he conceded “…sometimes it's time for a new set of challenges. Tucson seems like an interesting, progressive, city with its own set of complex issues.”

Tucson, with a population nearly five times that of Richmond, would provide Magnus a larger staff, more resources, and an opportunity to move ahead in his career.

“I like to challenge myself, continue to grow, and gain new knowledge [and] experience as a police administrator, and do my best to influence the policing field,” said Magnus.

Magnus has been hailed for the work he’s done to spur improved relations between the community and police in Richmond. He was even brought to Ferguson, Missouri to advise their police department on how to work with the community after the outrage sparked by the officer-involved death of the unarmed teenager Michael Brown.

Though Magnus has been celebrated nationally, at home the police chief has faced criticism recently for how his department is handling the aftermath of an officer-involved shooting that left an unarmed Richard “Pedie” Perez dead in September 2014. This was the first officer-involved fatal shooting in Richmond in seven years.

“[Chief Magnus] is moving on to greener pastures while the getting’s good,” said Rick Perez, the victim’s father, recently. “He doesn’t want to deal with this serious blemish that’s on the city.”

The Richmond Police Chief thinks that he has a lot to offer Tucson, but knows that he would still be happy in Richmond if not offered the new position. “I think I could be an asset to them and enjoy the experience if they decide I am the ‘right fit,’” Magnus said. “If I'm not—I'm okay with that too, because I am entirely fine staying in Richmond.”

Magnus and the three other candidates —Larry Esquivel of San Jose, California, Malik Aziz of Dallas, Texas, and Rick Gregory of Tallahassee, Florida —will all interview with the Tucson Police Chief Appointment Advisory Committee in a public meeting on October 29.

It may be a while until the Committee makes a decision about their new police chief, so, for now, Chief Magnus is sticking around.