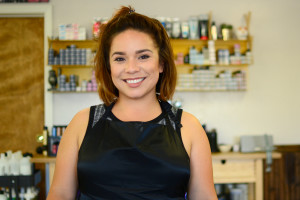 “It’s very rewarding to open a business in the city I grew up in. I am [trying] to bring something positive to the city. Hopefully as I as expand, I can bring prosperity and betterment to the city,” Gonzalez said.

Ritzy Reuben offers hair and beauty services, specializing in haircuts, extensions, and hair coloring. For Gonzalez, it is important for people to feel good about themselves.

“Our services are something that brings more than just a hair style or color or tint; we’re touching people personally, helping them feel better. People always want to feel the better part of themselves,” she said.

Women like Gonzalez continue to outnumber men when it comes to starting new businesses across the nation, with women of color leading the way.

Bret Sweet is the program manager of the Renaissance Entrepreneur Center in Richmond, a small non-profit that provides support services and training for business owners. Sweet says his office is seeing many women in Richmond, as well as women throughout Contra Costa County, who are interested in starting a business from scratch or have already started but may have become overwhelmed.

Read the rest of the story on the Richmond Pulse.