After being closed for nearly a year and a half, the multi-million dollar renovation of the  Richmond Swim Center reopened to the public on Saturday, bringing a new design and greater amenities to the public.

“Our residents and community deserve a first class swimming facility where they can take lessons, exercise, and be proud of the amenities we have in Richmond,” said Mayor Tom Butt in a statement before the opening.

The redone swim center features an Olympic-sized swimming pool, retractable skylight, and outdoor play area with a courtyard and picnic tables surrounded by contemporary drought resistant landscaping, including a plush artificial turf. As a collaborative effort between the City of Richmond and the WCCUSD, the funding for the $7.6 million renovation came from construction bonds from the West Contra Costa Unified School District and the City.

The reopened swim center will also host new programs for the public and students at nearby Kennedy High School. The swim center, when originally built, was named in honor of longtime teacher and Kennedy High swim coach William Randolph. 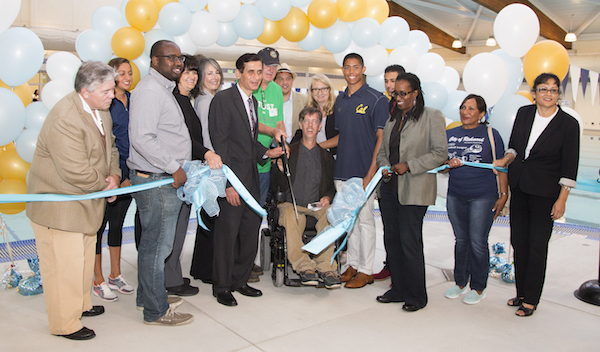 Water fitness classes, family and recreation swim times will be available within the next week, while aqua zumba and swimming lessons will pick up in January.

In his opening remarks City Manager Bill Lindsay said that the target date for the public’s use of the renovated facility is November 1. For frequent pool users like septuagenarian Texanita Bluitt, she can’t wait. After nearly a year and a half of trekking to the The Richmond Plunge in Point Richmond, Bluitt is looking forward to using the newly-renovated center.

The reopening of the Richmond Swim Center, together with the rebuild of Kennedy Park on Saturday, brings increased access to new, high quality amenities to all Richmond residents.