Let’s be clear about this. My beef is not with the RPA, which includes hundreds of thoughtful people who want to improve Richmond. My beef is with the three City Council members – Let’s call them the RPA-3 – who as standard bearers for the RPA have left the rails and are putting Richmond in danger.

First it was space weapons and mind control, clearly a priority for the vast majority of Richmond residents. From there, they segue to rent control in the city with the cheapest rents in the Bay Area. For them, the sky is falling and gentrification is coming to Richmond. Gentrification in Richmond? You’ve got to be kidding.

Now, they want to create more high-paying public sector jobs for their public employee union friends with unfunded pension liabilities in a City that has just lost its credit rating.

The latest RPA-3 crusade you will see on the City Council agenda, is an ordinance that would prevent landlords from doing criminal background checks or asking about criminal history of prospective tenants. Want a child molester living next door? No problem, the RPA-3 will remove all barriers.

In the article that follows, Jovanka Beckles calls me a bully, the favored RPA-3 terminology for anyone who disagrees with them. A bully is actually defined as one “ who uses strength or power to harm or intimidate those who are weaker.” In this case, she is talking about a Chinese-backed, established wine company that is spending millions to set up in Richmond and renting the Riggers loft at a bargain basement price. They are well-financed, sophisticated and experienced – hardly the profile of a bullying victim. They are not what might be considered “weaker” individuals. They certainly have more money, more power, more employees and more influence than I do.

Power has gone to the heads of the RPA-3, and they will stop at nothing to try and create their vision of a utopia on Earth right here in Richmond.  Utopias are great, but most of the people I talk to just want potholes fixed, parks clean, crime under control and a good job.

Right now, the RPA-3 control the  City Council, with the frequent support of Vice-mayor Myrick.

So buckle up, utopia here we come.

The increasingly contentious relationship between Mayor Tom Butt and members of the Richmond Progressive Alliance on City Council boiled over Wednesday, with the mayor slamming the RPA for pandering to public employee unions in the city budget and for voting to move a vintage World War II cargo ship away from the national historical museum.

The vote to move the SS Red Oak Victory to Basin 5, away from the Rosie the Riveter National Historical Museum, “apparently signal(s) an end to a long and productive working relationship between me and the RPA whose support and votes could have turned the tide in a different direction,” the mayor wrote on his e-forum following the Tuesday night council meeting.  “We have collaborated for years … but it appears the RPA now wants to go a different direction.” 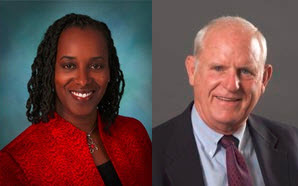 Councilmember Jovanka Beckles, who along with members Eduardo Martinez, Gayle McLaughlin and Jael Myrick form the RPA voting bloc on council, shot back at the mayor for being critical of the local businesses that requested the ship’s move.

Beckles called Butt “a bully who uses his influence to intimidate people and businesses.”

“What kind of mayor trashes his city’s businesses for standing up for themselves?” Beckles wrote on a Facebook forum. “Mayor Tom Butt sent out a misguided eforum this morning filled with vindictiveness that I’ve not seen in a city leader before.”

Butt also had strong words for the RPA for its support of the city budget, which though balanced included one-time funds and stop-gap measures that he claimed fail to address the city’s long-term indebtedness.  Butt and Councilman Vinay Pimple were the only council members to vote against the spending plan.

“It was the first budget in 20 years I voted against, and I did so because the RPA insisted, and the City Council majority supported, adding thousands of dollars for a growing number of frivolous festivals and adding direction to staff that any one-time revenue be prioritized to creating new job positions on the city’s street crew,” Butt wrote Wednesday.

“Instead of being concerned with the big picture of a tenuously balanced budget, the RPA council members were obsessed with micro-managing the road crew and the bookmobile driver, all part of their long-time pandering to SEIU Local 1021, which is, in turn, obsessed with increasing the number of public employees in a city teetering on the edge.”

The $144.9 million spending plan balances the books partly through the use of a quarter-cent sales tax increase previously earmarked for road improvements.

The $8 million windfall, known as Measure U, was approved by voters last fall.  While marketed by supporters as way to improve Richmond’s failing infrastructure, the city left open the option that the funds could be used for other “essential services” if need be.

The Red Oak Victory ship has been berthed at the Port of Richmond for the past 10 years, at a dock alongside the former Kaiser shipyard buildings. But the owners of a winery set to open at nearby Riggers Loft, a restored shipyard building, asked that the ship be moved. The owners want the winery patrons to be able to enjoy the expansive bay views now blocked by the towering ship.

Butt endorsed moving the ship to a slip known as Basin 5, now occupied by Foss Maritime, a ship towing service. Basin 5 is the alternative closest to the historic buildings of the national park.

But the majority of council voted to support Foss’s request to tow the large ship to Basin 1, another slip farther away from the historical park. Foss had offered to tow the ship to Basin 1 at no charge to the city; towing it to Basin 5, as the mayor wanted, would have cost the city at least $300,000.

“The Red Oak will now be isolated in a location that does not have adequate parking to support its growing number of popular events, and visitors to the Riggers Loft Wine Company and the Whirley crane will be forced for years to look at the vast collection of rusty metal shacks and junk equipment that Foss has assembled at Basin 5,” Butt wrote.

Newsletter and article originally published on the TOM BUTT E-FORUM and the Richmond Standard.