"What we have here is a commitment from Chevron to a process," said Sal Vaca, Richmond's director of employment and training. "They will work with the unions to prioritize training and local hiring for their project."

The agreement, signed by the city, local trade unions and Chevron, promises to prioritize the purchase of goods and services from local businesses for the project, which will be reviewed by the public and the City Council this spring and summer.

The project is expected to create 1,000 construction jobs. Chevron will provide monthly reports on spending and hiring to monitor the progress, Vaca said. 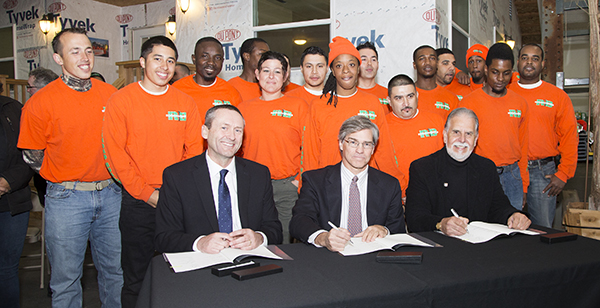 "We are looking for 20 percent of local hires to be Richmond residents," Vaca said.

Although the agreement includes no concrete requirements for local hiring or spending, Chevron and city officials said the commitment to maximize local economic impact is understood, and the monthly reports will be a powerful incentive.

Chevron and the City Council have repeatedly clashed in the past, especially in the aftermath of an August 2012 fire at the refinery that was caused by poor maintenance of corroded pipes.

The refinery has coupled its new proposal with a blitz of advertising and community investments, which many view as an attempt to curry public favor for the project.

The agreement was announced Wednesday morning at the RichmondBUILD Facility at 500 23rd St..

"One of the axioms of management is that you will do what you measure," said City Manager Bill Lindsay. "This is the strongest agreement the city has ever had on a project like this."

Chevron General Manager Kory Judd said leveraging new investments in the communities in which it operates is not new.

"I don't know that this agreement is unusual to Chevron," Judd said. "We are applying good models here that we have used elsewhere successfully."

If the city approves the project, work could begin next year, according to Chevron officials.