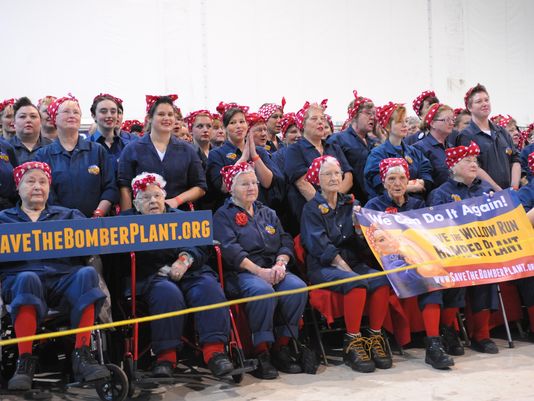 In March 2014, 776 women, children and even babies gathered at Willow Run Airport to claim the Guiness World Record for the largest gathering of women dressed as the iconic World War II poster girl Rosie the Riveter.

The record stood until Aug. 15 when 1,084 women gathered at the National Rosie the Riveter Park in Richmond, Calif., for the “Keep the Spirit of ’45 Alive!” celebrations.

Inspired and challenged by the phenomenal result, the organizations of Willow Run are coming together to reclaim the world record and prove that Michigan is the physical and symbolic home of the original Rosie the Riveter.

The Michigan Aerospace Foundation, Yankee Air Museum, and Wayne County Airport Authority have announced that included in the effort to save part of the original Willow Run Bomber Plant, an attempt to reclaim a Guinness World Record will happen on Saturday, Oct. 24.

“We are humbled yet thrilled that so many people in California came out to honor the women of WWII by breaking our world record,” said Kevin Walsh, executive director of the Yankee Air Museum. “Now we ask the women of Michigan to take pride in this historic local treasure and bring the record back home to Rosie’s factory, because victory started here.”

Sign-in will begin at 10 a.m. with the record setting photo to be taken at 2 p.m. Early arrival is encouraged due to an expected large turnout. There will be special guest speakers and entertainment throughout the day. The event is free and participants should register online at www.SaveTheBomberPlant.org. Costume instructions and recommendations also are available online.

“Michigan Aerospace Foundation, Yankee Air Museum, and the women of Michigan are doing tremendous work to make sure that the Willow Run Bomber Plant in Ypsilanti Township is known worldwide as the home of Rosie the Riveter,” said Michael Conway, director of public affairs for Wayne County Airport Authority. “Willow Run Airport and the Wayne County Airport Authority are excited to once again help sponsor the Rosies as they set out to reclaim the title as world champions.”

According to Dennis Norton, president of the Michigan Aerospace Foundation, the Save the Bomber Plant campaign is well into the beginning stages of restoration of a significant part of the plant. He said the project demonstrates the resilience of the entire community.

“The March 2014 Rosie record helped focus millions of people on our effort and I look forward to being there when these women retake the record and bring it back to Willow Run,” said Norton. “There is widespread ‘can do’ optimism inspired by these ladies.”

During World War II the Willow Run Bomber Plant produced 8,685 B-24 Liberator Bombers and employed more than 40,000 men and women. One of these was riveter Rose Will Monroe, more famously remembered as “Rosie the Riveter.”

When the Save the Bomber Plant Campaign reaches its next goal, estimated to be the end of 2017, the Yankee Air Museum will move from its current location on the east side of Willow Run Airport to the former bomber plant, and become known as the National Museum of Aviation and Technology. For more information about the “Save the Bomber Plant Campaign,” visit www.savethebomberplant.org.

Yankee Air Museum is a tax-exempt 501 (c)(3) charitable organization founded in 1981 to preserve and honor aviation history and its participants. The Museum works to positively excite kids and stimulate interest in Science, Technology, Engineering and Math (STEM) to help meet the challenges facing America. The annual Girls TEAM Summit On Oct. 3 is an example of the museum’s stimulating, experiential programming.