LEGALIZED EXTORTION UNDER THE GUISE OF DEMOCRACY Chapter 1

Be sure to look at Chapter 2.

For the past decade or longer, Attorney Scott J. Rafferty has been going up and down the state sending out threatening letters to school boards and city councils warning them that if they fail to acquiesce to his demands, he’ll bring legal action against the school district or the city—the kind of legal action that can potentially cost a school district or city more than a million dollars in legal fees—and, if they lose, another million or more when they have to pay the legal fees of the opposing side.

School Boards and city councils have to decide whether they should fight for the types of elections they’ve used for decades—the kinds of elections that have served their communities well—and possibly take valuable funds from the classrooms or community OR bend to the demands of Attorney Rafferty and implement his demands. 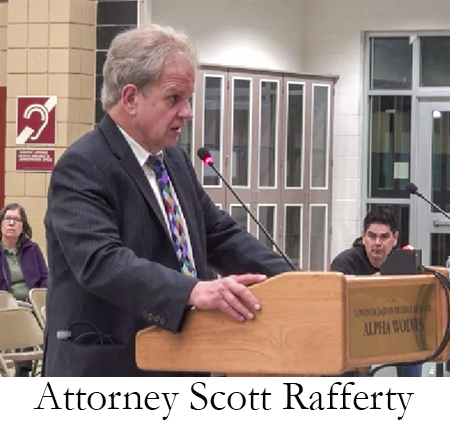 Attorney Rafferty’s letter makes a number of allegations about the electoral process here in West County that comes across as coming from someone who has a host of statistics at his disposal but really doesn’t know the District at all. He uses statistical data in fancy charts (that are difficult to follow) without really looking at the community.

In his letter, his allegations suggest that the only reason the WCCUSD does not have a majority of Board members that are minorities is because the voters specifically voted against the candidates because they were not white. It’s as if he thinks the only thing that makes a candidate qualified to serve is their ethnicity. It’s insulting to have someone come into our community and call us racists because we vote for a candidate based on actual qualifications when he seems to believe that the only qualifications that matter is the color of the candidate’s skin.

While many people have been fighting for equal rights in our community, there are others who think that “equal rights” means that one group should be given preference over another. Isn’t this what the fight for equal rights has been trying to stop? How is what Mr. Rafferty doing to promote a specific ethnicity any different from what we saw in years past where district were drawn to ensure that only white males were elected? It was wrong then and it’s wrong now.

What he is suggesting is much like legalized gerrymandering.

On January 20th, Mr. Rafferty gave notice to the WCCUSD that the District would have to abide by his demands to create subdistricts for the purpose of electing school board trustees or he would initiate legal proceedings against the District.

The Board had 45 days to declare their intention to move to district elections. The Board had the first reading of Resolution 64-1718 on 28 February declaring their intent. The second reading is scheduled to take place on Wednesday March 7th.   If the resolution is approved, the Board then has 75 days to specify its plan.

There must be a minimum of five public meetings to take community input and comment on the proposed new subdistricts.

The resolution’s intent is to have all of this implemented prior to the filing period for candidates (July 16th thru August 10th).

The resolution continues by allowing that if the logistics do not allow that everything is complete by this time, then the districting will have to wait until the 2020 election.

At the Board meeting of February 28th, Mr. Rafferty told the Board that any delays would not be acceptable to him. As with the many threats included in his letter, when he spoke to the Board he pointed out that there is always “an appellate remedy” to noncompliance.

Some of the problems associated with this process include hiring a demographer to review the District and take note of the pockets where specific ethnicities live. The demographer would then have to draw lines in such a way that it might help to ensure that a minority candidate from a given district might have an improved chance of being elected.

The five subdistricts would need to be of a nearly equal number of residents and the subdistrict needs to be contiguous.

When this has been completed, the County Board of Education AND the County Elections Office would need to sign off on the newly created and approved districts—all before the candidate filing period beginning on July 16th.

If new lines are drawn to determine subdistricts to be represented by Board members, there are five criteria that must be met:

Not to be considered are incumbents, candidates, and political parties.

If the WCCUSD School Board chooses to accede to Attorney Rafferty’s demands, their decision must first go before the Contra Costa Board of Education. Trustee Fatima Alleyne told the Board that their request could be fast tracked.

The request would then go before the State Board of Education (SBE) seeking their approval. The SBE only meets once every two months with the next meeting scheduled for May 9-10 and then again on July 11-12. Getting on the SBE May meeting agenda may be problematic and waiting for the July meeting will be too late to allow the potential candidates sufficient time to confirm their candidacy prior to the filing period beginning on July 16th.

Attorney Rafferty unequivocally states that by splitting West County into five districts, this will ensure ethnic parity that will help to ensure that people from a specific ethnicity might be represented by someone from that same ethnicity. In particular, he points out that the largest percentage of Asian residents reside in precincts situated in Hercules.

With a total population in the neighborhood of 245,000 residents, this would require each subdistrict to contain about 49,000 residents. Since one of the requirements for drawing the district lines is that the subdistrict must be contiguous, this would suggest that Hercules (pop 25,360) would be combined with Pinole (pop 19,293), which would have a population of approximately 50,281.

Please review the attached chart to see the approximate demographics of this combined district.

What’s important to note is the discrepancy between the total number of residents of a given ethnicity when compared to the number of registered voters. In particular, since Attorney Rafferty’s statistics show that an Asian would have a greater chance of being elected in this subdistrict because they have the highest percentage of residents (30%), they lag far behind when it comes to the percentage of voters (23% compared to 55% for whites and others).

So how does combining these two communities into one district make it easier for Asians to elect one of their own? And has there ever been an Asian from Pinole or Hercules that has ever shown an interest in running for the school board?

And there’s always the argument that people might vote for candidates of another ethnicity because they believe them to be more qualified. Contrary to what Attorney Rafferty suggests, there are voters who vote their conscience even if it means failing to vote for a candidate based on their ethnicity.

IF IT AIN’T BROKE—DON’T FIX IT

Backed up by his charts and tables, Attorney Rafferty makes a number of unsubstantiated claims without looking at any specifics that might contradict his assumptions.

He says, for instance, that the current Board is made up 40% with minorities when the preponderance of the students in the school are minorities. In the Board election in 2016, had one more minority candidate convinced the voters that they were the best qualified, then the Board would be 60% minority. Of the seven candidates running in 2016, two were white, three were Latinx and two were Black. Of those elected, one was white with the other being Black.

In 2016 Mister Phillips may have received votes from people who were not Black. Considering that there are only 16,486 registered Black voters in the WCCUSD and he received 28,018 votes, doesn’t this suggest that maybe people other than Blacks voted for him?

Were candidates elected because of the color of their skin? How about other factors such as the reported $686,000 spent by the charter school affiliates to promote their candidates? How about the fact that one candidate wrote that he/she would only hire Christian teachers? How about another candidate that campaigned that no matter what the law required him/her to do, he/she would never issue a charter for a school? How about that some of the candidates were virtual unknowns? And how about the possibility that one or more well known candidates had demonstrated that what they brought to the table was unacceptable? Could any of these factors have had an impact on the election’s outcome?

Going back to the early 1990’s this community has elected:

If the color of a candidate’s skin was the determining factor in getting elected, how did these ten Board members get elected—especially considering that not a one of them lived in a community dominated by their own race?

Is this one of those cases where there’s a supposed search for a solution to a problem when there is no demonstrated problem? Or is this yet just another payday for Attorney Rafferty.

He goes on to write about how these new subdistricts will promote democracy but points out that the Board is not required to actually go to the voters to seek their blessing for this radical change.

Going along with this concept, when the Board’s resolution was brought before the public, it was nearly midnight—LONG after most concerned citizens had left the meeting to prepare for the following day’s work schedule. There were fewer than a dozen community members left in the meeting when the Board. Is democracy being served either by Attorney Rafferty or the Board?

Attorney Rafferty states in his letter that he represents the Bay Area Voting Rights Initiative (BAVRI). Wanting to learn more about this august organization, the Internet was used. There were only two references linked to the organization’s name and acronym and both of those were references to newspaper articles over his recent actions against the City of Antioch.

Just who is BAVRI and why is so little known about them? Is this a one-person organization?