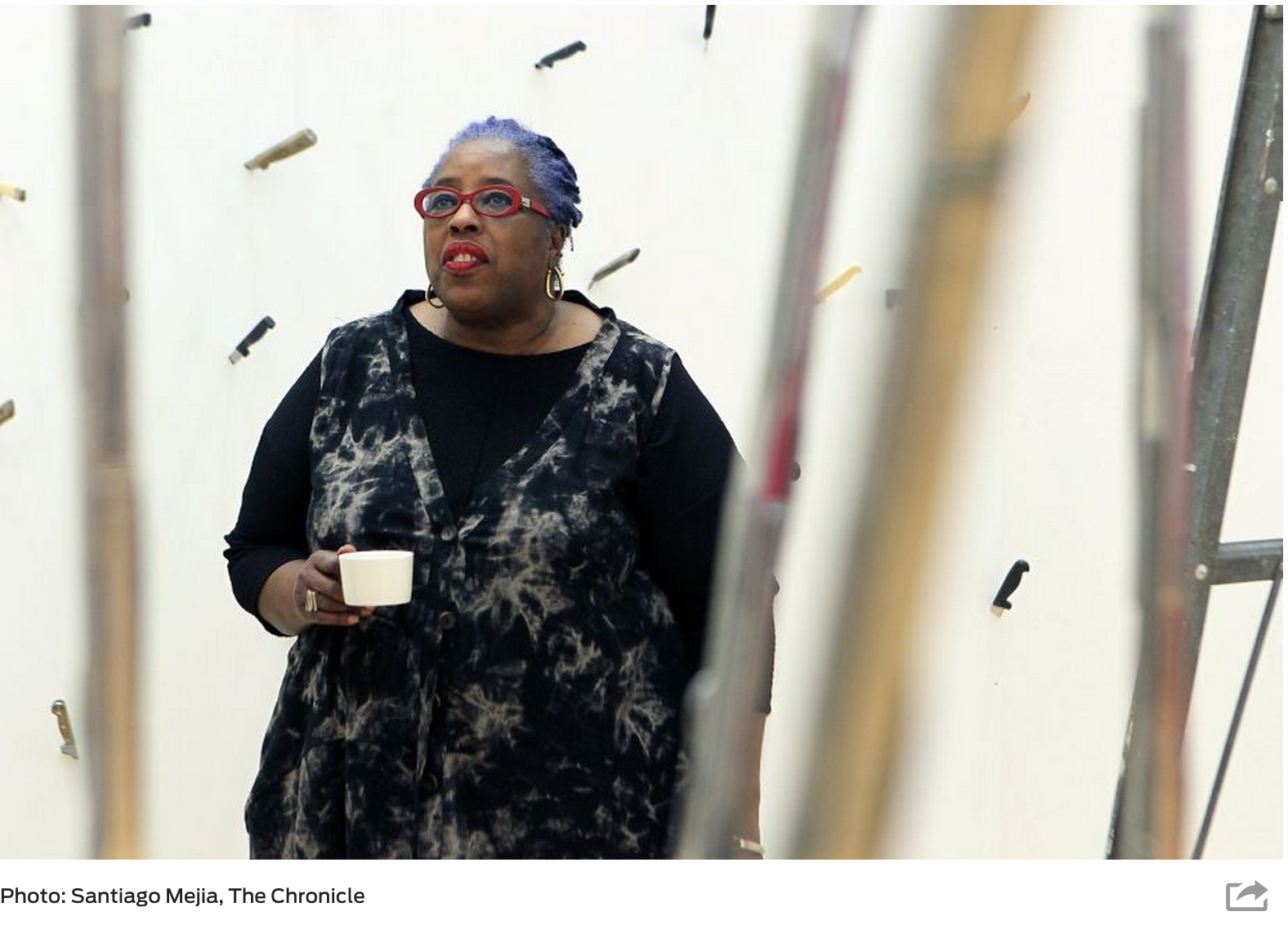 A tall narrow house constructed from knives, an old photo of a black family scorched onto World War II bond papers, and bright red boxing gloves hung on the wall above a stool. These are among the images in Mildred Howard’s new show at the Richmond Art Center (RAC).

Howard, a Bay Area artist who has shown her work around the world, focuses on everyday images and the memories they conjure. A house is not just a house —it is a beacon for the hidden pains and historical burdens of African Americans.

Howard’s RAC show, “Spirit and Matter”, is up through May 24 in the Main & West gallery. She recently spoke with Radio Free Richmond to discuss her work and the connection between memory and material. 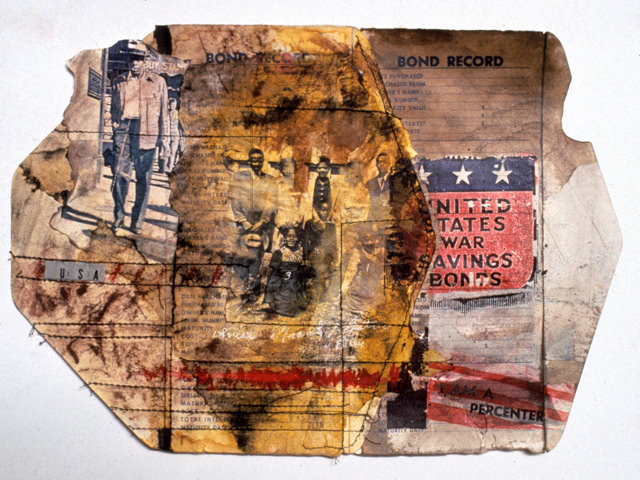 Sean Pyles (SP): How do you describe your work?

Mildred Howard (MH): My work is an ongoing inquiry and a consideration of identity and meaning and the relationship to objects on various planes —from personal to universal. In my sculptural work I try to set up these dialogues that define territories of disbanding between objects of environment, objects of memory, and objects of experience.

SP: Your work has been shown all around the world. What were your thoughts heading into a show closer to home, and in Richmond specifically?

MH: I think that Richmond is a really interesting city. First, it’s what the United States will probably eventually look like. It has such a diverse population. Richmond is still a place where you can have things fabricated —people actually do things with their hands. That interests me, right there. 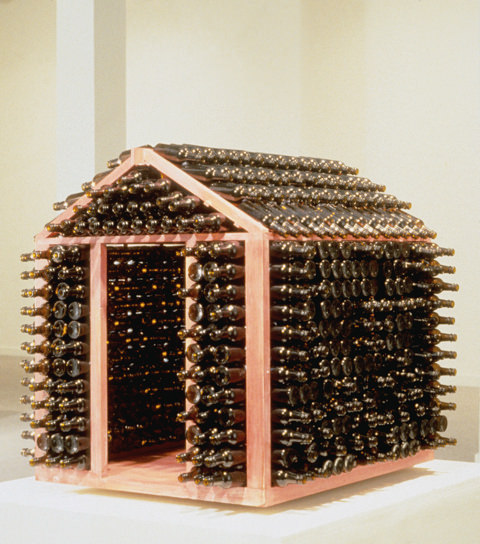 SP: It has been said that your true medium is memory.  How do the materials you use, like the house made of glass bottles, reflect this?

MH: Glass bottles are things that have multiple meanings across various cultures. In South America, in Mexico, parts of Latin America, you will see bottles around the peripheral of the house to keep the bad spirits away.

Empty bottles are also a metaphor for dead soldiers. You can look at them as containers, vessels. They’re all of these things that have multiple meanings. When you look at a bottle, for example, and light goes through —what happens? What kind of shadow does that conjure? If it’s a colored bottle, what happens as the light changes, as it reflects and refracts. It’s not only about the metaphor —it’s also about the physics of light.

SP: Can you walk me through your concept and creation of Safe House?

MH: For years I’ve been working on the idea of what constitutes home. Parallel with that were musing about when one says “America”, what does that mean? It was a parallel between what constitutes home. Home can be anything. It could mean so much, but, more importantly, one really thinks about a safe place. But a safe place is not always what we see. There’s this violence against women, violence against children that happens in the home.

When you look at that piece, it talks about all those issues. It also looks into how we place value on people and on objects in the home. So much happens behind doors of homes that are never spoken about. And the silver objects —these precious objects that sometimes never get used, are scattered through the house. Historically, the companies that made these fine silver objects also made shackles. So, in the house, whose frame is made out of dinner knifes, it goes from polished to tarnished. As you look through the house, as you walk around it, you see the difference between those pieces. 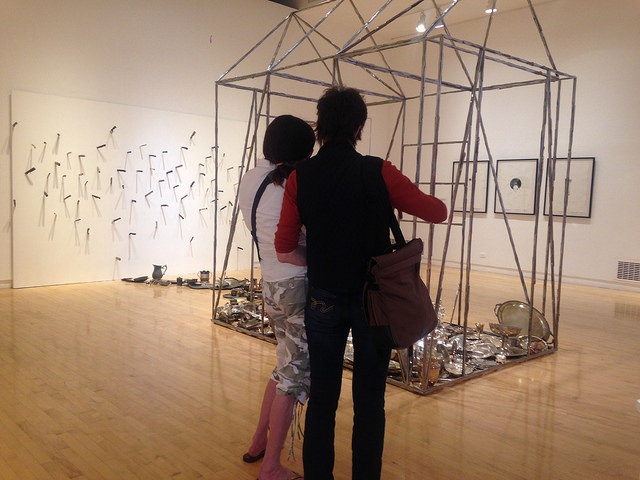 SP: Your work has unavoidably political themes, but you don’t describe yourself as an activist artist. How do you reconcile these two ideas?

MH: Everything that one does is related to how one sees life. I’m impacted like anyone else by what goes on in the world. It’s not just because I’m an artist that I’m not conscious of what’s around me. Artists are chronicles of history, and I interpret what I see and what I feel through my work. But more importantly I’m a maker. I make things. Just as a musician knows how to interpret what he or she feels behind the music, I see things visually.

SP: So it’s like the imagery of your pieces has this inherent baggage, and you are influenced by it, but you’re not necessarily trying to sway an opinion a certain way?

MH: Right. What I hope happens with this work is that people will begin to see the world from various perspectives. But the great thing about making art is that it allows the spectator to enter the work in a way that is comfortable —or not comfortable —to them. It addresses the viewer where they are. 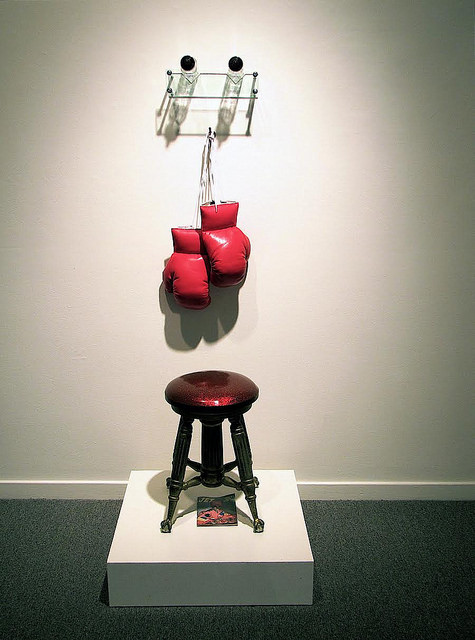 Beyond her show at RAC, Mildred Howard also has a large, sculptural piece of rusted, crinkled metal in permanent installation at the Richmond BART station. You can learn more about her current exhibit here.