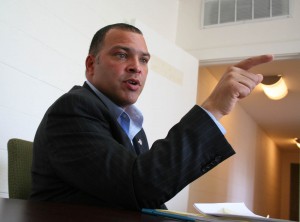 Four shootings marred Erie on Saturday, one killing a teen. It comes after two people were shot on Thursday, at the same time local leaders were attending an anti-gun violence forum.

Councilman and Blue Coat member Curtis Jones admits that the measures taken so far to combat gun violence in Erie have not brought about the changes desired.

"Not as effective as we want. Our shooting and violent crime rates are astronomical," Jones said.

But Richmond, California, a city also with a population of about 100,000, launched a program that's brought down homicide rates by 76 percent since 2007.

Now the program's success is gaining national attention. Last week, the New York Times published an opinion article by Boggan, where he encourages other cities struggling with violence to consider the program.

One piece of the program includes finding out who are the city's most dangerous individuals, and handing them cash as an incentive to stop pulling the trigger.

The deal: if they uphold a six-month commitment of engaging with their mentors, making progress with life goals, and staying out of trouble, then they can earn $1,000 dollars a month for up to nine months.

Initially, Richmond's City Council rejected the program, and the funds were raised through private dollars. Over five years, the program paid out on average $67,000 per year.

Over the phone, Boggan encouraged Erie to consider the program.

"If you're tired of being tired of this epidemic in your city and your community, you better do something different. I'd recommend leaders take a look at it, I'd recommend them call me," Boggan said.

Reposted from NBC station WICU. Find the rest of the story here.