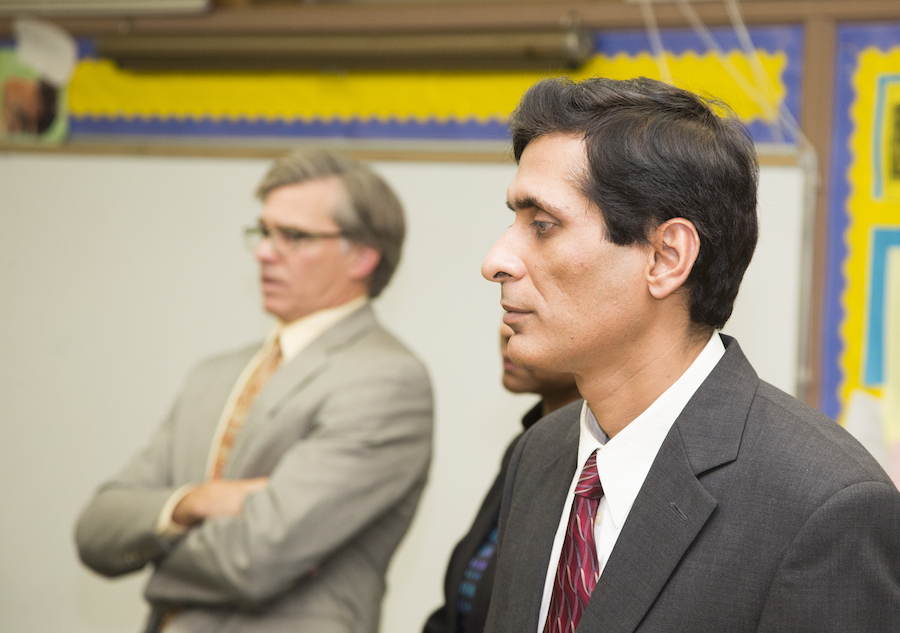 In a meeting where Richmond City Manager Bill Lindsay and the City’s finance director Belinda Warner along with Councilmember Vinay Pimplé were invited to explain the city’s current financial situation, Lindsay and Warner presented an image of Richmond where finances are on track for steady improvement, while Councilmember Pimplé cited numerous reasons for concern that countered the rhetoric from the city officials.

“The fiscal year 2014-15 showed improvements in all financial metrics,” Lindsay argued before the neighborhood council. “[The City] ended with a surplus of slightly more than $2 million.”

The improved financial situation came from a number of city positions being terminated or consolidated, a move which has reduced the city’s workforce by about 20 percent over the past five years.

“Budget choices are hard choices,” the City Manager explained. Cutting city staff inevitably results in a reduction of city services and results in overtime for current employees, Lindsay explained, “and those are some of the hard policy decisions the City Council has to make.”

Lindsay and the finance department are currently wrapping up an audit of the City’s 2014-15 budget, and they anticipate a report that shows a budget that came back from a deficit and into a surplus with an ending cash balance of $7.2 million for the city’s General Fund.

This is an improvement, the City Manager explained, but there are significant challenges facing the city, the most glaring of which are the city’s pension obligations along with low fiscal liquidity, both of which Lindsay cited as reasons for the recent credit downgrades from Moody’s Investor Services and Standard & Poors.

“Cash is king, and we want it in the bank, not in loans,” Lindsay explained.

According to the City Manager, city staff is currently drafting a plan to address unfunded retiree healthcare and benefits — known as OPEB — and the city continues to pay its general pension obligations through CalPERS, California’s pension program for state employees.

“Those are the issues we’re working on, and it’s something that’s not going to be easy. There are going to be hard choices every year,” Lindsay concluded.

Councilmember Pimplé disagreed with many of the points Lindsay made that argued for an improving fiscal condition in the city.

“I don’t see the past few years in the way that Bill has portrayed them,” said Pimplé. “One thing [Lindsay] didn’t mention was that among the several things Moody’s and S&P were unhappy with was unusually weak financial management.”

The Councilmember had a fundamental concern with the claim that the city had a balanced budget in the ‘14-‘15 fiscal year.

“One of the biggest things is the so-called swaption that we did last year,” Pimplé said. “Council wasn’t willing to do any cuts, so we did a swaption, which is basically a loan.”

“This is the single biggest factor why rating agencies are unhappy with us,” continued Pimplé. “You don’t borrow money just to pay annual bills.”

Because of the use of this swaption, Pimplé believes it disingenuous to call the city’s budget balanced. “We’ve been called out on this,” the Councilmember said.

Pimplé also had concerns with the lack of a public discussion on a five-year forecast for the city’s finances. Earlier this year city staff prepared such a report, but didn’t make it public because of internal disagreements, something the Councilmember found troubling.

“Yes, there are going to be hard choices, but if you never tell people the situation you’re in, you won’t have people prepared to make the hard choices,” said Pimplé. “It’s just going to kick the can down the road.”

Owen Martin, President of the Richmond Heights Neighborhood Council probed the City Manager about how the city was handling $2.2 million in reserve funds it received from the RecycleMore Joint Powers Authority, the local solid waste management organization.

Martin believed that the excess funds, since they were provided by the ratepayers such as himself and his neighbors, should be returned from whence they came, as Marin Clean Energy does on occasion, or saved for future infrastructure projects, instead of going to local cities.

Lindsay explained that the City recently received the $2.2 million, and that he recommends in the short term keeping the money in the bank and “have it looked at in the context of the ‘16-‘17 budget.”

City staff is preparing to give a thorough presentation on the state of the city’s finances — including the five-year forecast — at the City Council meeting on December 15, at which time another set of hard choices are going to be made, according to Lindsay.

The conversation this coming Tuesday is something Pimplé is looking forward to.

“We need to be having these difficult conversations soon after we have the forecasting tool,” he said.

The presentation before City Council will also bring an update on the status of the 2015-16 budget thus far, which city staff are expected to present as balanced.