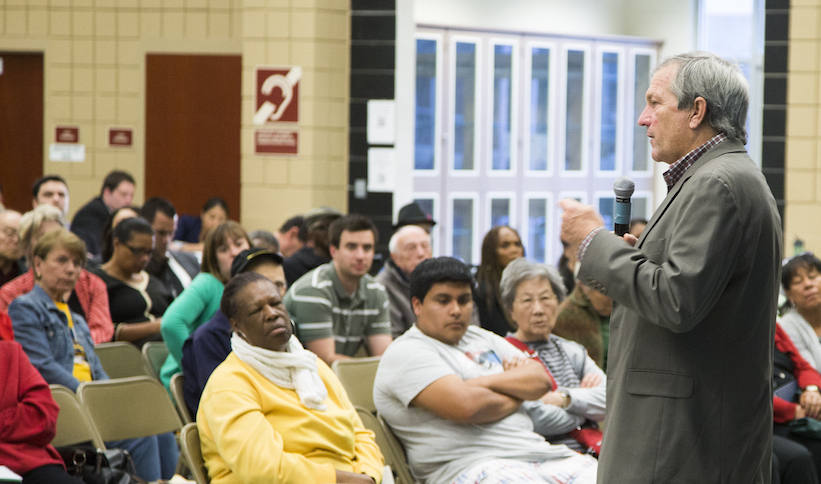 Congressman Mark DeSaulnier and the public both called on inequality and education as their greatest concerns in the community during a town hall forum at DeJean Middle School last night.

Speaking before the crowded auditorium, the freshman Congressman cited a direct correlation between poverty and a poorly-funded public education system as one of the greatest issues facing the United States and his district in particular.

One member of the public asked the Congressman whether there ought to be a limit on charter schools in the area. Though DeSaulnier initially supported them in Concord, where he resides, he has since changed his mind.

“In an ideal world, you would have all good schools,” DeSaulnier started. “In some areas the charter schools take the best teachers and resources, but it hurts everyone else. There are some things that some charter schools do well, and we should take them to all schools. But we shouldn’t allow further inequality.”

The freshman Congressman — who speaks for the area from Richmond out to Diablo as the representative of California’s 11th district in Congress — cited his efforts to combat these struggles as the beginning of the solution.

In his first 100 days in office, DeSaulnier introduced a bill to promote Head Start programs as well as the Family Engagement in Education Act, two endeavors to increase academic achievement in low-income communities.

Congressman DeSaulnier’s town hall was part of his effort to increase communication and openness with his constituents. If you have any further questions for the Congressman, you can call him at 510-620-1000 or reach him at his Richmond office at 440 Civic Center Plaza.