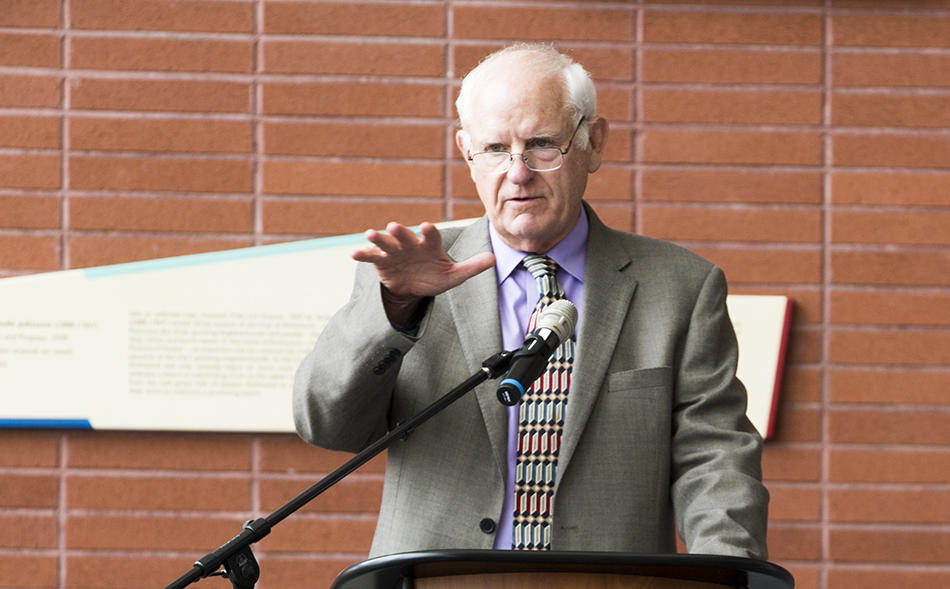 In the ongoing discussion of the proposed rent control initiative that’s being circulated seeking signatures to qualify it for the November ballot, Mayor Tom Butt and Councilmember Gayle McLaughlin have been offering their opinions on the merits of the initiative.  Radio Free Richmond is posting their unedited comments so the voters can pick and choose which points are valid and which are not.

Here is the latest response from Mayor Butt:

This is a response to Councilmember McLaughlin’s “Email from Gayle McLaughlin April 9, 2016,” (http://www.radiofreerichmond.com/gayle_mclaughlin_clarifying_richmond_s_rent_control_measure) that disputed my critique in RPA Hits the Streets with Rent Control Petitions, April 3, 2016.

One thing we all agree on is that demand for housing in the Bay Area is outpacing supply, and that has resulted in increased rents. Rent levels throughout the Bay Area are particularly challenging to renters at lower income levels who are spending an increasing proportion of their income on rent, in many cases more than the 30% deemed a reasonable maximum. In 2015, 54.9% of Richmond renters were paying in excess of 30% of household income for rent (http://www.ci.richmond.ca.us/DocumentCenter/View/31210).

What we don’t agree on is the municipal policy framework that can best address this issue. The Richmond Progressive Alliance and its allied organizations have chosen rent control as their flagship and essentially exclusive response and are conducting an initiative petition campaign to place Rent Control and Just Cause on the November 2016 ballot as an ordinance.

We believe that Rent Control is a failed experiment that has resulted in some of the highest rents in the United States in Bay Area cities that embraced it decades ago, including Oakland, Berkeley and San Francisco.

Unfortunately, some members of the RPA Steering Committee have characterized those of us who oppose rent control as deficient in empathy and compassion. I think we all appreciate the impact that rising rents have on those least able to cope, but I simply don’t buy the  solution of rent control that has such a widespread history of failure. This is not a contest to see who has the most empathy and compassion; it should be an effort to seek the most effective solution.

Instead, I have embraced a number of solutions that address the supply side rather than trying to regulate it. This is what the Mayor’s Office is doing:

The proposed Richmond Rent Control ordinance is based on the two most aggressive rent control bureaucracies in California – Berkeley and Santa Monica, but Richmond’s is even more aggressive. Both Berkeley and Santa Monica, compared to Richmond, are wealthy cities with significantly higher rents that can better afford the exorbitant cost of the regulatory rent control bureaucracy, but Richmond can’t.  The Berkeley Rent Board has a budget of $4.5 million, a staff of 22 employees and Registration fee of $194 per unit. This would make the Richmond Rent Board the fourth largest department on the city based on budgets, exceeded only by police, fire and public works.

In a recent Grand Jury investigation of the Berkeley Rent Control Stabilization Board (BRSB), the Grand Jury found that the BRSB is a “…self-sustaining bureaucracy that operates without effective oversight and accountability. The BRSB's independence from the city of Berkeley contributes to excesses in its registration fees, in compensation for the director and members of the board and to perceptions of impropriety in personnel procedures.”

But do we need a nearly $5 million new department to regulate perhaps as few as 10 per cent of Richmond’s rental market that would exercise excessive rent increases? Whatever portion of the rental market that might benefit initially would rapidly diminish over time. It is the lowest income and youngest renters who are most transient. As they move out chasing jobs, education and other opportunities, rents mat be reset to market values. Rent Control has a lot in common with Proposition 13; those who can afford to stay put become major beneficiaries while the rest see few benefits. The spread between the cost of rent controlled units and non-rent-controlled units grows, and the inventory of rent controlled units continues to diminish until it is no longer significant. This is what happened in Berkeley, Oakland and San Francisco.

Just yesterday, I was discussing Santa Monica’s rent control and just cause ordinance with a Santa Monica City Council member and a Santa Monica landlord. I heard a lot of horror stories, like original tenants in rent-controlled units charging roommates so much that the original tenant is actually making money off the unit. Or tenants in rent-controlled units  renting them out on Airbnb at significant profit.

Following are specific responses to my original analysis by Councilmember McLaughlin and my response to her:

The use of the term “realtor” is strange, because “Realtor” is a copyrighted term describing a members of the National Association of Realtors. Not being familiar with the real estate industry, the drafters of the proposed ordinance probably thought it was a generic term describing real estate brokers or sales persons. Presumably, a Realtor ® would be barred from three of the Board positions, while an unaffiliated licensed real estate broker or sales person would not.

“Three appointed Board members (a majority), none of whom have to be citizens of Richmond, will have full authority of the City’s purse strings, with absolutely no oversight or control from the Council, the City Manager, or any other City department.  They may spend from the General Fund as they see fit, hire any employees they want, including staff attorneys, counselors, and hearing examiners, and enter into any contracts they want.”

“The Board may also pay themselves compensation as they see fit, and are not limited to the nominal amounts that most commissions are statutorily limited to.  They may establish a physical office of whatever size and cost they desire.

“Again, this ordinance DOES NOT state that the Rent Board has independent access to the General Fund.  It is the City Council that determines what comes into and goes out of the General Fund.   The reason for keeping the Board independent of the City of Richmond budget and to give the Board control over their own budget (with landlord fees approved by the City Council) was to put a firewall between the Rent Board's budget and the City Council's budget.  If the Board was part of the City of Richmond budget, then there would be legitimate concerns about General Fund money potentially going to fund the Board.   We wrote this ordinance specifically so that the Rent Board would be separately funded by landlord fees.”

Berkeley’s ordinance includes similar language about funding but, unlike the proposed Richmond ordinance, specifically eliminated the general fund as a source:

BMC 13.76.060(N): “The board is also empowered to request and receive funding, when and if necessary, from the City of Berkeley and/or any other available source for it reasonable and necessary expenses.”

BMC 13.76.060(F)(18): “Except as provided in Section 13.76.060N of this chapter, the board shall finance its reasonable and necessary expenses for its operation without the use of general fund monies of the City of Berkeley.

The bottom line is that this is just plain scary, giving three unelected people complete control over a multi-million dollar budget, including their own compensation, all of which is intended to be extracted from landlords who may or may not violating any provision of the ordinance.

By way of contrast, violating Berkeley's rent control ordinance is a civil violation subject to monetary fines and injunctions.

(e) Powers and Duties. The Board shall have the following powers and duties:

(2) Make adjustments in the Tent Increase and Decreases in accordance with Section 11.100.070.

(3) Set Rents at fair and equitable levels in order to achieve the intent of this Chapter.

Both Gayle and I were wrong on this. Rent is not “capped” at July 21, 105 levels, but that date does establish the base rent, and apparently allows a one-time annual increase to July 21, 2016, based on the CPI. After that, rent increases are solely at the discretion of the Rent Board as long as they are between 0% and 100% of the CPI.

“As most of us know, there are many rental units in which roommates live and share the rent.  A three-bedroom unit, for example, may have 3 roommates sharing the rent.   Should one of the roommates move out, the remaining tenants often cannot carry the rent without subleasing to a new roommate.   As the ordinance states, the landlord must be notified in writing about a proposed new occupant.  The landlord has a right to a reasonable refusal of the Tenant's written request.   But the main point of this section is that the landlord cannot evict a tenant if the original tenant(s) finds a subtenant or subtenants to replace one or more departed roommates on a "one-for-one basis" and as long as the landlord has been notified and has not reasonably withheld the right to sublease.”

“There is also protection for families in this section.  Perhaps a tenant marries or child is born to a family or a grandparent moves in.  There is protection for such additional tenants, although the maximum number of occupants per California Uniform Housing Code, even in these family situations, cannot be exceeded.”

“There is no reason for concern by landlords in situations of ‘just cause’ evictions for any tenants - including subtenants - since landlords can evict for reasons of failure to pay rent, breach of lease, nuisance (such as noise and/or non-maintenance of the property), failure to give access, temporary vacate orders, owner move-in, withdrawal from rental market, and temporary tenancy.”

Notwithstanding any contrary provision of this Section, a Landlord shall not take any action to terminate a tenancy based on a Tenant’s sublease of the unit if the following requirements are met:

a. The Tenant continues to reside in the Rental Unit as his, her or their primary residence.

b. The sublease replaces one or more departed Tenants under the Rental Housing Agreement on a one-for one basis.

Mayor Butt also takes issue with the landlord's obligation to offer another unit to the tenant during repair work that temporarily displaces the tenant. The ordinance states that if the landlord has another unit (that is vacant) he/she must offer temporarily that unit to the tenant at no more than the lawful rent of the unit that is being repaired.  This is only for a period of up to 90 days or less (if the repair takes less time).   This time-frame is a protection for the landlord so that the landlord can indeed evict the tenant after the 90 days (or less) from the vacant unit, requiring them to move back into the original and now repaired unit.

For an owner-move in eviction, the owner must move in within 90 days.  If they fail to do so, they must a) give the unit back to the tenant; and b) pay the tenant substantial damages.  Section 11.100.050(a)(6).  This will mean an owner will not be able to make any major repairs, even if necessary, before moving in.

Where the Landlord owns any other residential units in the City of Richmond, and any such unit is vacant and available at the time of service of the written notice terminating the tenancy, or at any time thereafter until the earlier of the Tenant’s vacating the premises or the entry of a judgment by a court of competent jurisdiction awarding possession of the premises to the landlord, the Landlord shall, as a condition of obtaining possession pursuant to this subsection 11.100.050 (a) (5) notify tenant in writing of the existence and address of each such vacant unit and offer Tenant the right, at the tenant’s option: