On progress and planning: A Q&A with City Manager Bill Lindsay 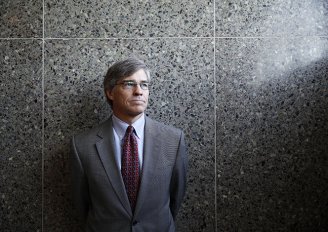 The job of city manager is arduous, complicated, and, as we have seen lately, often thankless. Radio Free Richmond talked with Richmond City Manager Bill Lindsay to better understand his role in the city and the work before him in 2015.

Radio Free Richmond (RFR):  Bill, thanks for taking the time to talk with us. To start, can you outline your overall responsibilities and give us an idea of what your days are like?

Bill Lindsay (BL): The way I would describe it is that I’m responsible for all of the day to day operations of all of the departments of the city. In that role, we also provide support to City Council in policy development.

On a day to day level, last week I met with a group of residents and city staff who are talking about doing a rebuild of a park on the city’s south side. Then I had a standing meeting with the City Attorney and the Human Resources Director. Then I had a press interview and a meeting to discuss a specific development proposal for veterans housing. That was Monday of last week. My day is typically programmed from beginning to end. It’s busy, and there are a lot of things going on.

RFR: What do you see as your biggest achievement of last year?

BL: I’m trying to think of things that actually got done last year. [laughs] I’ll start with something that was really very negative that we worked on to try to get resolved, and that was the Hacienda public housing development. There were a lot of reported problems and very early on we put a plan together on how we wanted to attack them. We followed through with every step, and we got approval from City Council in terms of how they wanted to approach it, and we followed that. We still are.

Now we have the tenants being relocated, and in my view that’s not the end — that’s a beginning of a new task, which is to get the tenants relocated in a positive way, and then to get the property rehabilitated.

RFR: There has been a lot of criticism about how long it is taking to resolve the issues at Hacienda and in the Richmond Housing Authority. Can you explain what’s happening?

BL: The thing is, you like to never have a problem like this arise, but in a city the size and complexity of Richmond, they're going to come up. You're measured by how you respond to these issues and how you fix them. But these things do happen. If you put 100,000 miles on your car a year, it’s going to break down now and then. It’s how you fix it and try to keep it maintained. Part of that is preventative maintenance, but eventually something is going to go wrong.

A lot of the time spent waiting was really things going through HUD. It’s not that they’re dragging their feet either. Things take a little while. Back to the car analogy, you have an assembly line, and everybody’s got a piece of what needs to be done. I understand the assumption that if you don’t hear anything, nothing is happening, but that’s really not the case. Things are kind of a work in progress.

In terms of preparing the Demolition/Disposition application, we have to work with architects and engineers, and they have to look at the building and at cost estimates. You have to make sure that those are reviewed and that it is an application that can be processed quickly. We want to make it right the first time because eventually that will speed it along. With the question of why it was taking so long, it’s because we want to make sure we’re doing it right. If we don’t do it right, it will actually extend the time it takes to remediate the problem. It’s a long process. You may know what you want to do and you might know how to get there, but you have to go through all the various steps.

BL: Well, we have, I think, an excellent list from the Mayor in terms of the priorities. I think it’s a good, ambitious list, and it’s one I think that really reflects what would be the broad consensus of the City Council of what the city’s priorities are. It’s not just the mayor’s agenda, and the city council is going along with it. I think this is the mayor showing some leadership and recognizing what’s important to the entire city council and to the community. We have a list of about 20 things that we’re pursuing.

RFR: One thing that comes to mind from that list is the annexation of North Richmond. Can you detail the legal process?

BL: We will initially get the nod from city council that they want to do some work on this issue, then there is a fairly complicated process. There is something called the Local Agency Formation Commission, which is the county agency which looks at governmental organizations. We’ll have to do an application through them. We want to make sure that we connect with the North Richmond community to see if this is something that they want to at least consider. There would need to be a detailed financial analysis done.

Right now, North Richmond is a part of the consolidated fire district and other special districts. All of that needs to be dealt with. Generally what we want to do is get City Council to see if they are interested in this, do outreach to the North Richmond community to get the nod that they are interested in looking at this, and then going through the application process and seeing where it lands. That will take the good part of 2015.

RFR: What do you think will be the biggest challenge that keeps you up at night in 2015?

BL: You phrased the question I think in a good way. What keeps me up at night — what keeps  me worried — is that we need to get the city’s financial house in order. We adopted a deficit budget last year, and we need to balance it this year. It’s not going to be easy to do. But we absolutely need to have a balanced budget in 2015 that will allow us to go forward in the next few years so that we don’t have to worry about drawing down on our reserves, because our reserves are going to run out.

RFR: How are you going to approach that?

BL: I want to get started a little bit early in approaching that, but the other thing is that in my own mind I am going to make a commitment to get directly involved in terms of generating an understanding of the numbers. I need to go down to the line item level to make sure what we can and cannot do. My background in city government is as a finance director, so I have experience in that. I think it’s time that I use that background and knowledge and make it work.

RFR: What do you see as the greatest strength that the city community has moving forward?

BL: As a community, everybody agrees that Richmond has great potential. And I’m looking forward to the day where people stop talking about Richmond’s potential and talking about how it has arrived. I don’t think we’ll ever stop having potential, but I think there is still a lot of things that we can take advantage of. This is a city that has a lot going for it. We need to make the most of it.