That was the magic number.  This was the number to beat if the good people of Richmond wanted to top the record they set last year for the most number of Rosie look-alikes gathered in one place. 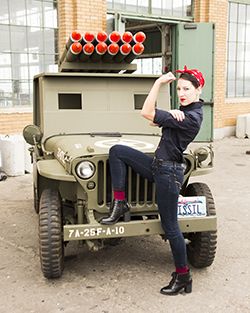 Knowing that Ypsalanti is attempting to retake the record on October 14th, the Richmond Rosies made another attempt to push the number out of reach. 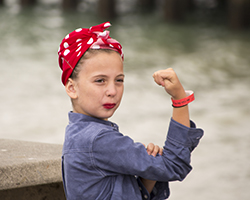 The Richmond shipyards were key to the success of the Allies in WWII having built 745 Liberty and Victory ships.  The Richmond resolve is something to behold but sometimes the stars don’t line up.  The weather on this Saturday morning was heavily overcast, it was cold and the winds coming off of the Bay sliced through anyone in the area.  Add to that the Outside Lands Music Festival was being held in San Francisco—attracting hundreds of thousands of fans.  And due to staffing issues, getting the word out about the event had issues (Radio Free Richmond learned of this event about 36 hours prior to the event). 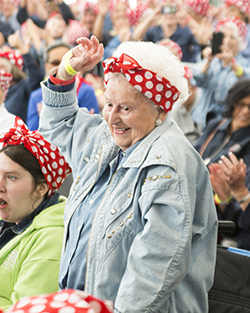 Some people expressed that maybe the thrill had worn off after two years.  It was a fun event for those that attended.  Please look at the seven photos posted on RFR’s Facebook site for many hundreds of images of the event.  The looks on the faces of the attendees says it all.

The front row of the assembled crowd was lined with Rosies from the shipyards.  Josephine Lico--at 102 and a half years old--was the featured star and looked like she could still pull her weight if needed.