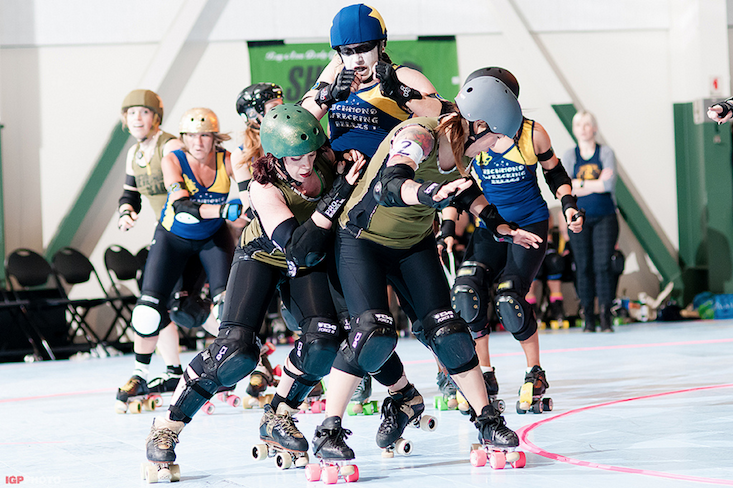 The Craneway Pavilion roared with passion, cheer, and a good deal of heckling Saturday as the Bay Area Derby Girls’ season came to a close. The evening’s double header faced the Richmond Wrecking Belles against the San Francisco ShEvil Dead in a game that gave the hometown favorite their first win of the season, while the Berkeley Resistance claimed the championship title over the Oakland Outlaws.

“I guess you could say it's a rebuilding year,”said Wrecking Belles player Eva Menace. With the loss of six key players from the team before the season started, the Belles at first struggled to find their rhythm. As a result, the team that won the 2014 championship was 0-3 until the match Saturday.

Before the game, Menace promised the Belles would deliver “full zombie annihilation”of the San Francisco ShEvil Dead, and, fortunately, that’s exactly what happened.

For a refresher, here is a quick explanation of roller derby, which, to greatly simplify, is a little like red rover on wheels.

Blockers: The three key offensive and defensive players. Blockers work simultaneously to block the opposing team’s jammer while helping their team break through the pack.

Rivalry: That between the Richmond Wrecking Belles and the San Francisco ShEvil Dead is a close one. San Francisco beat Richmond in the August match, and this was the final game for each team to get a win.

In regular Roller Derby Fashion, the points racked up fast in the beginning. Each team got some good jams going, and it was 6-7 Richmond just two minutes into the game, a score which jumped to 13-26 Richmond mere minutes later.

The stilted plays and clunky maneuvers that kept the Wrecking Belles from victory in previous games this season was gone Saturday, replaced by a forceful offensive and tight maneuvers.

In one stellar play, Wrecking Bell player Abomanatrix, in the role of jammer, essentially pirouetted around the ShEvil Dead blockers rather than forcing her way through their wall of defense. Her move worked, and she scored up half a dozen points for the hometown team.

By halftime, the Wrecking Belles were up to 102 points to the ShEvil Dead’s 77. The point gap was significant, but in roller derby such a point distance can be closed in a matter of minutes.

Fortunately the Belles kept up the aggression and coordination during the second half. Wrecking Belle Demanda Riot, notorious for her hard blows and even harder look, proved to be a solid block of defense for the team, often tripping or shoving over ShEvil Dead players just for the fun of it.

The San Francisco team threw some hard blows of their own. Belles jammer Val Curry bore the brunt of a flurry of elbows to the ribs and stomach as she worked to break through the ShEvil Dead defense, which proved strong if inconsistent.

Each team racked up points with jams big and small as the game progressed, and Richmond succeeded in expanding their lead over San Francisco. In the final seconds of the game, Richmond got in another jam and pushed the final score to 134-187 and secured a win in the 2015 season.

If the 2015 season was one of reorganization, it appeared that the Wrecking Belles found their flow by the end of the season. Only five months until the premier of the Bay Area Derby Girls 2016 season and the Wrecking Belles’next shot at claiming the championship.