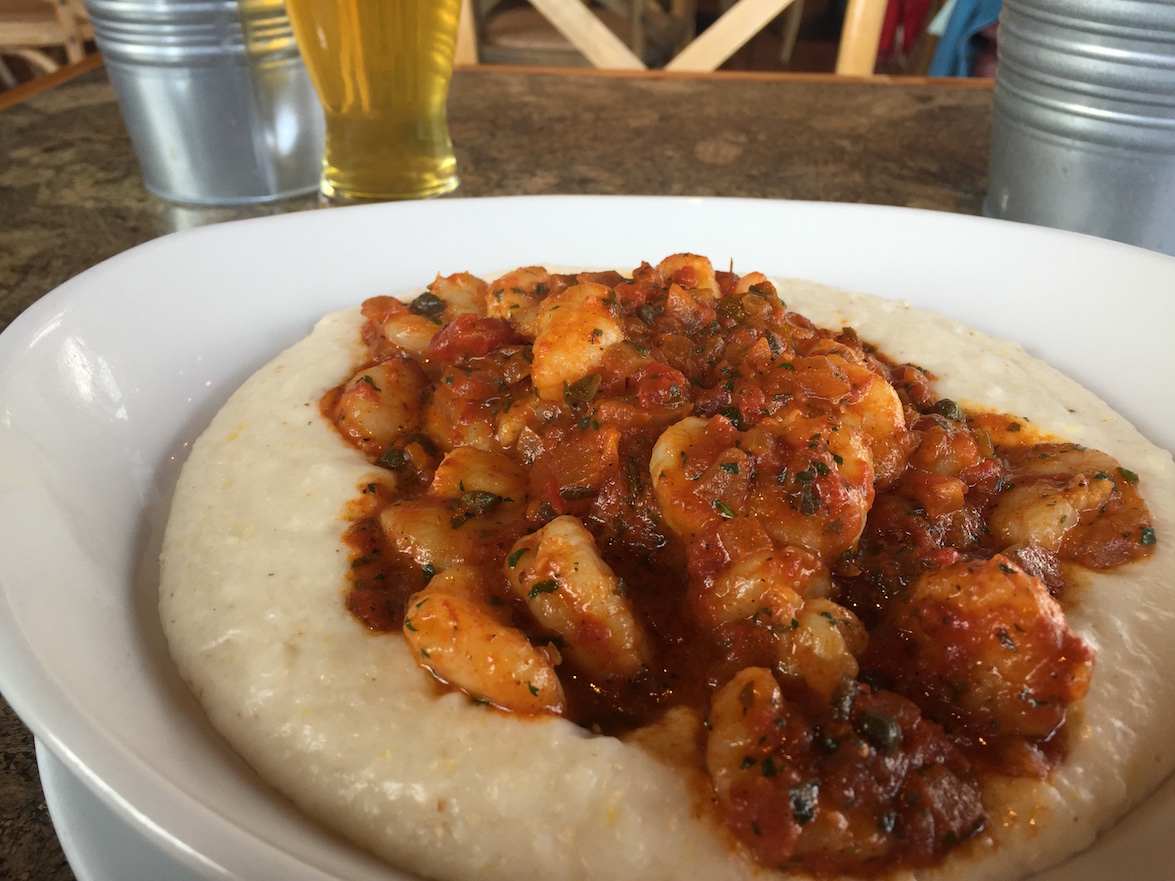 Assemble Restaurant is more than just a Richmond classic — it’s a beacon of American history, industrialism, and a certain propensity to cook and eat hearty food that sticks to the ribs.

While Radio Free Richmond has previously given Assemble’s cocktails a whirl (with mixed results), we had never before tried their food. To see what all the hype was about, this reviewer went to Assemble for lunch recently and was not disappointed.

Tucked away behind the Craneway Pavilion, next to the Rosie the Riveter/World War II Home Front National Historical Park, Assemble is right on the water of the Bay, and offers a spectacular, expansive view of San Francisco and the East Bay. On warm days, tables are brought outside for patrons to sit and take in the view while enjoying their meals. It was a touch chilly and cloudy when I went, but still the view made me pause before heading inside.

Assemble is attached to the Craneway Pavillion, which used to be part of the Ford Motor plant in another life, and signs of this industrial past persist in the restaurant’s interior and cuisine. Large pipes, boilers, and various machine parts are scattered throughout the restaurant, and the industrial theme is carried over to the dining experience through small tin buckets which hold cutlery and condiments. The restaurant even has its own victory garden on site where the chefs gather ingredients.

The restaurant’s interior is of another era, but their food is undoubtedly contemporary, even as it harkens back to classic American cuisine with a New Orleans influence.

Enormous Frito pies, which are a bag of Fritos bursting open with chili, jalapeños, tomatoes, sour cream, and cheese; boiled peanuts; and shrimp and grits are some of the best options at Assemble. Also not to be missed is their chicken pot pie, one of the most popular items on the menu. While these menu items could easily be found at just about any roadside restaurant in Texas, their execution at Assemble makes them of a different caliber.

Take the shrimp and grits, for example. One of the most straightforward dishes one can order is somehow transformed into a wonderfully complex dish that will leave you full for hours.

The dish comes out in a large white bowl with the shrimp resting on top of a large spread of grits. One bite of the grits alone confirms that there is, in the best way possible, an unreasonable amount of butter in this dish. It’s savory, creamy, and rich. The shrimp, which is tossed in a tomato sauce with capers, onion, and a good blend of spices, counters what could be overly rich and results in a well balanced dish.

Assemble also has a good selection of local beers on tap which pair well with just about anything one could order. I opted for the Fort Point IPA, which is from San Francisco. Crisp and not too hoppy, the Fort Point was a good companion to the enormous serving of shrimp and grits.

The restaurant was busy when I went for lunch, but still the service seemed oddly slow. My waiter, who was perfectly charismatic, would often hang around the bar for minutes at a time seemingly doing nothing, while I and my fellow patrons waited at length for water or our checks. One woman a table over ended up cancelling her order entirely because the service was so slow.

Still, Assemble is a restaurant that anyone who appreciates good food, Richmond history, and scenic views must visit at least one. The restaurant recently reduced its hours and is now only open for lunch, which can make it a little hard to visit, but patrons who can make it out will be glad they did.