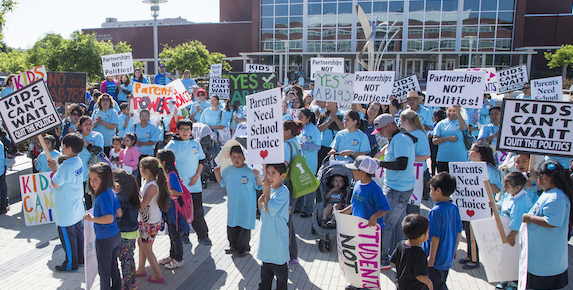 Families and supporters of local charter schools gathered to send a message to Assemblymember Tony Thurmond at Richmond Civic Center on Friday.

The rally was organized by the California Charter Schools Association (CCSA) to protest Assemblymember Thurmond’s vote in favor of Assembly Bill 787, which mandates that school boards assemble the board of directors for new charter schools starting in 2016.

“We think this is a problem,” explains Shawn Brown from CCSA. “Charter schools are about creativity and innovation, and if you allow a school board to appoint the board of a charter, you’re going to end up with the same schools that the parents didn’t want.”

Assemblymember Thrumond did not return requests for comment on his support of the bill.

The rally was passionate, if brief and casual. Over four dozen supporters donning CCSA t-shirts gathered in front of City Hall to cheer and boast their signs, and individuals stood before the crowd to give short speeches one after another. The entire event was just half an hour.

Many supporters held signs demanding “Partnerships, NOT Politics!” They called for an end of legislators’ overly-politicized involvement in charter schools, yet the CCSA itself is a fervent force in Sacramento politics, even offering a “Legislative Advocacy Toolkit” for parents.

The parents, kids, and charter school supporters who attended the rally Friday stood as a visual reminder of the people power behind charter schools, but it’s unclear if state legislators were at all impacted. Assemblymember Thurmond wasn’t present, nor were any representatives from city government. If CCSA continues lobbying this issue, however, it may be more difficult to ignore.