Earlier this month, and for the first time, the political arm of the California Charter Schools Association campaigned heavily against a proposed school construction bond in a district that hadn’t agreed to share the proceeds with charter schools.

The California Charter School Advocates paid for this anti-Measure H mailer, opposing West Contra Costa Unified's school construction bond. "The School Board is wasting our money and hurting our children. It's time to say 'no more,'" it said. 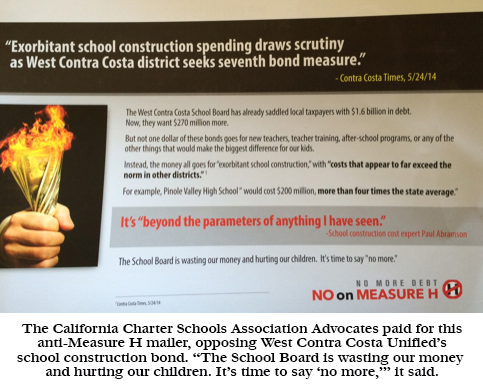 The $100,000 that it spent helped defeat the West Contra Costa Unified School District’s $270 million Measure H. It also sent a larger message to other districts with charter schools, said Jed Wallace, executive director of the California Charter Schools Association, a nonprofit education and advocacy organization representing most of the state’s 1,130 charter schools.

“If districts include us equitably, we will be partners with you,” he said. “You are on notice if you don’t. We will raise funds to defeat those measures that don’t treat charters fairly.”

Wallace also is a board member of the California Charter Schools Association Advocates Issues Committee, an affiliated nonprofit with some overlap in board members that funds candidates and campaigns. CCSA Advocates raised $1.7 million and spent about $1 million in the June primary, according to the Secretary of State’s Cal-Access website, leaving it plenty of money to back up its promise to watch other school districts putting bond measures on the November ballot.

The charter schools organization has thrown money behind bond measures and parcel taxes in the past decade: a facilities bond in Los Angeles Unified, a parcel tax in Oakland Unified and both a parcel tax and a construction bond in San Diego Unified, said Wallace. In the June primary, CCSA Advocates gave $5,000 in support of a construction bond measure for the Sequoia Union High School District in San Mateo County and $10,000 toward a parcel tax for the Livermore Unified School District. In both cases, the districts had promised to share proceeds proportionately with charter schools serving students from their districts, Wallace said. Both measures passed.

Under Proposition 39, which voters passed in 2000, school districts must provide charter schools with facilities comparable to those used by traditional public schools when the charter schools request it. However, they are not required to share parcel taxes or use construction bonds to renovate or build new facilities for charter schools. 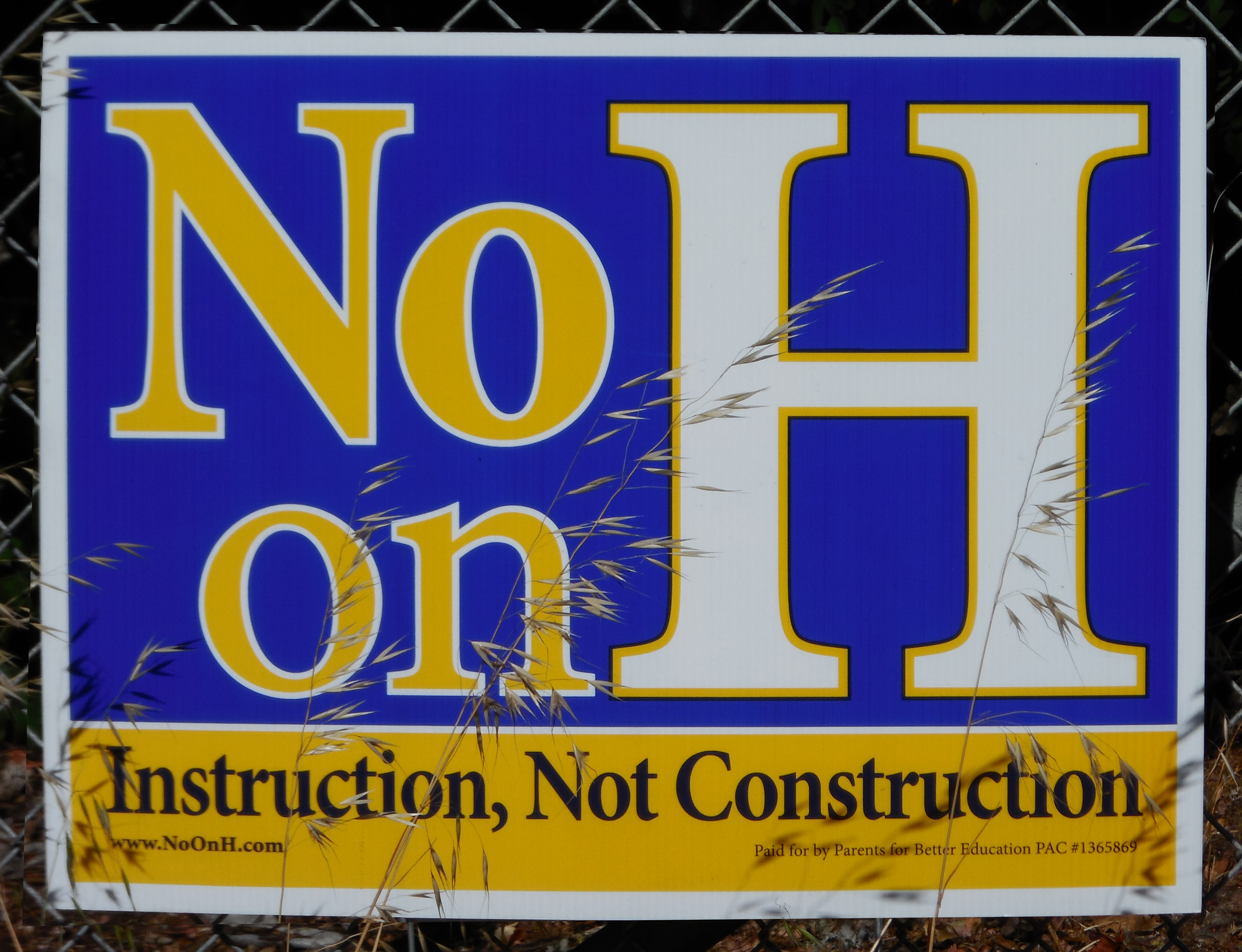 There are seven charter schools either operating or about to open this fall in 30,000-student West Contra Costa Unified, and not all of them liked the idea of having the state organization fight the local bond measure. Two charters had benefited from previous district bond measures. The district had spent $2 million renovating a building for Richmond College Prep Schools, and more than $22 million for Leadership Public Schools-Richmond’s new high school, due to open in the fall.

Leadership will share a campus with Gompers Continuation High School, a district school, and share gym facilities and a health clinic. Leadership also benefited from millions of dollars more in soft costs, such as architect’s fees it didn’t need to pay. Leadership, which is used to modular construction for its new buildings, could not have afforded such a well-equipped, expansive facility on its own, said Louise Waters, Leadership’s CEO and superintendent.

Waters said she wasn’t aware of CCSA’s decision to fight the bond and wouldn’t have signed on. “Local charters usually work with districts to build relationships,” she said. “This puts us in a difficult position.”

Jorge Lopez, the CEO of Richmond Charter Academy, a middle school in West Contra Costa Unified, agreed with Waters. The CCSA Advocates’ campaign “was like throwing a nuclear bomb in an already hot area,” he said, and will complicate building new inroads with the district. He, too, said he was in the dark about the opposition campaign until it began.

But Wallace and Diane Tavenner, CEO of Summit Public Schools and chairwoman of CCSA Advocates’ board, said the campaign committee acted after reaching out to most charter schools in the district, though they wouldn’t name them. Some chose not to speak out because they are worried the district might hold it against them when they seek a charter renewal or a Prop. 39 building request, Wallace said. Summit operates a charter middle school in West Contra Costa Unified.

“The rationale is pretty straightforward,” said Tavenner. “When districts go out for bonds, part of their due diligence is to be thoughtful about their legal obligation to provide facilities for charters; they should be serving all public school kids. West Contra Costa failed to do this.”

The Sequoia Union High School District, by contrast, she said, was proactive. “I got a call from the superintendent and the board to meet with me before finalizing the bond measure language,” she said.

It’s not good enough, Tavenner said, for a district to give one charter a beautiful facility while other charter students are not served. “There needs to be consistency in meeting their responsibility,” she said.

Charles Ramsey, chairman of the West Contra Costa Unified school board, said no one from the charter schools organization contacted him to ask that the charters be included in the bonds. In an email, Superintendent Bruce Harter confirmed that as well. Wallace said the charter schools first heard about the bond proposal days before the board voted on it, and by then the language had been written.

CCSA Advocates donated through a nonprofit set up for the election, the Contra Costa Families for Better Schools. It wasn’t the only group opposing the bond measure, but it was the best funded. The campaign capitalized on voter worry about higher taxes and stories in the Contra Costa Times about the high cost to taxpayers of the previous six construction bond measures since 1998, which total $1.6 billion. Supporters of the bond, primarily construction companies and architects who benefited from past bonds, contributed more than $400,000, according to the Times.

CCSA Advocates spent most of the $100,000 on mailers. One quoted a Contra Costa Times analysis that the district’s building costs “appear to far exceed the norm in other districts” and added, “The School Board is wasting our money and hurting our children. It’s time to say ‘no more.’” The mailer said it was paid for by the California Charter Schools Association Advocates.

Ramsey said he was angry that CCSA Advocates attacked the district’s credibility in its campaign. “We felt blindsided that it would put that seed in the mind of voters,” he said. “It was odious and nefarious behavior.”

West Contra Costa’s Measure H was the largest by far of the nine school bond measures statewide that were defeated in the June 3 primary election. Only 45 percent of voters backed it, far shy of the 55 percent threshold for passing construction bonds. Thirty-five California districts – nearly 80 percent of the 44 districts with bonds on the ballot – passed them, according to the California Local Government Finance Almanac.

Gary Borden, executive director of CCSA Advocates, said the campaign committee hasn’t yet supported a candidate in the race for state superintendent of public instruction. He said the committee will decide this summer whether to back Marshall Tuck, the former charter schools executive who will face incumbent Superintendent Tom Torlakson in the November runoff.