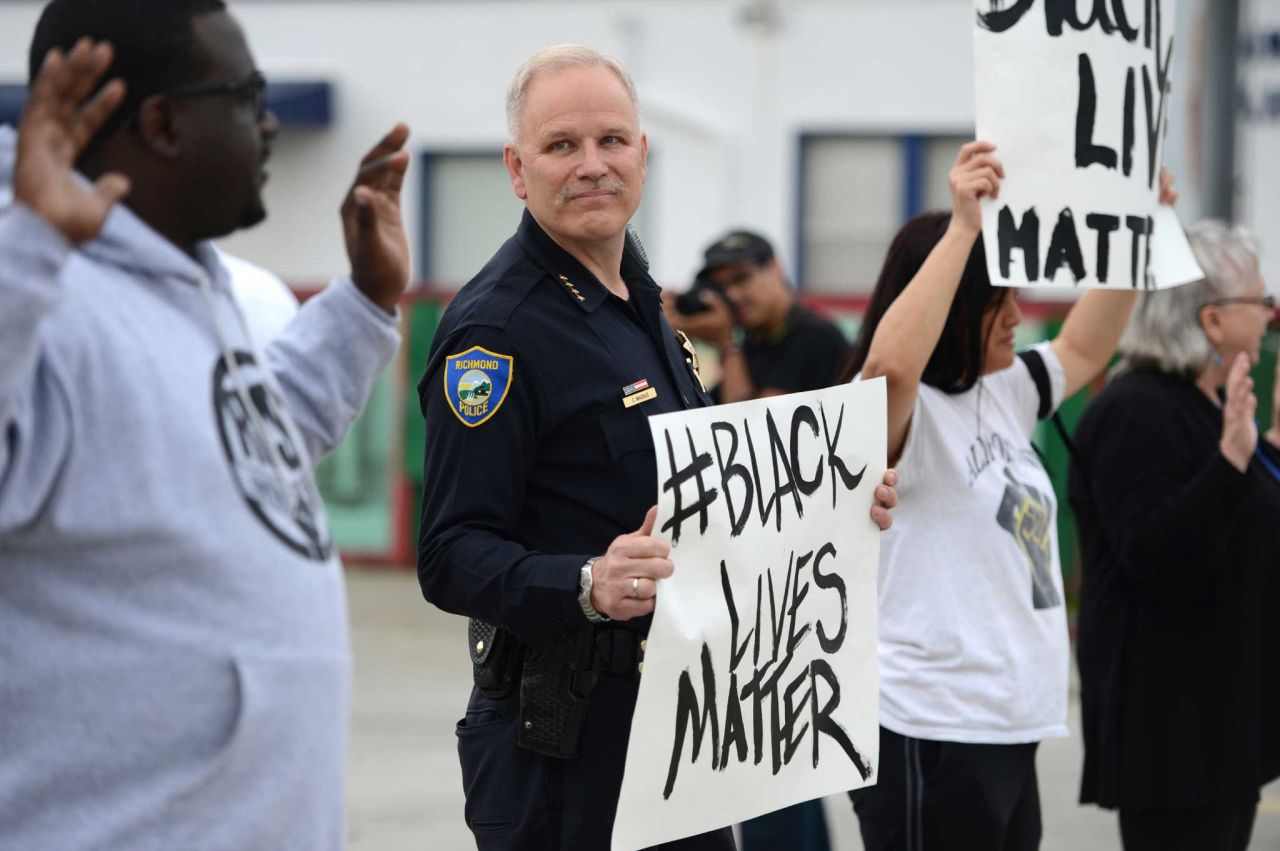 Richmond Chief of Police Chris Magnus made national headlines last week for attending a protest and holding a sign with "#BLACKLIVESMATTER" on it. Among national protests against police violence, many applauded the Chief's decision to stand in peaceful solidarity with the protesters.

However, the Richmond Police Officers Association (RPOA), was not as thrilled to see their Chief holding the sign while in uniform. Calling it a violation of the state's Government Code, which states that, “No officer or employee of a local agency shall participate in political activities of any kind while in uniform,” the RPOA found the act inappropriate.

The Chief today sent out an email defending his decision to hold the sign. You can read his statement below:

As you may have seen late last week, the POA raised a concern about a decision I made to hold a “Black Lives Matter” sign when a group of other command staff and I visited with residents, many of them young people, at a non-violent, entirely peaceful protest held near the RYSE Youth Center on Macdonald Ave. last Tuesday.

We went to this protest to make sure things remained peaceful and to reinforce the idea that we were open to dialogue with the protesters about police issues.  The people attending the protest were a friendly mix of neighborhood residents, activists, individuals involved in various local churches and non-profit groups, and youth.  I was asked several questions by a young woman of color, who then inquired if I would hold a “Black Lives Matter” sign.  I could have declined, but the message we are continuously trying to send to the community is that our department really DOES care about all lives—including black lives—and that we want the best possible relationships with every segment of the public we serve.

The complaint is that the sign I held was “political” and that I was therefore engaging in political activity while in uniform (an alleged violation of the California Government Code).  I respectfully disagree that it is “political” to hold a sign in uniform that says, “Black Lives Matter” when visiting a local protest where the vast majority of participants are skeptical about police commitment to equal justice.  I understand that some people see this differently, but I contend that what I did was reach out and commit to members of the black community that our department believes in treating them with fairness, justice, and respect.  It is completely consistent with our Mission, our community policing efforts, and our underlying commitment to the public that “All Lives Matter”, INCLUDING black lives.  Most importantly, it conveys  that we want to build bridges and strengthen relationships with persons of color in our city.

This was not about supporting a candidate, an election issue, or taking a position on any national-level case involving the police.  I agree it is usually inappropriate to do these things in public, especially in uniform or identified as an RPD officer.  On the other hand, I believe that making a very positive affirmation that “minority lives matter” is completely consistent  with the basic principles of good policing.

So, where are the lines drawn when it comes to representing RPD in public, particularly when in uniform?  Here are some guidelines that generally apply:

I have consistently been a proud supporter of our department and have stood behind our officers under many circumstances, including a number of occasions when public opinion was highly critical.  That does not mean I subscribe to an “Us versus Them” approach to running the department or handling issues that are raised by the community.  Let me be clear that interacting with community residents at a peaceful, local event does not equal support for the violence, rioting, or anti-police sentiment connected to similarly themed demonstrations in other places.  I will say the same thing to you that I said to folks at the protest:  I will consistently stand behind good policing and tough decisions that RPD officers make—but I will not defend misconduct, unjust treatment of the public, or poor service.

We are very fortunate to have much stronger relationships with members of the Richmond community than many police officers have with their residents in a number of other cities around the country.  These partnerships have helped us significantly reduce crime and build strong support for our public safety efforts.  Looking back historically, persons of color have not enjoyed the same kind of relationship with law enforcement that we are trying to make “the norm” in our city.  Thank you for all the hard work YOU have done towards bringing about this change and for your future efforts.

I understand and respect the opinions of those who disagree with me, but as Chief, it is my job to make the best decisions I can about how to represent our department.  That said, I always welcome your input, feedback, suggestions, and ideas because it helps me do my job better.