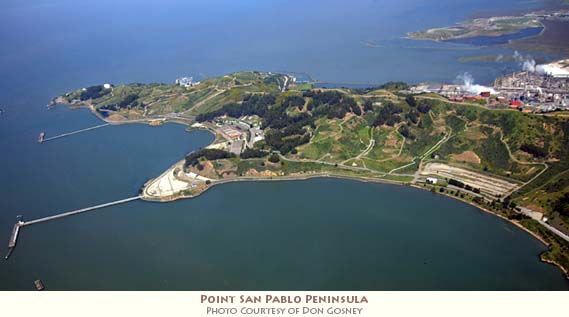 Point Molate may soon have a purpose. The Richmond City Council unanimously agreed last night to contribute funds for a real estate consultant to survey the area and make suggestions for best use. The funding of this consultant is the first step in the arduous process of rehabbing the troubled 412-acre site.

Funding the consultant is a joint venture from the Richmond City Council and the Trust for Public Land (TPL), a nonprofit which works to conserve lands for public parks. Richmond agreed to contribute $10,000, and TPL will pay upwards of $40,000 toward the hiring of Lynn Sedway, a respected real estate consultant who has worked in the Bay Area for over 40 years.

Sedway — who in the past helped establish the Mission Bay campus for University of San Francisco and facilitated the Lucasfilm campus in the Presidio — is charged with determining the best use for the space. Among the considered uses for Point Molate are a hotel, a winery, and a public park.

Upon introducing the item Councilmember Gayle McLaughlin looked forward to the possibilities of this partnership. “We all know that Point Molate was slated for a casino, it was rejected, and now we have new opportunities in place,” McLaughlin stated. “It’s time to start moving forward with Point Molate.”

Councilmember Nat Bates was skeptical of the endeavor. Citing a legal obligation to make the area economically sustainable, Bates questioned the motives of TPL, an organization dedicated to creating parks and open spaces.

“It is my understanding that the park has to include opportunity for employment through economic development,” Bates said. “If we suddenly turn that into open space, are we jeopardizing [Point Molate] being taken back by the government?”

Formerly a Navy Fuel depot, the United States Government sold Point Molate to Richmond for $1 a number of years ago. One of the conditions of the agreement was that the space had be economically self-sustaining. So far, the park has taken nearly 20 years to reclaim from oil waste, and it is estimated that updating basic utilities would cost nearly $60 million. Redeveloping Point Molate has been an uphill battle.

There has been progress at the park — the Point Molate Beach opened last year, and the cleaning crews broke ground on fresh a section of land late last year — but much work remains before Point Molate has a true purpose.

To learn more on Point Molate, read: “The Point Without a Purpose”