Among the many hats worn by Don Gosney is that of the current Chair of the Citizens' Bond Oversight Committee tasked with looking over the collective shoulders of the WCCUSD School Board and staff to ensure that the $1.8 billion in Bond Funds are spent according to the wishes of the voters and the law.

Don has been a part of the Bond Program since 1998 (even before it officially existed) and has served in the CBOC for more than 9 years. 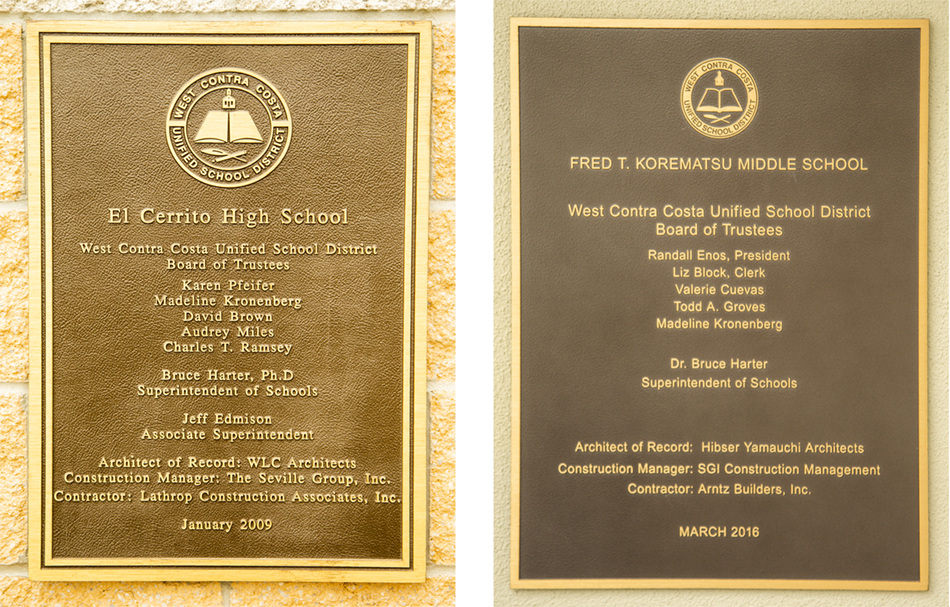 In recent years when the WCCUSD has completed a new school a commemorative plaque has been affixed to a wall so people in generations to come might know who was responsible for the fine new facility.

The question always should have been asked but especially now, with the lack of funds left in the Bond Program and the politics that has surrounded the Bond Program these past years:  “Why?”

What purpose do these plaques serve?

Let’s keep in mind that the cost for these plaques runs into the multiple thousands of dollars—funds that are taken away from the remaining schools.

Pinole Valley High School is nearing completion but cuts are still being made so the Pinole community will be getting less than what they were promised when they were asked to tax themselves for the next 40 years to pay for this new school.

Woodrow Wilson Elementary in Richmond has been demolished with a new facility scheduled to be built later this summer.  In another year or so the same fate will apply to Lake Elementary in San Pablo.

The problem with both of these schools is the lack of remaining bond dollars available to provide these communities with what they need.

Should Bond Funds be used to pay for these plaques?

Should the taxpayers be asked to pat the collective backs of their elected officials on the school board who are only doing what they were elected to do?  Actually patting their backs is one thing but spending thousands of dollars for a “pat” that will outlive them all is something else completely.

With Pinole Valley High, do we honor the members of the school board that serve us today or do we honor the many others that were involved with this project from when it was first envisioned through completion. Altogether there may be 15 or more Boardmembers that have been involved.

Do we attach an asterisk next to some of those names to let future generations know that these Boardmembers voted against this project and actually campaigned to kill it?  Does their hubris extend to hypocrisy, too?

And, in this case, we have two Superintendents who oversaw the District and the Bond Program during this lengthy process.  Do we honor the one that just showed up or both of them?

And the Associate Superintendents who were hired to oversee these projects, do they get their names on a plaque for showing up for work?

Then there are the EXTREMELY well paid architects, construction management companies and contractors—do the taxpayers get to pay to honor them for the next 50-75 years?  Shouldn’t they be paying the taxpayers for naming rights to these schools?

The hubris of elected officials that expect the taxpayers to spend thousands of dollars to place a near permanent honorific at the entrance of these money pits is laughable.

Is this what the taxpayers were promised when they were asked to pass these bond measures?

And a last note:  what date do you put at the bottom of the plaque?  Do you put the month/year of the ribbon cutting or the date a decade later when the work is actually completed?  [When was the last $20 million spent for the sports complexes at El Cerrito High?  Seven years after the school was “completed”?

If you have any thoughts on this, you are encouraged to contact your school board representatives: