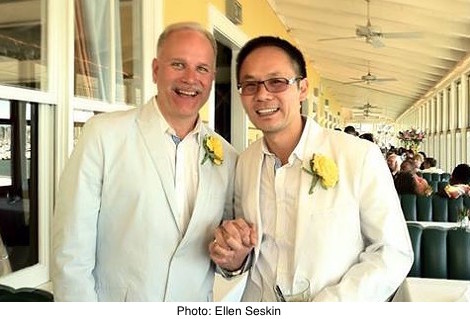 The walls of Salute E Vita Ristorante were packed Tuesday night with dozens of community members — from former mayors and councilmembers, to nonprofit leaders and friends — who gathered to celebrate the legacies and bid farewell to outgoing Richmond Police Chief Chris Magnus and his husband, Terrance Cheung, who is the outgoing Chief of Staff for Mayor Tom Butt.

The evening was a moment to reflect on the impact the two civic leaders had on their community before they head to Tucson, Arizona, where Magnus will take the reins as Chief of Police later this month.

“It feels a little surreal,” Magnus confessed amid the chatter of the restaurant.

When asked how it feels for Richmond’s power couple to be leaving their home of a decade, the outgoing chief laughed and said, “Well, I don’t know about that, but I can say that I’m excited about what’s ahead for us.”

As the light from outside faded and the sun set behind the Richmond Marina, a slideshow inside flashed photos of notable moments in both Cheung’s and Magnus’ careers, which often crossed paths. Images of the couple in attendance at the opening of the Family Justice Center last year reminded those in attendance about the pivotal role both played in supporting vital community resources.

“I realize that it’s going to be very hard to replicate the vision and accomplishment that Chris Magnus brought to the Richmond Police Department,” Captain Mark Gagan reflected Tuesday evening.

“From the first day, he showed a work ethic and commitment to the community that we all understood but couldn’t have initiated,” Gagan elaborated. “But I don’t worry about him leaving. I know that we’ve all grabbed on to Magnus’ ideas and will continue to implement them in the city.”

Cheung, who worked for several years in the office of Contra Costa County Supervisor John Gioia, who represents Richmond, became the Richmond Mayor’s Chief of Staff a year ago.

“This has been a tremendous experience,” Cheung said Tuesday evening. “I couldn’t have asked for a better community to be a part of and work in.” 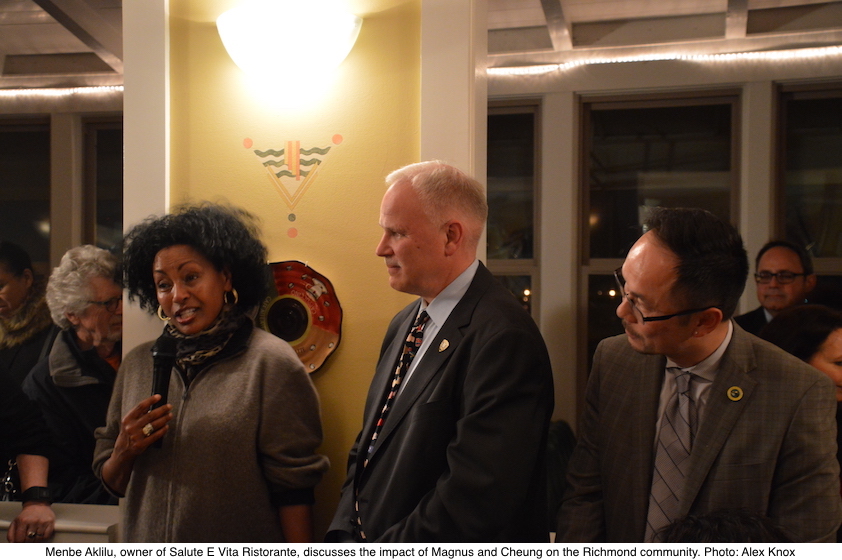 The crowd Tuesday was nostalgic on the impact both Cheung and Magnus had on their city.

“Terrance cares about people,” said Supervisor Gioia. Cheung was pivotal in securing funding and support for the new family justice center in the city, along with pushing for services for the county’s reentry population.

Over Magnus’ tenure, Richmond went from one of the most dangerous cities in the country to a model for community policing.

“We needed to make people understand that violence is a public health problem, and Chris understood that,” said former Richmond Mayor Irma Anderson, who pushed for his hiring ten years ago.

Anderson sees the recent uptick in crime as cyclical, and that persistent community engagement and adequate funding for the Richmond Police Department will help lower future crime rates.

“Magnus has been here for 10 years, but we’ve seen way more than 10 years of progress with him.”

Magnus’ and Cheung’s are now in their final days on the job in Richmond. Assistant Chief of Police Allwyn Brown will take the post of Interim Chief while the Richmond City Manager searches for a longterm replacement, and David Gray, currently the Mayor’s Director of Projects and Programs, will take over for Cheung.

In his closing remarks to the crowd, Magnus reflected on the work ahead for the community he and Cheung are leaving behind.

“We cannot take our foot off the gas, and it’s going to take the investment of everybody,” Magnus said. “We can’t lose sight of the goal: having a community that is safe, engaged, and moving forward.”