Community Puts in the Work to Rebuild Kennedy Park

Over 600 community members came together to paint, shovel, plant, and build John F. Kennedy Park in Richmond on Saturday. The formerly dilapidated park was abuzz with the energy and dedication of those working to revitalize the space into a community hub, which, along with the newly reopened Richmond Swim Center nearby, is changing the face of the neighborhood.

“When I went to high school at Kennedy, this was known as the fight park,” said Anyssa Hall, a Richmond resident who spent Saturday creating mosaics on the park’s trash receptacles.

“I would avoid the park, because we all knew what was happening here,” Hall said. “It’s been wonderful to see how much it’s changed in just one day.”

The park was first built nearly 50 years ago. In the years since, cracks snaked their way through the sidewalks, plants withered from neglect, and it naturally became a hub for illicit activity. With the help from the hundreds of volunteers on Saturday, Kennedy Park now boasts the city’s first outdoor fitness zone, a victory garden, a 5,000 square-foot mural, and play spaces for children, among other features.

The swift and well organized rebuild was the culmination of months of planning.

“Richmond parks should be viable destinations for our residents to play within their own communities instead of visiting parks in neighboring cities,” said Rochelle Monk, project organizer from the city. 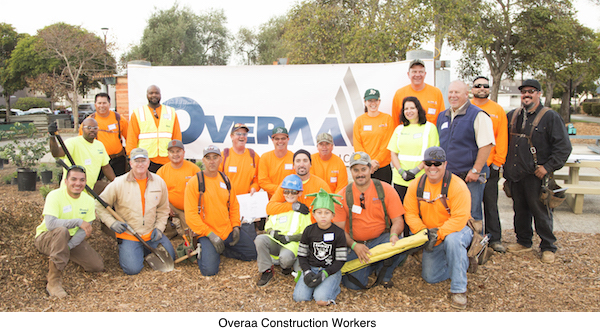 “With generous financial and technical support from The Trust for Public Land, the City of Richmond, in partnership with neighborhood residents we collectively identified this park as the site for our annual community-build park project,” explained Monk.

The park is well positioned to be a community hub in the city. Kennedy High School is just across the street, there’s a church right next door, and the upcoming Mira Flores housing development will be within walking distance.

“This used to be a place I would just drive by and ignore,” confessed Daud Abdullah, a local mosaic artist who worked alongside Hall to beautify the park’s trash cans. “I think that’s going to change. People who came here to build the park are going to come back and say, ‘I did this, I helped make this park,’ and they’ll feel like part of the community here.”

Saturday’s marathon rebuild of Kennedy Park was just phase one of its revitalization. Phase two will bring a renovated picnic pavilion that will serve as a STEM learning center, along with repaved basketball courts and new bathrooms.

Several local businesses and groups participated in the event.  Chevron—with Refinery Manager Kory Judd leading their work team—had a big presence.  Local contractor Overaa Construction was evident with their bright orange shirts as they lent their expert skills to rebuilding the horseshoe pits and numerous benches using the salvaged lumber from the old gazebo and trellis.  PG&E were also evident in their bright blue t-shirts helping to plant trees.  The Richmond Art Center adopted to sunken amphitheater where they painted a mural on the pavement. 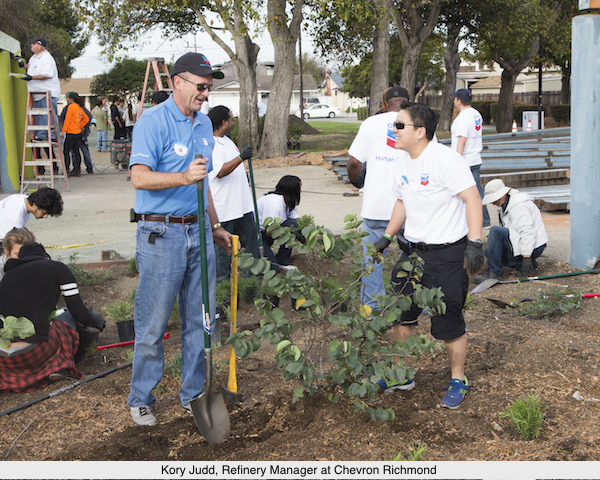 After volunteers finished their work on Saturday, many headed over to the grand re-opening of the Richmond Swim Center across the street. The newly rebuilt center, in tandem with the overhauled Kennedy Park, is opening a new world of public amenities to Richmond residents.

“It’s been incredible seeing everything here, and seeing all of the people who care so much,” said Hall. “It’s definitely the beginning of a new chapter for the area.”