Constance Gary: How Hacienda has Changed 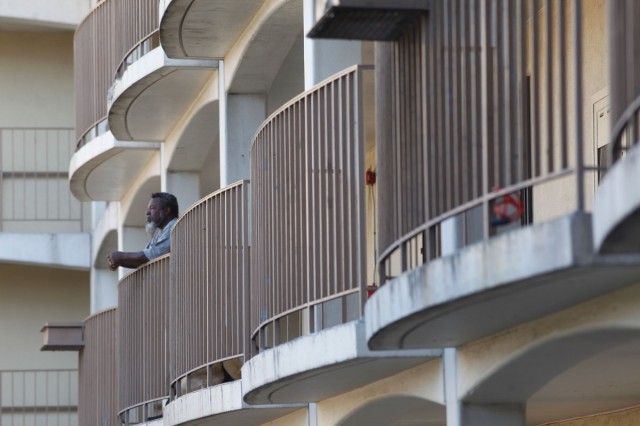 I moved into Hacienda 2004. Back then, well, it was pretty nice at that point. There were a few problems as far as roach infestations, but other than that, it was quiet. The grounds were well kept, and it was pretty okay.

It was about 2006 that things started to change. I started having having problems in my apartment. The roaches had gotten worst, and the bed bugs came in, and the mold started getting bad in my apartment.

I started having some breathing issues, and that’s when I found out that the roof above my apartment was leaking. When it rained I would have to put pots down on the floor to catch the rain so it wouldn’t mess up the tile.

I tried to have the management take care of the problems, and I wasn’t the only one having these problems — only I didn’t know it at the time. It rained a lot in 2006, and being on the 6th floor I saw the worst of the damage.

Eventually management supposedly hired somebody to fix the roof, but it wasn’t done properly. Because of all the problems that developed with the bed bugs, mold, roaches, they decided to tent the area. This was in 2009, and they hired a company to come in to try to get rid of all of the problems that were there. We moved out for 90 days while they tented the building.

But that didn’t work. For a year the bugs were gone, but then the problems came back. Then they started getting really bad. The bed bugs were jumping from floor to floor.

Things catapulted — it was one problem after another. Water was coming through the ceiling of the 6th floor. Around the elevators where I enter my floor, you could see where the water was constantly coming in through the ceiling, and the roaches would crawl around there. The ceiling started to crack.

By now it was 2011 and I was moved from the 6th floor to the 4th floor. The mold was so bad in my apartment that an investigator came and they told the Housing Authority that my apartment was uninhabitable.

Now we’re in the process of moving out. I’ve received my voucher, and just about everybody here has received their vouchers. Now that we’re all moving out, I think that the stress that people are going through is making life here worse. They’re having problems finding places, and a lot of people had to get extensions for when they’re supposed to move out.

I haven’t found a place yet, but I’ve looked in a couple areas. It’s hard, especially when you don’t have a car. My plan is to move until the building is remodeled. Then, I’d like to see if I could move back in. In the meantime, I’m still trying to find some place to move.

By: Constance Gary, resident at Hacienda