Contra Costa Times: Inside a former Ford plant, a robot takes step into the future 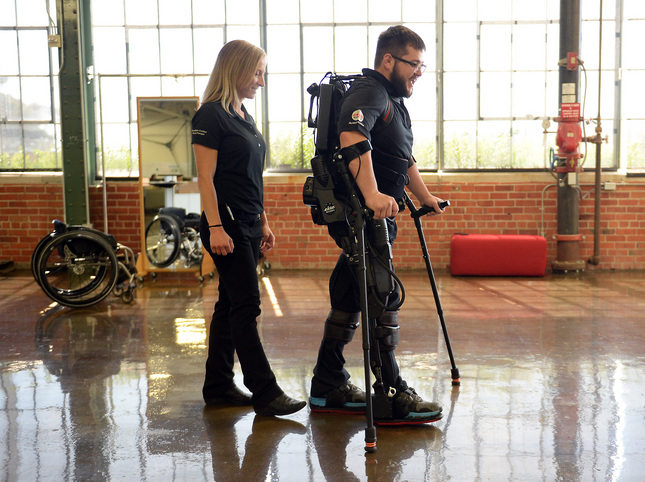 RICHMOND -- More than 80 years ago, Model A's rolled out of the gleaming new Ford assembly plant at the edge of the San Francisco Bay. Today the brick "daylight factory" with tall ceilings and an open floor plan is where state-of-the-art technology of a different era is manufactured -- wearable robots that help humans walk, lift heavy items and run faster.

Welcome to Ekso Bionics, a robotics company whose products include an external wearable body frame that soldiers can put on under their uniforms to help them carry heavy loads, as well as a device people with spinal cord injuries can wear to help them during their rehabilitation.

"It's not about being a Terminator-like machine," said Heidi Darling, a spokeswoman for the company, which went public in 2014. "We don't want to control the human but to augment them and provide just the right amount of power to meet their goals."

Take the Ekso GT. The exoskeleton, which resembles a brace with crutches and a backpack, was designed for people who have lost some or all use of their legs. It works when sensors in the device respond to weight being put on them, initiating the assisted steps. That ensures the wearer is aligned into a proper walking pattern, which could help the patient rehabilitate faster, the company says.

For people with full paralysis, the suit may help reduce pain, improve bladder and bowel function, and reduce health complications by getting patients with full spinal injuries out of their chairs.

On a recent day, 26-year-old Modesto resident Matt Tilford, who became a paraplegic after a car accident eight years ago, walked around strapped inside a bionic suit with the help of his physical therapist. No amount of rehabilitation will restore his ability to walk, but the suit, which he uses occasionally as an ambassador for Ekso Bionics, has helped improve Tilford's digestion and general well-being.

"When I was first hurt, I did a rehab program where I was put in a standing frame. But I wasn't moving around," Tilford said, adding that prolonged sitting in his wheelchair often makes his legs tighten. "The Ekso suit gives me a different perspective on the world, and (I can) look at people eye to eye instead of having the world look down at me."

Ekso Bionics got its start at the UC Berkeley Robotics and Human Engineering Laboratory when researcher Homayoon Kazerooni applied for and received in 2000 a grant from the Defense Advanced Research Projects Agency. DARPA, part of the U.S. Department of Defense, funds research and development of new weapons for the military. The result was BLEEX, a wearable robot that allowed soldiers, disaster-relief workers and firefighters to carry major loads of food, equipment and weaponry with minimal effort, followed by new exoskeleton models to help soldiers carry heavier loads without impacting their joints.

The Ekso GT was first released in 2012 and has since been acquired by some 100 hospitals around the world, including Alta Bates Summit Medical Center in Berkeley and the Palo Alto Veterans Affairs Hospital, the latter through a donation by Soldier Socks, a nonprofit that works with wounded veterans.

"It would take a lot for us to be able to get it on our own," said Michael Hill-Jackson, a spokesman for the veterans hospital. The suit, which retails for around $125,000, is used in the hospital's spinal cord injury unit and polytrauma center, where many returning veterans are treated, including patients with traumatic brain injuries.

"Ekso always makes sure the suit is up to date and that our physical therapists know how to use it," Hill-Jackson said. "They've been great to work with."

The rehabilitation robot market is expanding and expected to grow from $43.3 million last year to $1.8 billion by 2020, according to a WinterGreen report published last year. Ekso is not yet profitable, but analysts are optimistic about the company's future, citing its potential to transform the rehabilitation market.

"Our belief is that the GT will continue to prove to be an exceptional tool most appropriate for a variety of injuries and settings going forward," wrote Jeffrey S. Cohen, an analyst with Ladenburg Thalmann, in a company update last month. Cohen called Ekso "one of the most compelling medical technology companies."

Today, the company is led by Nathan Harding and Russ Angold and has 85 employees, most of whom work in Richmond. Many of its projects are with the U.S. military and its subcontractors like Lockheed Martin; others are focused on the health care market. Many are still prototypes, with more than 100 patents pending internationally.

Engineers at Ekso compare robotics today to an early model car or cellphone.

"From a technology standpoint, we've just barely started in terms of what the capabilities are," engineer Adam Zoss said. "The cool part is unlike most products that have yet to be developed, everyone can picture what the end result will be -- having full use of their legs. But how you get there is the hard part."