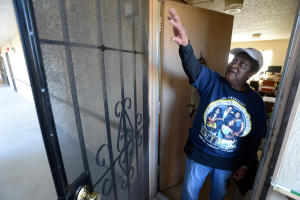 Re-posted from The Contra Costa Times: Prompted by revelations that Richmond's public housing agency is among the most troubled in the nation, City Council members say sweeping changes must be made and top housing authority officials are on the hot seat.

The housing authority is nearly $7 million in the red, fails to complete needed repairs on residents' units, has improperly authorized work contracts, keeps incomplete record books and provides inadequate security at many of its public housing complexes, according to news stories published in recent days by the Center for Investigative Reporting. A 2013 report obtained by this newspaper Wednesday from the U.S. Department of Housing and Urban Development, which oversees the housing authority, alleged widespread mismanagement by the Richmond agency.

Councilman Nat Bates on Wednesday said Housing Authority Director Tim Jones should be replaced and that City Manager Bill Lindsay bears some responsibility for the mismanagement and poor conditions in public housing units.

"Tim doesn't know what he was doing, so we need new leadership that not only replaces him but the people directly under him," Bates said. "Bill (Lindsay) is a nice guy, but he has problems making hard decisions. He wants to get along with everyone."

The reports also alleged questionable spending on the part of Jones and other agency officials, including lavish meals charged to a housing authority credit card and $61,000 in contracts in 2008 and 2009 that were steered to the brother of a top agency official.

During a special City Council meeting Tuesday, Jones apologized and acknowledged that his department has "fallen short" in serving its residents and needs to improve. But he also defended the agency, citing federal funding levels he said do not allow the authority to make needed repairs.

"There is not a systemwide failure in management," Jones said.

Jones also referred to what he called a "plethora of inaccuracies" in the news stories, a charge also made by Lindsay. Jones declined to elaborate, other than to say that the report that his salary grew 31 percent from 2008 to 2011 were incorrect.

Jones' base salary in 2012 was $162,432, according to this newspaper's public salaries database.In an email to council members before Tuesday's meeting, Lindsay said inaccuracies in the news stories called into question "the veracity of all that has been written or reported in this series."

Lindsay did not provide specific examples of inaccuracies in the stories and did not respond to a request for comment Wednesday. The HUD report, which was sent to city leaders last year, supported many of the findings in the stories, and a HUD spokeswoman contacted Wednesday did not dispute the stories' accuracy.

Jones' explanations did not satisfy council members or residents Tuesday, who expressed outrage at the news reports and the flurry of complaints about several issues, including disrespectful tones by housing authority staff, persistent vermin and insect infestation, inadequate heating systems and chronic water leaks and mold.

The media accounts were based, in part, on annual reports produced by HUD investigating each of the more than 4,000 housing agencies across the country. The Richmond Housing Authority gets about $26 million a year from the federal government to provide housing for the needy, according to Center for Investigative Reporting. In addition to its 715 housing units for poor, elderly and disabled residents, the authority provides vouchers under the federal Section 8 program to 1,750 Richmond residents who can use these subsidies to pay rent.

Words are scrawled on a hallway wall at the Hacienda public housing apartment complex in Richmond on Feb. 19, 2014. (Kristopher Skinner/Staff)

HUD spokeswoman Gene Gibson on Wednesday said the city's department has been "responsive" of late but that HUD remains concerned that local housing officials continue to provide inadequate documentation for how federal money is spent.

"We are concerned about (Jones') ability to get these problems resolved, but we don't hire and fire (local) executive directors," Gibson said.

But Bates said council members have been routinely informed by HUD that the Housing Authority is rife with problems, and have heard complaints from residents for years.

"We knew what was going on, but collectively we did nothing," Bates said.

"I cannot explain why someone who is on the City Council is not aware of something when those reports have gone out," Gibson said.

Richmond's housing authority has scored among the worst in the nation for years.

"The Executive Director is ineffective in managing RHA's programs ..." according to the HUD report sent to city leaders last year.

The news reports singled out the Hacienda complex off Roosevelt and Barrett avenues as the worst of Richmond's public housing complexes. Residents at Hacienda on Thursday welcomed the news that new leadership may be coming to the housing authority, and complained that their warnings of unsafe conditions, infestations and poor security have gone unheeded for years.

"If something breaks or you have leaks, you can wait months for someone to come out," said Geneva Eaton, a 73-year-old resident. "Then when they do, they just do a cheap job to fill out their work orders."

Security was not on duty at the Hacienda at about 2 p.m. Thursday, and the sixth floor showed extensive evidence of water damage. Stagnant water sat on some of the walkways. In response to complaints Tuesday, Jones issued a departmentwide directive Wednesday declaring zero tolerance for "anything less than exemplary customer service" in dealing with tenants.

City leaders said they will hold meetings this week and hear a more detailed report from the housing authority at Tuesday's council meeting, or another day if that meeting's agenda is too full.