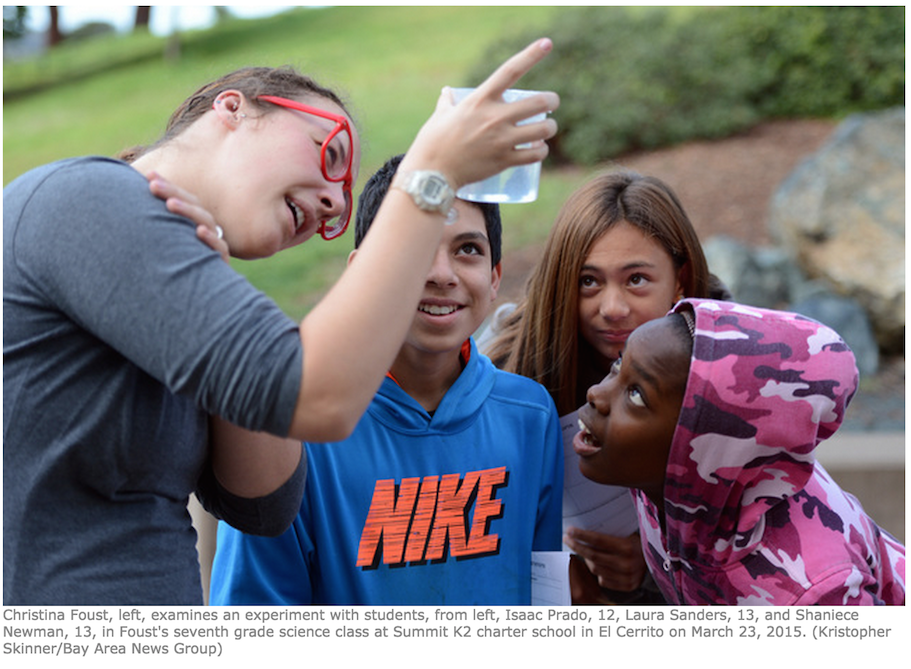 RICHMOND -- Steve and Susan Chamberlin built their fortune as a developer and an architect, and now they are spending tens of millions to improve education for kids who live within West Contra Costa's low-performing school district -- in some of the poorest areas of the county.

"We began to read about K-12 education and to educate ourselves," Susan Chamberlin, 72, said. "And as we did, we came to realize the school district we lived in was not doing a very good job of educating the kids who live here. I would say it's true in general and certainly true with kids of color."

The Chamberlins, who met in a public high school in Hawaii and have been married 48 years, started the Chamberlin Family Foundation in 2006. They followed that with the not-for-profit Education Matters last year.

While many parents and educators appreciate the couple's commitment of their vast wealth to the well-being of West County children, their largesse has created a quandary for some in West County education circles. And their fervent support for charter schools and political spending during the November election drew criticism from some district trustees.

"There are some people who think we have an adversarial relationship with the district," Susan Chamberlin said. "But, we're putting a lot of money into programs in partnership with them. It's not just about charters. We're trying to focus on improving academic quality."

Since its beginning, the Chamberlin Family Foundation has invested about $5 million in West Contra Costa public K-12 education, including school district and community organizations that support students. It provides small grants to teachers and has helped fund several large initiatives, including one that provided books to all kindergarten classrooms in Richmond and San Pablo. The foundation also brings Teach for America educators to the district, and helps fund a leadership program that trains district teachers to become principals.

In addition, the Chamberlins are spending more than $35 million -- including land, design and construction costs -- to purchase properties and build school campuses for high-quality charters in El Cerrito and Richmond. They donate the properties to Education Matters, which, the Chamberlins hope, demonstrates that they will not reap any financial rewards from an influx of charters in the district.

"I think they've made some significant and innovative investments in local education," said district resident Ben Steinberg. "They've made investments in both traditional public schools and charter schools that help provide access to good education for every child. I think that has been a really important commitment that no one else in our community has been able to match. I think we're very fortunate, and I hope they can find ways to get our community to engage more deeply in public education." But some district officials have expressed concerns that the spread of new charter schools will further erode an already dwindling population in traditional district schools along with the state money the district receives to educate students. And the couple's recent foray into political spending to sway the school board election has concerned others.

The Chamberlins contributed heavily on behalf of successful candidates Elizabeth Block and Val Cuevas in the November election, both directly and through a political action committee sponsored by Education Matters. The PAC spent more than $87,000 on behalf of Block and more than $59,000 on behalf of Cuevas; the Chamberlins each contributed $2,500 directly to Block's campaign, and Susan contributed $2,500 to the Cuevas campaign. The PAC also spent more than $30,000 on campaign literature opposing incumbent Trustee Madeline Kronenberg, who was re-elected, and more than $5,000 to oppose unsuccessful candidate Peter Chau.

During the election, Chau complained about "millionaire spending" on the campaign that he said he would not be able to match.

Current board President Todd Groves, who accepted a $500 election contribution from Steve Chamberlin during his election campaign two years ago, said Thursday that he shares the Chamberlins' passion for helping students succeed and appreciates their commitment and contributions to district programs to improve teaching and help children. But he said he was concerned about the amount of money spent in the November board election -- including thousands of dollars to oppose candidates, and he disagreed with their vision of charters as a solution to district woes.

"I don't share that certainty that charters are going to promote a more efficient system as a whole," Groves said. "It's complex. And it is possible to do damage. That's my fear. The district system is not robust right now. It's surprisingly fragile. I don't want to accelerate decline. We've got more charters than anybody else in the county right now. I've studied this, and there's a lot of peril in any direction you take."

The Chamberlins disagree, pointing to charter schools such as Summit that match the demographics of the district, yet are seeing more positive results. They also defend their campaign contributions, saying they helped tip the scales away from candidates supported by contractors and others who benefit from the district's $1.6 billion bond construction program, which has diverted attention away from academics.

They purchased the historic Chung Mei home for boys in El Cerrito on property that also houses modern buildings leased by the Summit K2 Charter School. They recently completed renovations on the historic building, which they hope to lease to Summit as needs grow.

The Chamberlins are also in the process of constructing two new school buildings on property near the Hilltop mall in Richmond specifically for charters. One will be leased by the Aspire Charter School and open in the fall; the other building is not yet leased, Steve Chamberlin said.

"What we came to realize was that if you had a facility, you could attract the very best schools here," said Steve Chamberlin, 72. "You'd be hard-pressed to find a better school operator in the state than Summit. They were interested in being here, and we were interested in having a great school."

Susan Chamberlin mused that some West Contra Costa residents may be tempted to pretend they live outside the district so their children can attend better schools.

"What if one day people would lie about where they lived so they could get into a West County school?" she said. "Why can't that be a goal? We can do it."

Additional details about the Chamberlin Family Foundation are available by visitingwww.cffoundation.net.