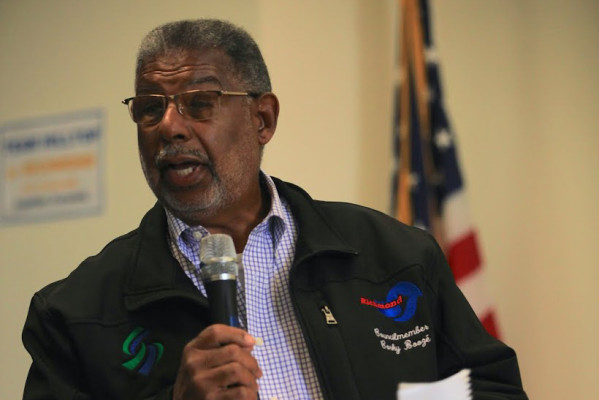 It has been like pulling teeth getting the Council and the Mayor and council member Jael Myrick to work with me to solve the problems of the Richmond Housing Authority. I have been the Liaison to the Housing Authority on City Council for four years, and in this time I have constantly seen that the egos of council members have been put in front of the quality of life for the people living in public housing. These residents have suffered from it, and we councilpersons need to park our personalities at the door to deal with these issues whether we like each other or not.

As liaison, my role is to receive information from the Housing Commission and report to the council anything that they don't know. But every time I bring something to the Council, I get shut down by the Mayor, Jovanka Beckels, or Tom Butt. Other times, when I try to get more information from Tim Jones or Bill Lindsay, I'm just ignored. It always becomes personal, and this has happened since the beginning.

Last February an ad hoc committee was assembled to tackle the problems at the Hacienda. The Mayor, Jael Myrick, and I make up this committee, and coming from the inside, I can tell you that the Mayor has used my presence as an excuse not to get things done. Back in March when the committee was formed, it was decided that we would get these tenants out of Hacienda within 90 days. The ad hoc committee's first meeting was with HUD to make this happen, but HUD told us that they weren't going to give us any additional funds to move the tenants out unless we went through their application process. I was furious about that. Just days before we all agreed that we had to get these tenants out, and I fought to keep to that promise, but no one else was having it. I was up in arms and I could see the Mayor just shaking her head wanting me to "calm down." Whenever I would get angry about how we weren't making any progress, I would be told that I was out of order, and that was the Mayor's excuse for not engaging with me or with the issue.

Still, throughout this 90-day period, I was out at Hacienda on a regular basis talking with tenants and hearing their problems. On the 60th day Tim Jones went to the building for another meeting and he reiterated that they would all be moved out in 30 days. I realized then that Tim Jones had been lying to these tenants, and that they didn't actually know the findings of the ad hoc committee. Meanwhile we had a room full of scared, mistreated tenants who wanted to know when they could finally move out of their units, but the truth was that no one was doing anything about their problems.

As an elected official I am totally disgusted that the Mayor and the Council has let this go this far because they don’t like me. They are punishing the people of the Hacienda because of this, and that’s totally wrong. They don’t have the right to do that. The Mayor should have taken a lead role and said, “Hey, how do I work with you to solve this problem?” But that just didn't happen.

It's not just the Mayor, either, that is being difficult around this issue. The city manager and the Vice Mayor refuse to work with me to solve this problem. Look at the City Council meetings. Every time I bring up the housing authority they either shut me down, or say it’s not on the agenda.

I used every opportunity I could to talk with Tim Jones, or the Mayor, or anyone else on the council to see that we kept out promise to Hacienda's residents. I would constantly receive blank stares and non-responses when I would talk to them. Everyone acts like they're tip-toeing around a land mine when they talk to me, and all I want to do is get the tenants out of these units like we said we would. Over the past seven months, the ad hoc committee has met only four times, and there are no concrete results from these meetings.

We have residents who are still living in apartments covered in bed bugs and mold -- this is no time for petty arguing. We had Tom Butt saying all the tenants acted like they were living in hotels and expecting maid service, and we have the Mayor who won't even talk with me. Why are we doing this? Why bother being on City Council if you're just going to bicker and continue to ignore the most vulnerable residents living in our city? It's time to get over our differences and save the residents of Hacienda.