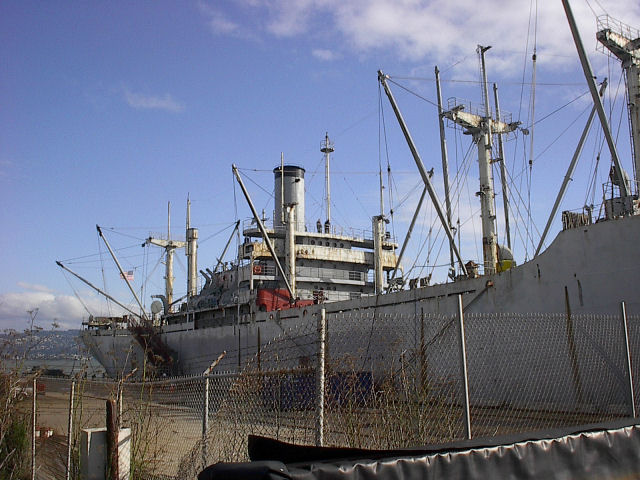 The city budget wasn't the only source of contention when the Richmond City Council met on Tuesday night.  During closed session, the Council discussed the relocation of the SS Red Oak Victory.  Following a column on the Council's lack of consensus by Chris Treadway of the Contra Costa Times, both Mayor Tom Butt and Councilmember Jovanka Beckles took to social media to share their sides of the dispute.

Effective lobbying by Foss Maritime and Riggers Loft Wine Company sank an opportunity to combine visitor attractions in a single location as the City Council voted unanimously, with only me dissenting, to move the Red Oak Victory to Basin 1 as soon as possible.

In my opinion, the vote was short-sighted and disappointing, apparently signaling an end to a long and productive working relationship between me and the RPA whose support and votes could have turned the tide in a different direction. We have collaborated for years on issues relating to the Port, the Rosie the Riveter WW II Home Front National Historical Park and the Riggers Loft, but it appears the RPA now wants to go a different direction.

I was especially disappointed in the resistance by the Riggers Loft Wine Company, who would never have even had the opportunity to move into the Riggers Loft without the initiatives I pursued to save the building and rent it to provide an income stream for the Port of Richmond. No good deed goes unpunished.

The Red Oak will now be isolated in a location that does not have adequate parking to support its growing number of popular events, and visitors to the Riggers Loft Wine Company and the Whirley crane will be forced for years to look at the vast collection of rusty metal shacks and junk equipment that Foss has assembled at Basin 5.

Councilmember Jovanka Beckles, one of the RPA councilmembers referred to in Butt’s post, responded to his e-Forum commentary with a post to the Facebook group realRICH, a forum devoted to Richmond residents discussing Richmond issues:

What kind of mayor trashes his city's businesses for standing up for themselves? Mayor Tom Butt sent out his misguided eforum this morning, filled with vindictiveness that I've not seen in a city leader before. He wants to punish two businesses, one being the winery, for sharing information with other elected officials. In fact, they were amicable and had no preference what so ever to where the Red Oak Victory ship will be docked. They stated that where ever the council decided to dock it, they will be sure to send their customers to visit it. They stated that they are even willing to help with a fundraiser for the ship. They are willing to work with the city in any capacity. Yet, Tom is trashing them and stated he is canceling the Mayors conference later this year that is planned at that venue; something this business was looking forward to. They didn't lobby councilmembers but instesad, councilmembers called a meeting with them to clarify information given to us by the Mayor and staff. They were courteous and met with us as requested. In fact, one of the business owner stated, "Please, I want what's best for the city. I don't want to make the Mayor mad."

WTH?! A business owner was afraid of making the Mayor mad because he obviously had been threatened before.

That action by this current Mayor, has got to be bad for business once the word gets out that Mayor Butt is a bully who uses his influence to intimidate people and businesses. That's not what Richmond is about. That's not what the Real Rich is about, so I hope they and others who want to do business with our city won't hold that against us. When R&B Wine, also known as Riggers Loft Wine Company opens up shop, I hope you will join me and other community members in supporting a wonderful addition to our community. It will be similar to the winery at Jack London, only with better views!

Coverage of this issue continued with an updated article by the Contra Costa Times later in the day on Wednesday, which clarified that the Council voted 6-1, with only Mayor Butt dissenting, to move the SS Red Oak Victory to Basin 1.

We will continue to cover this issue and any related commentary as it develops.