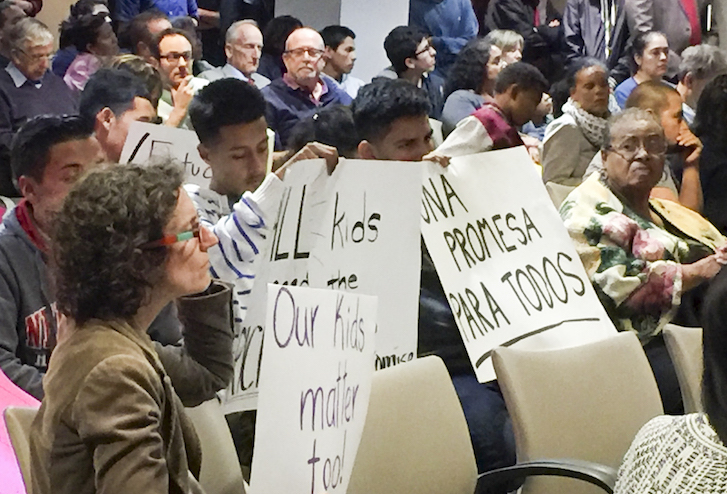 Richmond City Council failed to come to an agreement on key aspects of the $35 million Richmond Promise scholarship program on Tuesday in a lengthy meeting that swung from hectic to tedious.

Council was slated to provide direction to city staff on two key elements of the promise. The issue of eligibility — which students from Richmond West Contra Costa Unified School District (WCCUSD) traditional public schools, the public charter schools, and private schools will be able to receive scholarship funds — was considered in tandem with how much each student would receive, depending on attendance at a community college or four-year institution.

These two decisions have lasting implications on the long-term sustainability and accessibility of the promise program. Before a room packed with charter and private school supporters waving signs, jeering, and applauding throughout the meeting, the divide between the desire to be as inclusive as possible yet ensure that the Richmond Promise program doesn’t immediately burn through the entirety of its $35 million proved difficult to bridge for councilmembers.

“Despite the tension and political interest in the room, this is a really exciting moment,” said Vice Mayor Jael Myrick. “If we do this right it can last…into perpetuity. That’s my number one goal here. How do we do this right so it lasts for generations to come? On the flip side, if we just do what’s convenient now or looks good now, those kids in third grade now won’t be able to benefit from this.”

The general consensus among councilmembers and the vocal public present was to push for inclusion of both WCCUSD traditional public schools and public charter schools. Inclusion of students attending private schools was a much more contentious subject, though, with several members of the Council voicing their opinion that if parents can afford to send their children to a private school, then they can also afford to pay to send their children to college.

“This program was never, ever promised as a program that would include private schools,” said Vice Mayor Myrick. “This is a public agency, this is a public resource, they are for public schools. We need to make sure this money lasts and that the kids who need this money the most are able to benefit from it.”

The debate then branched out into the issue of how much students should receive based on their attendance at a four-year institution or a community college.

Some councilmembers and members of the public echoed Councilmember McLaughlin’s push for equal distribution of funds for each group of students, but city staff did not have current information for how long the money would last if it was distributed in this way.

The distribution model presented by city staff on Tuesday that gave equal funds to students at community colleges and four-year institution would provide students $4,000 per year but bankrupt the Promise program within two years. After ten years, such a plan would put the Promise program over $90,000 in debt.

“There is a desire to do things, but the numbers don’t match…We’re saying we have four plus four and want it to equal 68,” said Councilmember Vinay Pimplé. “I am concerned that we are going to vote on something that is completely inconsistent with what we want.”

Mayor Tom Butt also grappled with this issue. “I’m not sure where to go from here, but I’m inclined to make it go as far as it can go while we look for other money rather than burning it up right away,” Butt said.

To resolve this conflict Council directed city staff to crunch the numbers on what it would take to provide greater parity between students at four-year institutions and community colleges and come back later in the evening with an updated report.

The clock was minutes from 11:30 pm — the time limit for meetings — when Council decided to interrupt an item already mid-presentation and call for a vote to extend the meeting to handle the Promise issue. After a quick flurry of motions and substitute motions, Council failed to come to an agreement about extending the meeting, and the meeting was promptly adjourned at 11:30 pm.

Council will take up the issue of the Richmond Promise at the meeting after next, at which time city staff will present updated numbers about equal fund distribution between students at community colleges and four-year institutions.

If the details of the Promise can be hammered out, Richmond high school students graduating in the class of 2016 are expected to be the first beneficiaries of the scholarship.