The law is the law—or at least that’s the way it ought to be.  The law says that one person cannot vandalize the property of another person.  Whether that property belongs to a person or to a company, vandalism is still vandalism.

Every time an election comes around Richmond candidates see many of their campaign signs defaced, destroyed or stolen.  While it’s still a crime, too many people—including City officials working in City Hall or at Police Headquarters—tend to turn a blind eye to these thefts and vandalism.  They seem to consider that these crimes are part and parcel with elections here in Richmond.

Because so many of the candidates and the issues have become polarizing, sentiments have been ramped up to the point where the thefts, the vandalism and the destruction of personal property has escalated beyond anything that should be tolerated. 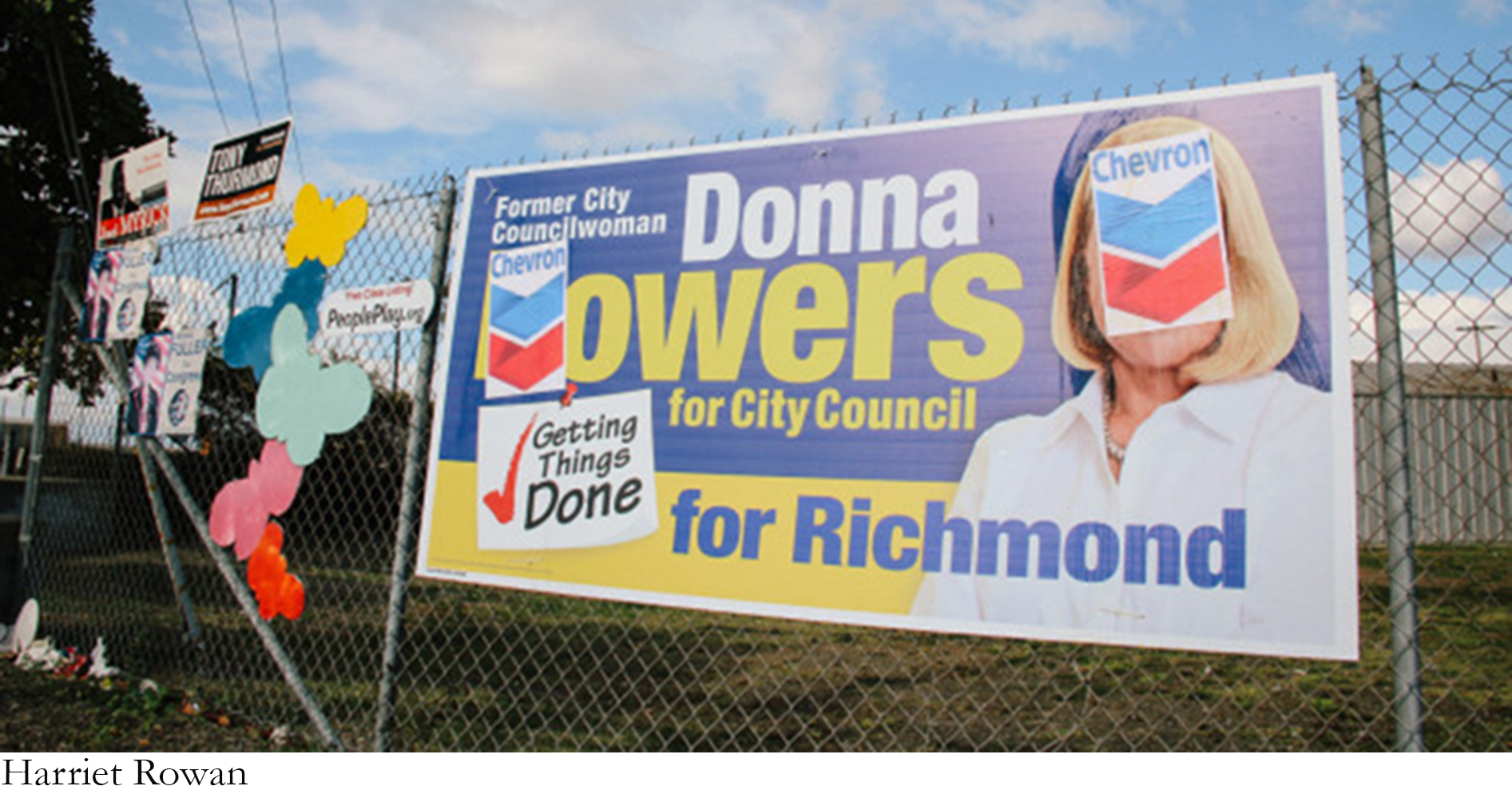 Is it really helping Richmond when people are using Chevron as the litmus test to determine whether their neighbors are good or whether they are bad?  We see it at the City Council meetings, we see it at the candidate forums and now we’re seeing it on the streets on the campaign signs.

People who would ordinarily be described as good and decent people are taking matters into their own hands to mete out what they believe to be justice.

Candidate Uche Uwahemu has been telling anyone who listens that his campaign signs are disappearing at an alarming rate.  Candidates Bates and Boozé are saying the same thing.

Early on the morning of Wednesday 14 October activist Michael Ali and his family ran outside their home to see “an old friend” vandalizing and attempting to steal campaign materials in their front yard.  They gave chase but the culprit eluded them.  Police reports were filed.

In previous elections members of the opposition took to the streets with utility knives—the same kind used by the 9/11 airplane highjackers—to slice through the $100 corrugated plastic signs of those candidates and causes they disagreed with.

Now we’re seeing vandals affixing stick on full sheet Chevron logos to the large signs for Council candidate Donna Powers and have taken to spray-painting their own sentiments on the Nat Bates billboards.

In the photo showing the Nat Bates billboard the top photo was taken early on Friday October 10th and the bottom photo was taken on Sunday October 12th.  Between the first and the second photo the billboard had been replaced yet the vandals returned to destroy the property of other people.  Considering the cost of these billboards and the fact that this vandalism was perpetrated by the same person(s) [same paint and handwriting], would this be considered a felony? 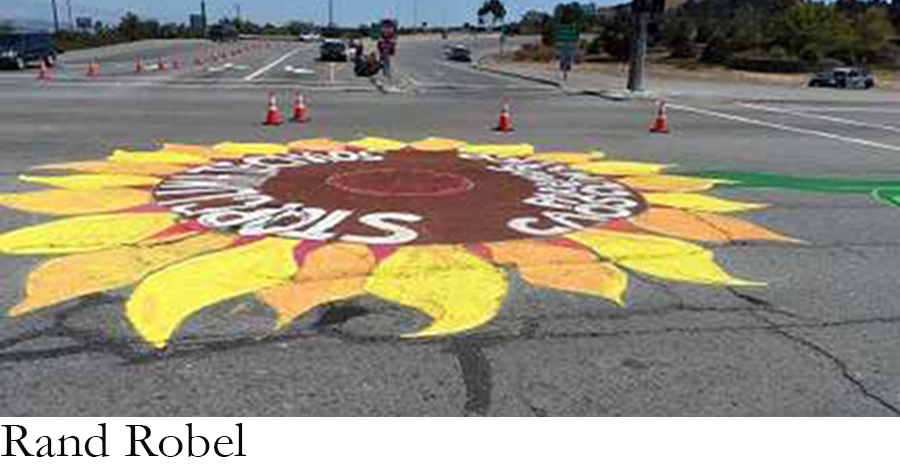 On the evening of Tuesday October 7th Pam Bilbo witnessed a well known community activist as he was guiding three of his associates as they defaced another billboard on Ohio near 23rd.

NOTE:  In all three instances noted here the identities of the vandals are known.  These persons are well known operatives of a progressive organization with ties to the highest levels of City government but because their identities cannot be proven in a court of law there is the risk of a libel suit if their names were listed here.  However, the police have been apprised and appropriate action is hopeful.

In earlier elections some of these same highly placed community activists have been seen in the proximity where vandalism has occurred and some have even used their size, girth and attitude to intimidate election volunteers.  There are widespread allegations of harassment and intimidation at the polling places but, without proof, the police are limited in what they can do.  When the police are called the harassers run off before the police can arrive.

When articles are being posted on the numerous online newspaper sites and on Facebook, what we’re seeing almost every time are comment authors attempting to justify these crimes because of what they believe to be bigger crimes committed by Chevron.  They’re meting out their own form of justice just as we used to see in San Francisco 160 years ago when the vigilantes ran the town; just as we saw in the deep south when the “good” people saw a crime they believed to have been committed by a Black person; and just as we saw a couple of years ago when anarchy ran rampant in cities like Oakland and San Francisco where Occupiers justified their destruction of businesses because of perceived slights by the 1% against the 99%. 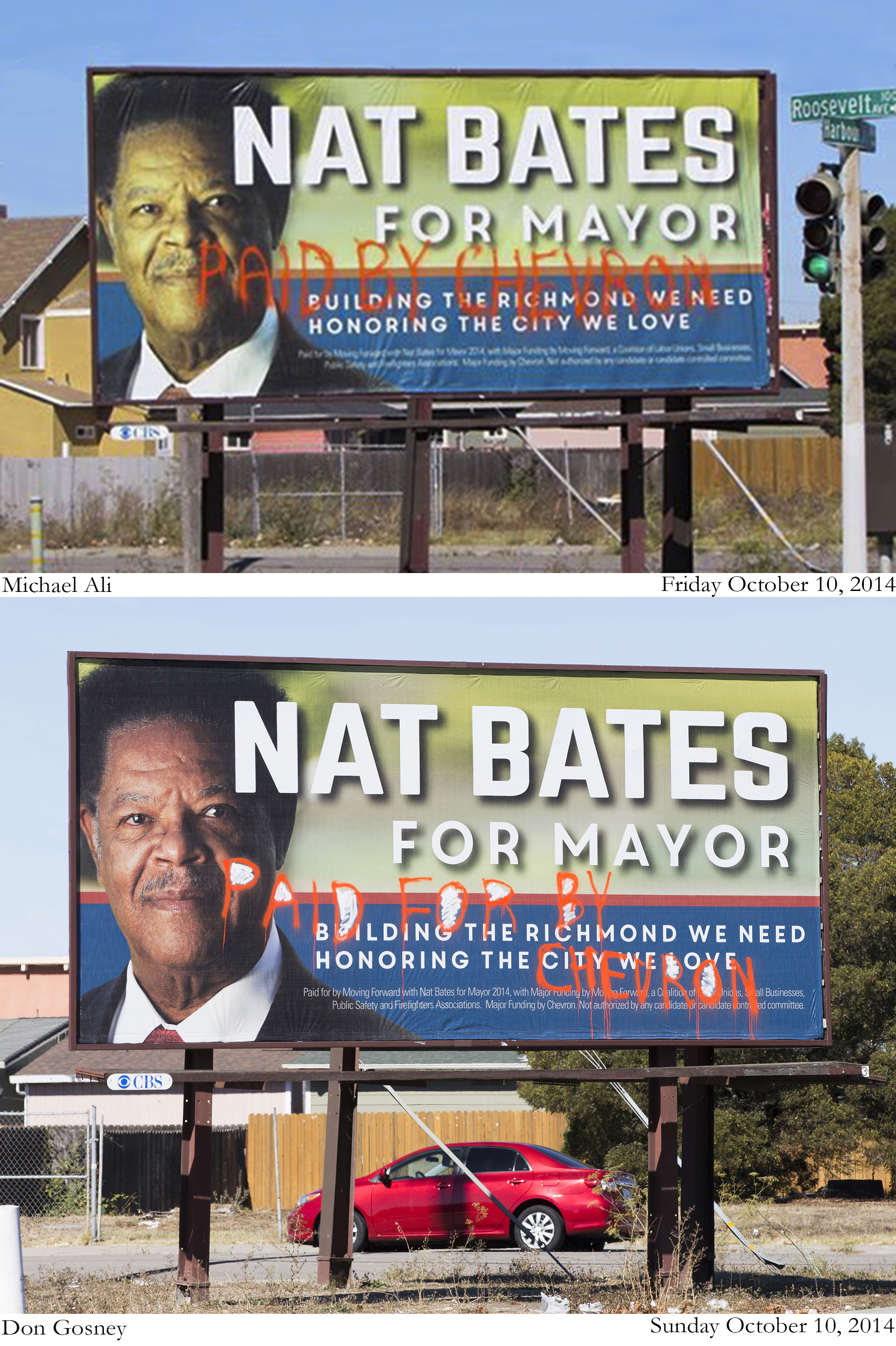 How could things have turned so badly when people—people who forty years ago marched for civil rights and demanded peace—have turned to violent and destructive actions that are so counter to the words they chant?  What happened to their acceptance of divergent points of view?

We’ve had some of these people march on Chevron where, on August 3rd, 2013, they arrived in front of Chevron Research and Technology and held their rally.  Their planned and advertised actions required significant police presence (mostly on overtime). Even though some of the organizers of this event were elected officials, they failed to secure a parade permit. Fortunately—this time—their protest was mostly nonviolent.  Of course, they took liberties by vandalizing public property by painting a large sunflower mural on the Richmond Parkway.  More than 160 protesters were arrested and the affair cost the good people of Richmond more than $10,000 in personnel, equipment and the subsequent removal of the sunflower mural painted on the city street.

Four years ago there was a large campaign center on the corner of Barrett and San Pablo Avenues set up to promote Labor friendly candidates.  Starting on the first day it was opened (when a large triple paned safety glass window was shattered requiring a $4800 replacement).  Over the course of the next several months there were seventeen acts of vandalism to this campaign center (all documented with police reports filed).  Even after the election when the opposition was still celebrating their victory, the day after the election the large sign out front of the center was vandalized and destroyed.

All too frequently we’re seeing vandalism of personal property, the vandalism and destruction of public property and even threats of personal violence against people who sit on opposite sides of the table.

How is it that peace loving uber liberal progressives are turning to hostile actions?  What is it about their message that the opposition is having such a tough time embracing?  And why do they feel that the ends justify the means?

Since when did violence and lawlessness take the place of a reasonable discussion and compromise?