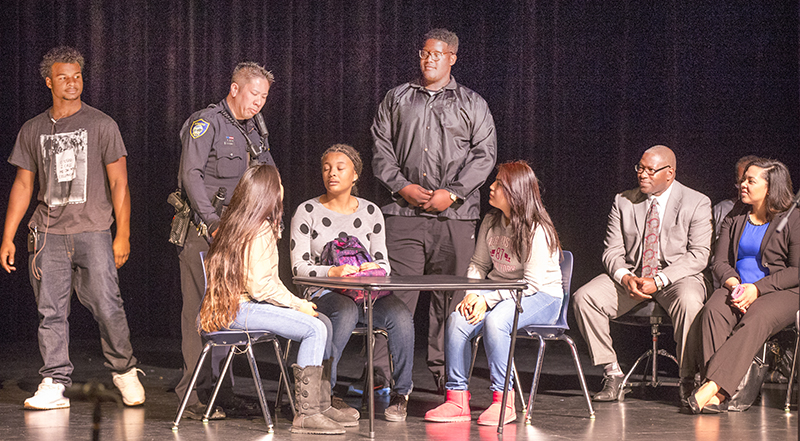 Ferguson, Chicago, Baltimore, New York City, San Francisco, Oakland, Richmond.  What do these cities have in common?  They’ve all been the focus of major news stories because a young man of color had a confrontation with an officer of the law that went sideways with the police either killing or seriously injuring the young man of color.  This is an all too common story these days.

Students at De Anza High School recently attended a presentation to help them understand what their rights are when confronted by a police officer.

Judge Judy Johnson, a product of Richmond pubic schools, opened the presentation and told the group that “You can go to college.  You can be anything that you want to be.  What will limit you is not opportunity but your own state of mind, your own willingness to work hard, and excel, and live your life and your dream.”

With all that has been happening across the country, she provided advice from someone who has an intimate knowledge of the legal system.

For those that would listen, she told them: “If you feel you’ve been disrespected, treated unfairly and inappropriately, do NOT confront the police officer in the street.  Wait and assert your rights in court.  You’re not going to get justice in confronting the police.”

Terry Wiley from the Alameda County District Attorney’s Office, relayed a story about how when he was pulled over and asked for an ID, he considered that since he hadn’t done anything wrong, he didn’t have to provide that ID.  Upon further consideration, though, he told the group that he showed his ID “not because he didn’t want to get shot—I’m doing it because I’m trying to find the path of least resistance.”

He continued and explained that in the long run, it was better to “comply now and complain later.  If the officer wants to talk to you, it’s better to be cooperative.”

Wiley had four important instructions for when an officer might detain someone:

Interim Chief Allwyn Brown explained why the police do things in the way they do.  He pointed out that for the safety of everyone—the police officer, the person being questioned, and the nearby public—procedures have been developed.  These include determining who the person being questioned is, whether that person is wanted for an outstanding crime and whether that person has a weapon on their person.

Wiley advised drivers that when they are pulled over, after pulling to a complete stop, he suggested that if it was nighttime turning on the inside dome light to illuminate the inside of the vehicle so the officer can clearly see what’s going on.  He also advised that the driver place their hands clearly on the top of the steering wheel and that the passengers place their hands on the dashboard or the seat in front of them. The point is to make sure that the officer can clearly see everyone’s hands.

Students from PURE performed several skits demonstrating actions that can force an interaction with the police.

Defense Attorney Damone Hale provided insight from the other side.

In closing, he pointed out that “If you’ve got something to hide, I’ve never seen anyone win that confrontation.”

The WCCUSD, the De Anza staff and the De Anza Law Academy Advisory Board provided valuable information so these students might not be the lead story on the 6 o’clock news.  Dozens of students in this audience, though, heard virtually nothing.  They were either sleeping, talking with their buds or playing with their smartphones.  Several came in with attitudes and the police officers in attendance had to step in to keep those attitudes in check.

For the several hundred that were paying attention, though, perhaps this will make a difference and help.