There are still in the neighborhood of 5,800 ballots yet to be counted countywide.  There is no way to determine how many are West County or Richmond ballots.  The Elections Office has posted they expect to have an “unofficial Final” set of results posted by 5 PM this Friday.  The election must be certified within 30 days of the election (8 PM next Wednesday).

If we use the Richmond Mayor’s race as an indicator of approximately how many people voted (they can only vote for one candidate so the numbers are closer to reality than the other races), there were an additional 2,537 ballots counted (28,585).  So far, this is a 47% increase in the number of ballots cast over a similar race four years ago.

In the Richmond Council Council race, Demnlus Johnson and Eduardo Martinez have solid leads that are not likely to change.  For third place, though, this race is still in play. Former Councilmember Nat Bates has retaken third place over Vinay Pimplé by just 20 votes.  Pimplé’s lead over Cesar Zepeda is just 53 votes.

The race for the 15thAssembly District has been not and heavy for more than a year.  Richmond Councilmember Jovanka Beckles has closed the gap on Buffy Wicks but Wicks still has a 14,413 vote lead (55.37% to 46.27%).

Contra Costa and Alameda Counties have about an equal number of voters in the Assembly District but for this race, the Alameda County voters cast their ballots significantly more than the Contra Costa voters did (62% to 38%).

One of the other races that locals have been following is the State Superintendent of Public Instruction.  Former Richmond Councilmember, WCCUSD Trustee and Assemblymember Tony Thurmond started off behind right after the election but has gradually increased his lead over the Charter School Champion Marshall Tuck. Two weeks ago Tuck conceded the race but a concession is not legally binding.  Had the millions of uncounted ballots gone his way, is there any doubt that he would have unconceded?  As of tonight, Thurmond has increased his to 170,499 votes out of 10,169,385.

Come back on Friday night when we should have the ‘unofficial Final” vote count. 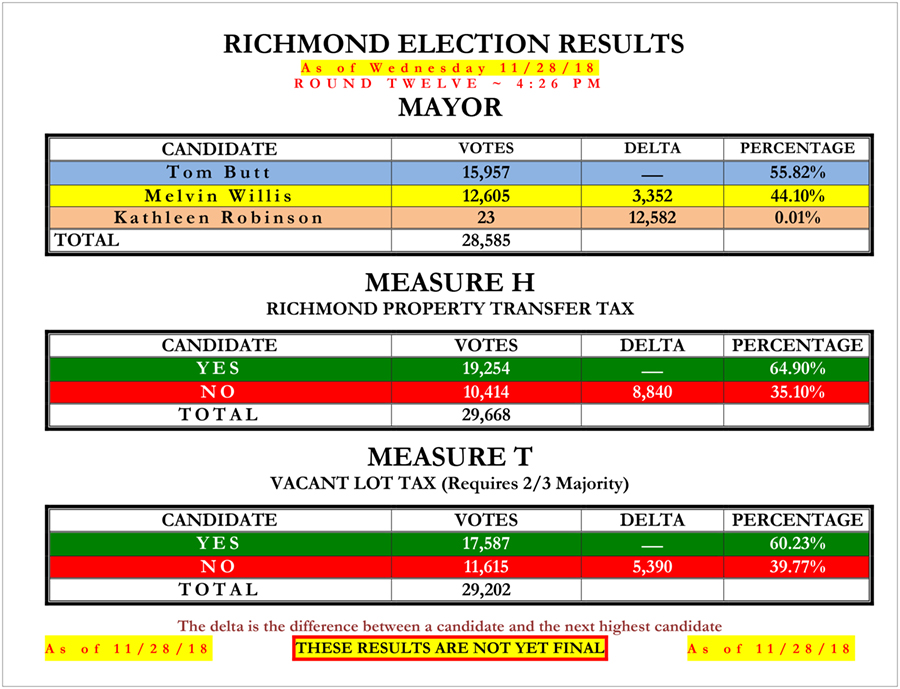 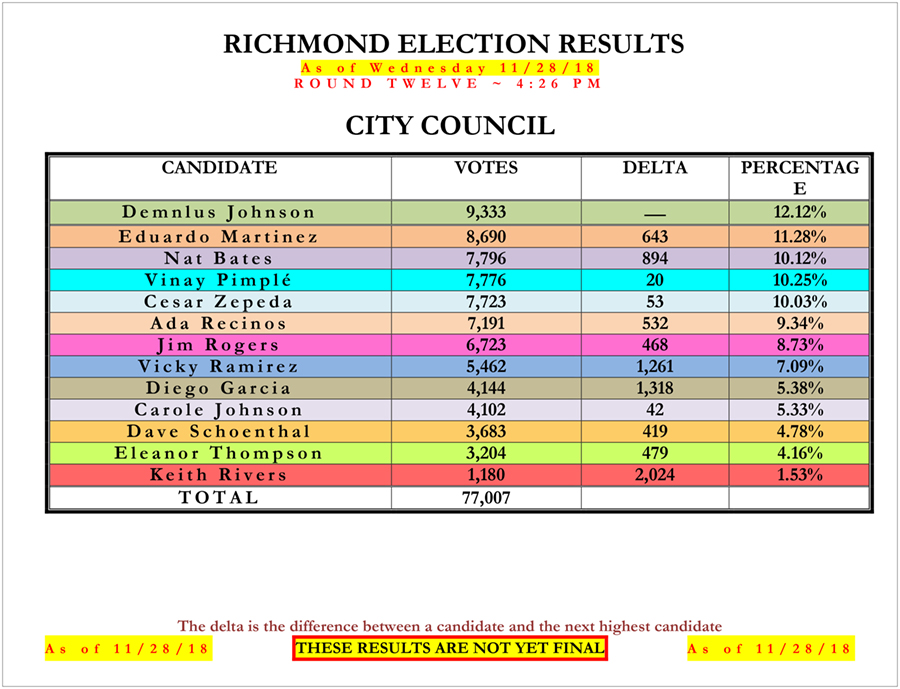 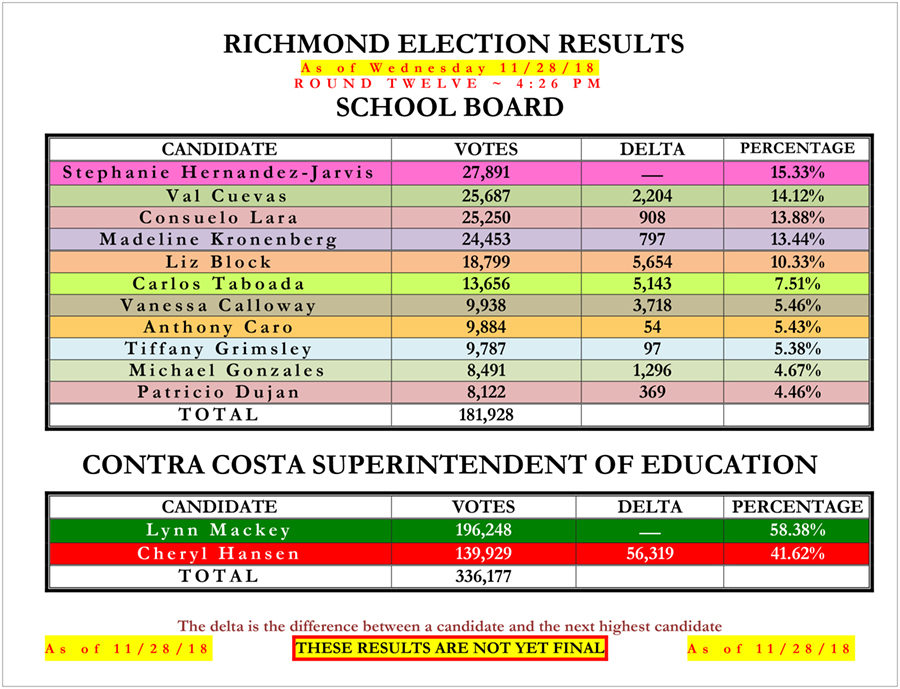 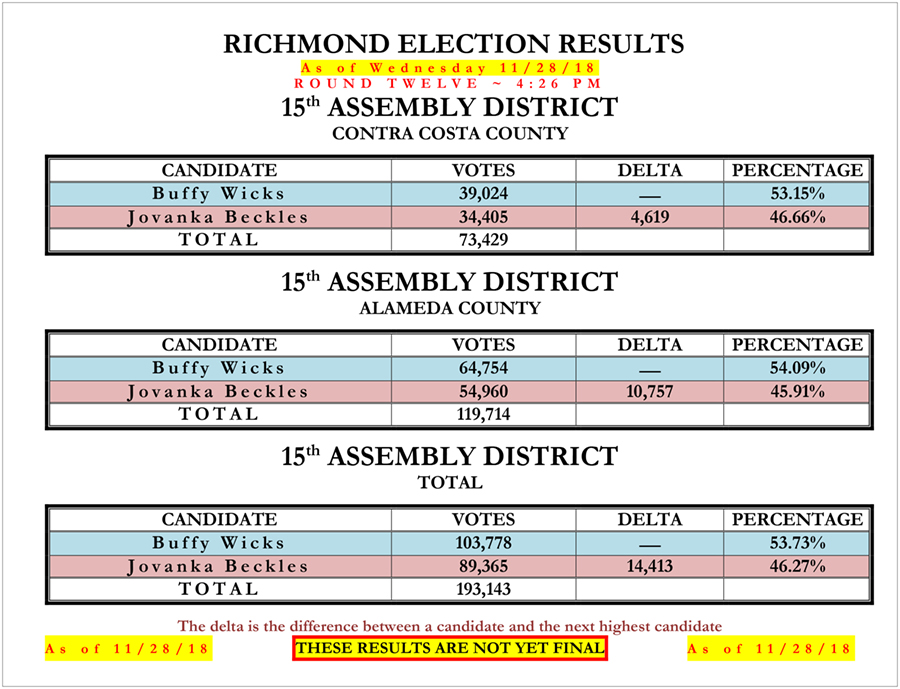 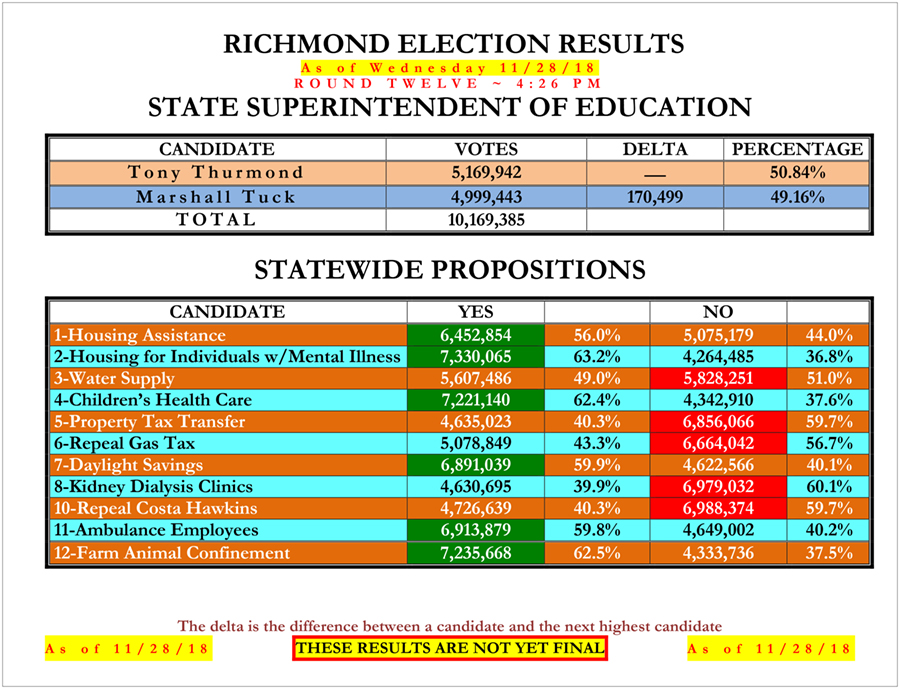