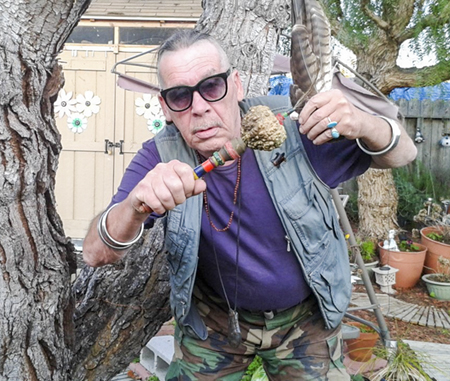 I am the San Francisco Bay Area delegate to the Inter-Tribal Council of California and Chairperson of the California chapter of the United Urban Warriors Society—agencies dedicated to the advancement of our Native people and more human and civil rights for our Native people.

As a Native Advocate, I am now on the 45th day of a three month long fast for our 5 Native Nations and our allies to save, protect and preserve Bears Ears National Monument in southeast Utah against the proposed eco-rape by the so-called 'Trump administration'!! My daily constitutional includes native ceremonies, songs and prayers to the Creator for spiritual guidance. (Originally, my fast for Bears Ears National Monument was only intended to be for one month, but now has been expanded to three months and is expected to end on May 12th.)

The many friends and well-wishers that have called and dropped by to support my fasting for Bears Ears National Monument has helped sustain me in these trying times.