Getting to Know Richmond’s New Fire Chief: A Q&A with Adrian Sheppard 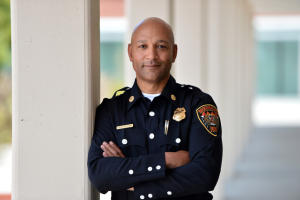 Adrian Sheppard has big plans for the Richmond Fire Department (RFD). Six months into his new role as the city’s new fire chief, Sheppard is cutting costs and bringing the community back into the RFD.

Radio Free Richmond asked Sheppard a few questions to get to know him better and to learn more about his ideas for the city.

Radio Free Richmond (RFR): Adrian, thanks for taking the time to talk with us. To start, can you talk with us about your background?

Adrian Sheppard (AS): I’ve been in fire departments for just over 18 years; I started in the city of Oakland in 1997. Before I joined the fire department, I was in the United States Air Force, and I think that started my foundation of wanting to be in the fire department — working in a paramilitary organization. Before that, I grew up here in California, moved around an awful lot in California, but I graduated from Vallejo High School.

RFR: What do you like about being in the fire department?

AS: First of all, I’m a person who likes structure, and I’ve always been service-oriented. I like making communities better. Don’t think that this is just me giving some kind of interview-like answer, because I really do feel that. [laughs] I truly believe in service. I want to serve communities to make bad situations less bad. That’s who I am, and that’s what I want to do.

RFR: How did you come to Richmond?

AS: Well, I worked my way through the city of Oakland and I held all of the different positions in the fire department. It’s not that I felt that I reached my limit of where I could go in Oakland, but I do feel that Richmond and Oakland are parallel cities. They have similar demographics, they’re confronted with the same issues.

Coming to Richmond was an opportunity for me to further venture out and to continue my mission to institute programs that better people’s lives. When I took the job in Oakland, I didn’t know how much the job paid — I just wanted to take it. Now that I’ve matured and I know what the jobs pays, I took the lowest amount offered upon coming to Richmond. They were offering me much more, but I didn’t think it would better the community to take it.

RFR: What programs to you plan to implement in Richmond?

AS: One of the most important things is to make sure that you have a very robust recruiting program that actually hires people from the community. Of the 90 sworn employees that we have, only four live in the city. And that’s not good. You’ve got to recruit people from here and also prepare them.

I want to implement a program currently in place in Oakland where the fire department gets young people from the community and puts them through a rigorous training program. Once they complete that program, they’re eligible to be hired in the fire department. The first step is reaching these people and getting them engaged in the program from an early age. Then we continue to keep in touch with them and eventually hire them. It’s not just a job — it’s changing their life and their families lives, forever.

RFR: And you’re also bringing more community accountability to the fire department, too.

AS: Absolutely. That’s what we’re supposed to be doing. The fire department is part of the city, and the city should be a part of this organization.

RFR: Tell us something more personal about yourself. What are your hobbies outside of work?

AS: Well, I run. I usually try to do no more than a 5-mile run. I live out in a valley that allows me to go out and clear my mind.

RFR: Do you live in Richmond?

AS: I don’t; not yet. I’m looking for a house right here in the flats. Don’t want to live in the hills, I want to live right downtown, off Clinton.

AS: People should know that I’m inclusive. I want people’s input. I believe I’m a steward of the people’s money, so I want to deliver the highest amount of service for the least amount of cost. So, the challenge each year for the city and the organization is to balance a budget. But it’s not so much about balancing the budget as it is about balancing services. We could just cut funds and shut down five stations, and the budget would be balanced for the city, but there wouldn’t be services. I believe that our fire department is of the people. I always say that our fire engines should be at parks where soccer games are going on to be part of the community. That’s what we’re supposed to be doing. We’re supposed to have our engines out helping kids cross the street and giving them high-fives as they make it across.

AS: That our door — my door — is always open. Come by and see me. I believe in transparency and collaborative relationships. If you have a community event that you want us to show up at, give us a call and either I or one of my representatives will be there.