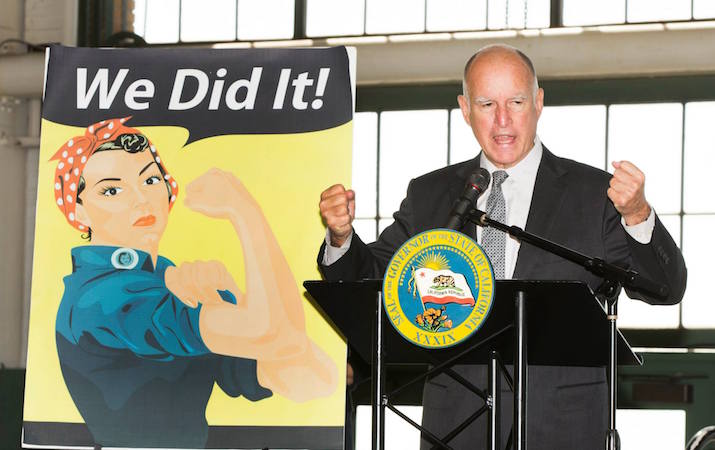 “It’s about fairness, economic opportunity, it’s about creating an equally secure future for all Californians, and, as it’s been pointed out, it’s about time.” —Senator Hannah-Beth Jackson (D-Santa Barbara) —the author of Senate Bill 358: The California Fair Pay Act

California Governor Jerry Brown joined a crowd of about 150 at the Craneway Pavilion to sign into law the California Fair Pay Act on Tuesday.  It was apropos that this occurred right next to the Rosie the Riveter WWII Home Front National Historical Park.

In framing the bill signing, Senator Jackson told the crowd, “this is momentous for the rest of the nation because in a few moments the Governor, Governor Brown, will sign the strongest equal pay law in our nation’s history.”

Senate Bill 358 intends to close many of the pay equity gaps that women often see in the work place.  The bill will help to ensure that when women perform “substantially equal work” they will be paid the same as any other worker.  Exceptions include seniority and merit.  Current law requires that the work be “exactly the same” which gives employers numerous excuses to deny women the pay they deserve.

It also eliminates retaliatory actions against employees for disclosing their wages to fellow employees, allowing both men and women to compare what they’re paid for the work they actually perform.  No longer will they fear losing their jobs or facing a lawsuit for comparing employment packages.

“With the signing of this bill, SB 358, we take a significant step towards making California stronger,” said Jackson.

When Governor Brown was called on to address the crowd, he faced a front row of real Rosies as well as several dozen young girls brought to this historic event to witness first hand the changes that will separate them from their mothers, aunts, and grandmothers who worked as second class employees, being paid and treated as less than the men they worked alongside.

According to Governor Brown, “The inequities that have plagued our state and have burdened women forever are slowly being resolved with this kind of bill.”

And with a few strokes of his pen, the role of women in the California workplace changed forever.