HELPING OUT IN A TIME OF NEED

The world has never had to deal with a calamity the likes of which we’ve seen with the Covid-19 pandemic.  Jobs lost, businesses shuttered, the economy in tatters.  The world is having to rethink how things are done.

One of the issues focuses on the food and agriculture businesses that routinely supply restaurants and schools—both of which have no outlet for the use of these food products.

The United States Department of Agriculture came up with a plan to purchase the surplus food and give it to the millions of people who need it the most.

Over the past two weekends, the Hilltop Community Church on Shane Drive near Hilltop Drive, has been distributing boxes of food to those that show up and ask.

Radio Free Richmond asked Pastor Loren Laumer to explain how this came about and how the food give-away works: 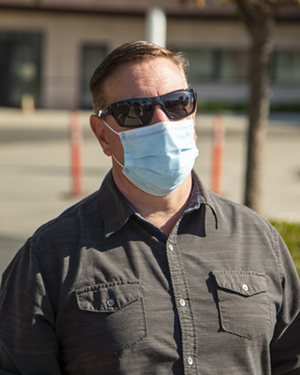 “We're getting this food from the USDA. They have a program called Farmers to Families. And so instead of farmers having to basically throw away food that they were normally producing, that they were sending to restaurants, they're sending them to nonprofits. And those nonprofits then can hand them out to people.”

“So this is with the USDA, and also with an organization based out of Southern California called City Serve. So it's those two organizations that we've partnered with.”

“By the end of today, hopefully we will have handed out 4500 boxes, all weighing between 35 and 40 pounds.”

“Every box has about 10 to 12 pounds of produce, I believe it's seven or eight pounds of dairy, and a gallon of milk, and six to eight pounds of protein. Sometimes those proteins are different. So you could have a box that has chicken, and also processed chicken like chicken nuggets, or you might have chicken and eggs. So I guess you're getting every kind of chicken from pre chicken to post chicken.” 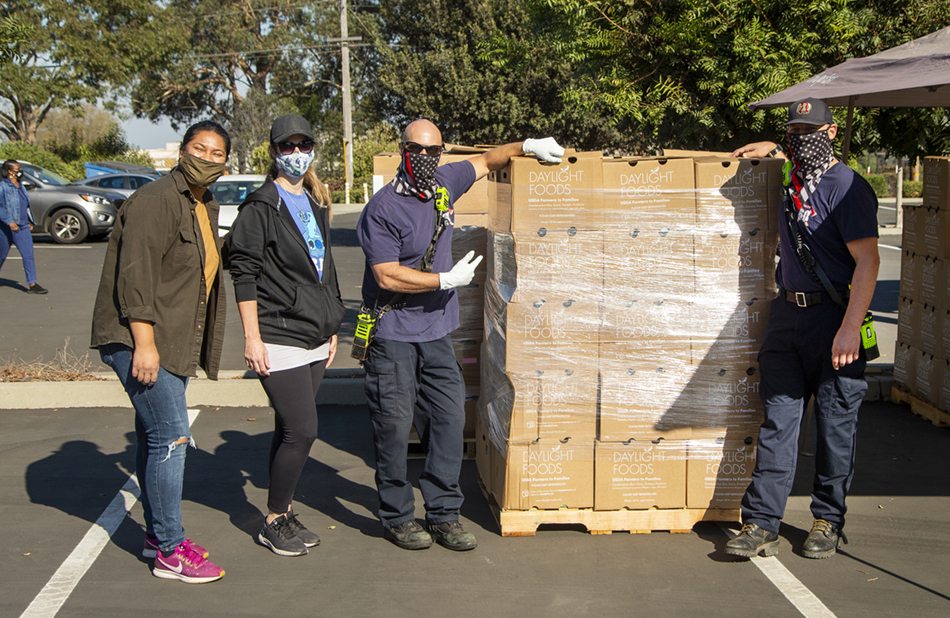 “One of the things that we're trying to do, we have a refrigerated truck here, so when we offload our first truck, we load it into a freezer truck. It keeps everything cold. But we have a deal with the USDA and City Serve that nothing will be outside more than two hours. So people get it, they go, our hope is they take it straight home and put it in the fridge.”

Deep in the bottom of these boxes there's a notice from our President and that’s been an issue of concern—even with a couple of local community activists trying to go through the boxes to remove these notices. Pastor Loren was asked how they were handling that?

“So, to be honest, we weren't even aware until somebody pulled one out and showed us. It's really, I guess it is signed by the President. There's a letter. It's from the USDA. And we agreed with the USDA to hand out the boxes as they come to us. And so that is what we are doing.” 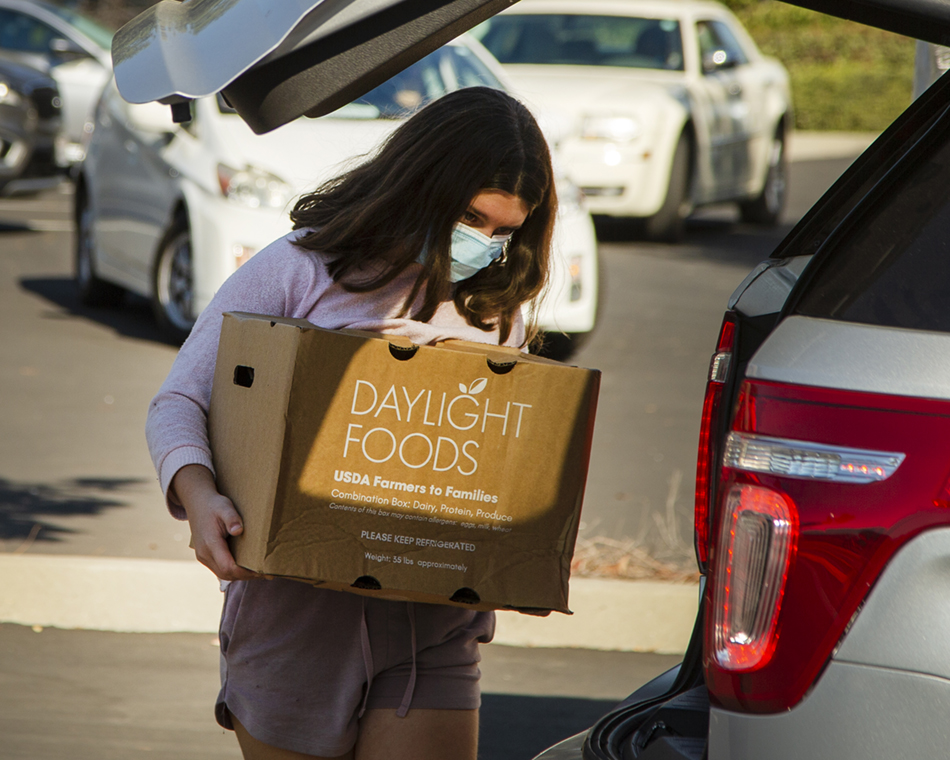 “Unfortunately, some people pulled letters out of the boxes last weekend. We didn't realize it at the time, but what that caused was some people felt like, one, they didn't like the fact that somebody's hand had been inside the box. And two, they felt like maybe someone had taken out something they should have gotten. 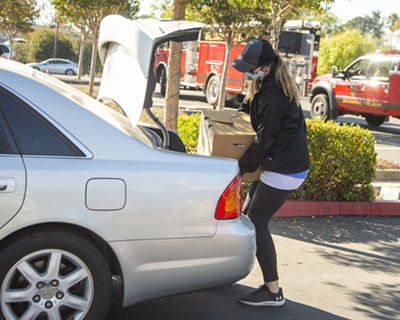 And so that has doubled our efforts. We're not opening the boxes. We are handing the boxes straight out as we have been given them.”

Right before last Saturday’s distribution was to begin, there was a horrific accident on Interstate 80 right at the Hilltop offramp where a tanker truck filled with fuel burst into flames.  Between access to the event and the shelter-in-place order, the food distribution was negatively affected.  At the end of the day there were several hundred boxes undistributed.  The organizers of this event were able to work with other nonprofits and 315 of these boxes were transferred to another nonprofit where they were placed in the hands of people who could best use them. 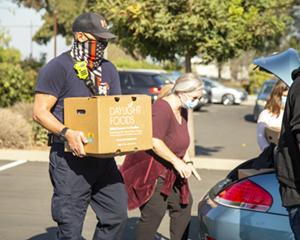 Aside from the dozens of volunteers helping to distribute the boxes, local community activist Arto Rinteela used his forklift skills to offload the pallets of boxes and distribute them to the pick-up areas.  The Richmond Fire Department also had a presence that was clearly obvious with their efficiency and willingness to lift heavy box after heavy box.

Drivers patiently waited in their cars and when they got to the distribution point, they popped their trunks or unlocked their doors so the volunteers could deposit the boxes in the cars.  To maintain the health of everyone, the drivers never left their cars. 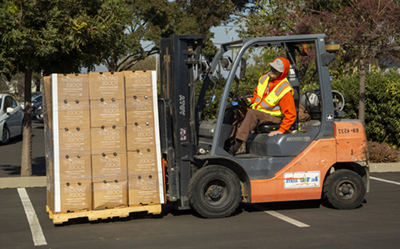 Even with the histrionics surrounding Tuesday’s election and the numerous violent protests across the country, there are still a lot of good and decent people stepping forward to help their neighbors. 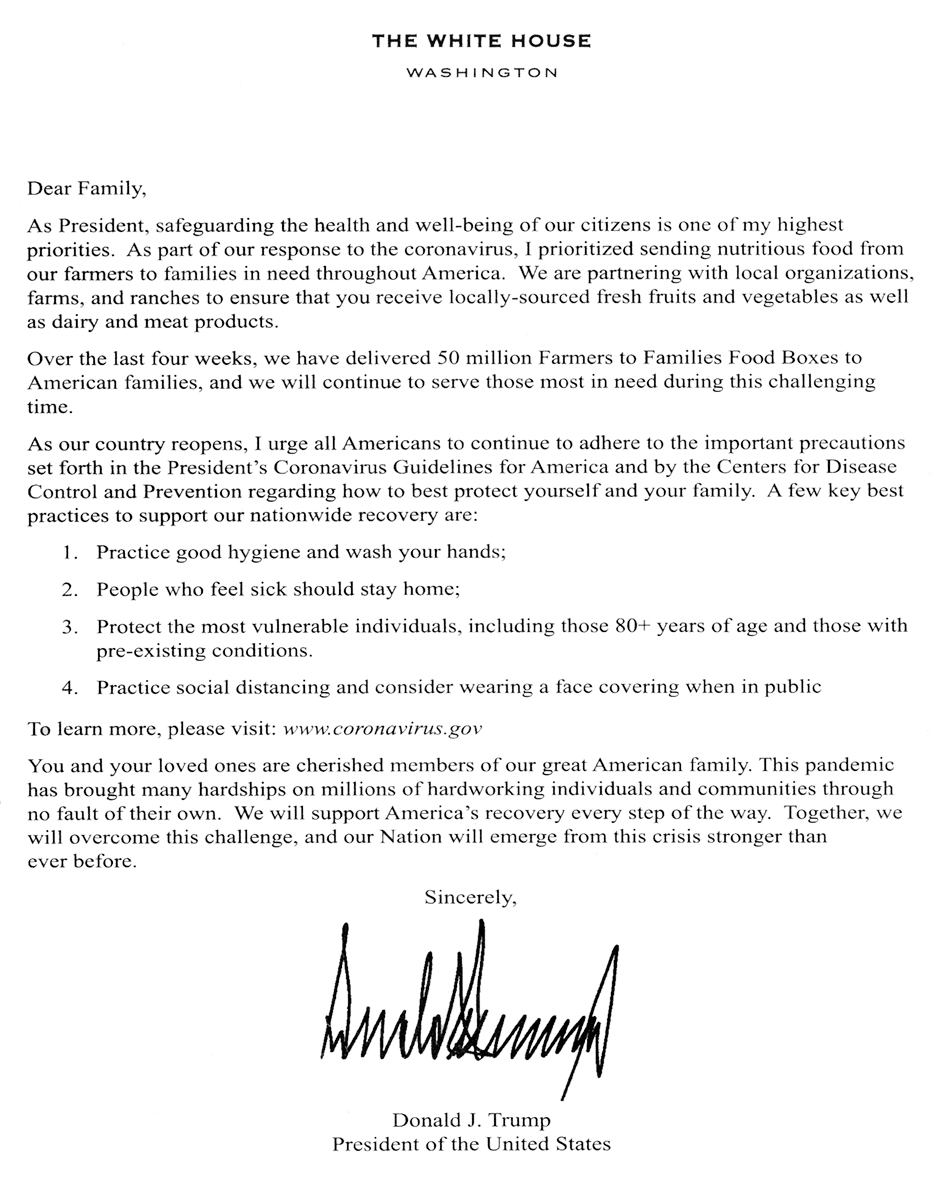