Jerrold Hatchett--More Than 50 Years of Giving Back

Mr. Jerrold Hatchett is a longtime supporter of Richmond. Over the past 50 years, Mr. Hatchett has won the hearts of many through his constant dedication and efforts to support local organizations, programs and community events.

Many residents fondly anticipate seeing and interacting with Mr. Hatchett throughout the year, as he is known for being Santa Claus and the Easter Bunny at several annual holiday events for many organizations. He has also worked with the National Brotherhood Alliance and others to coordinate the annual Juneteenth celebration for many years and supported the BMW Golf Tournament since its inception. 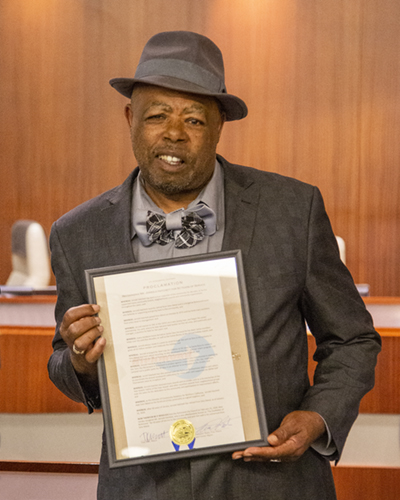 Throughout his career, Mr. Jerrold Hatchett was a well-loved fixture of LMC/Hugo Neu/Sims Metal Management in Richmond, CA for more than four decades.

Jerrold started at LMC in the 1970’s as a very young man, and began his career maintaining the yard. He became lead man working on the rail crew, and through the years, learned every piece of equipment in the yard. He eventually became yard manager, a position he held for ten years.

While manager at the yard, Jerrold would take his crew out into the community on Saturdays to paint houses or lay bricks or make repairs for those in need. And at his direction, a wooden stage was built which was lent to community organizations for countless non-profit events.

Jerrold won many awards for his contributions to the community, including “Humanitarian of the Year”, awarded to him by Irma Anderson, Mayor of Richmond.

The City of Richmond would like to show its appreciation to Mr. Jerrold Hatchett for his continuous dedication to the community and his service at Sims Metal.